Traffic in the UK has fallen to its lowest level for 65 years due to the coronavirus lockdown, with travel on the nation’s roads plummeting to levels not seen since 1955, according to The Guardian – a time when there were more than seven times fewer licensed motor vehicles in the country, and three years before the country’s first section of motorway opened.

The government’s message for people to stay at home except for essential travel has resulted in trips made by car and van, as well as on foot or on bike, falling by around three-quarters compared to before the coronavirus outbreak.

Bus traffic, meanwhile, has fallen by 60 per cent, and that of heavy goods vehicles by 40 per cent, with many lorries still on the road to deliver supplies to shops and essential businesses as well as hospitals.

Graphs released at the government’s daily press conference show that the decline in traffic was accelerating well before Prime Minister Boris Johnson announced a fortnight ago that people should stay at home, other than for essential journeys. 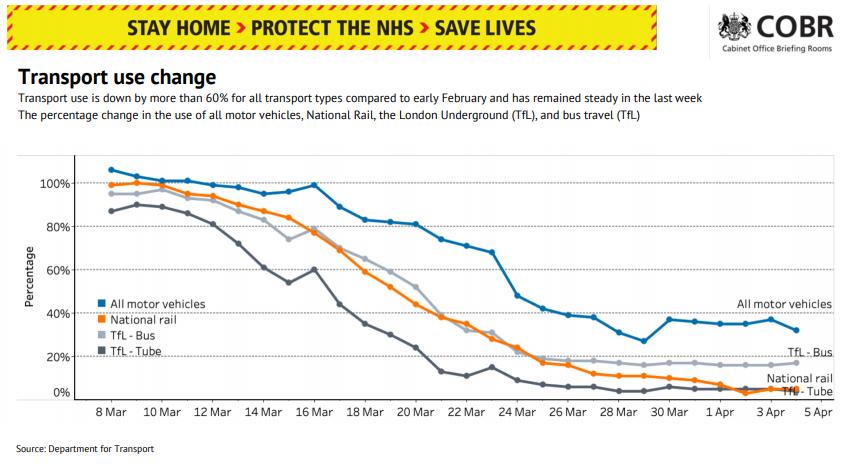 Public transport use has also fallen dramatically as many businesses began shifting towards a working-from-home model, even before the government said that only essential workers should continue to commute.

As of September last year, there were 38.9 million licensed motor vehicles in Great Britain – up from a little over 5 million in 1955, a more than sevenfold increase.

The Guardian reports that traffic data analysis firm Vivacity, which collates information from traffic cameras across England, saw car journeys begin to fall shortly after the government said on 12 March that its response to the pandemic was moving from the delay to contain phase.

Bus, van and lorry journeys began to fall later, after the Prime Minister’s announcement of the lockdown on 23 March, and there had been a rise in HGV traffic in the week preceding that.

The company’s CEO, Mark Nicholson, attributed that to supermarkets having to replenish stock due to panic buying.

“We interpret that as, because people were suddenly panic buying, they needed to do many more deliveries to shops across the country,” he said.

The company noted that journeys by cyclists were falling more slowly than those by pedestrians, partly because the latter were avoiding public transport, and also because some would have switched to cycling for their commutes.

The reduction in motor traffic is also leading to a fall in harmful emissions and an improvement in air quality in towns and cities, and Nicholson said that there could continue to be an ongoing benefit should the current restrictions result in more people continuing to work from home, at least part of the time, once the lockdown is lifted.

“If that manages to decrease traffic on the roads then that would be a great outcome from an environmental perspective,” he explained.

Last week, data from the National Centre for Atmospheric Science (link is external)(NCAS) showed big falls in levels of nitrogen dioxide (NO2) and particulate matter (PM2.5) in 10 UK cities.

NCAS director of science, Professor Ally Lewis, said: “If you look at traffic volumes, they're still going down. And so we probably haven't reached the bottom yet.

“A few days ago, we were talking about journeys by car going down by about a third, and now it's nearly a 50-60 per cent reduction.

“So, it's possible if transport keeps declining, the signal we detect could get even larger.”