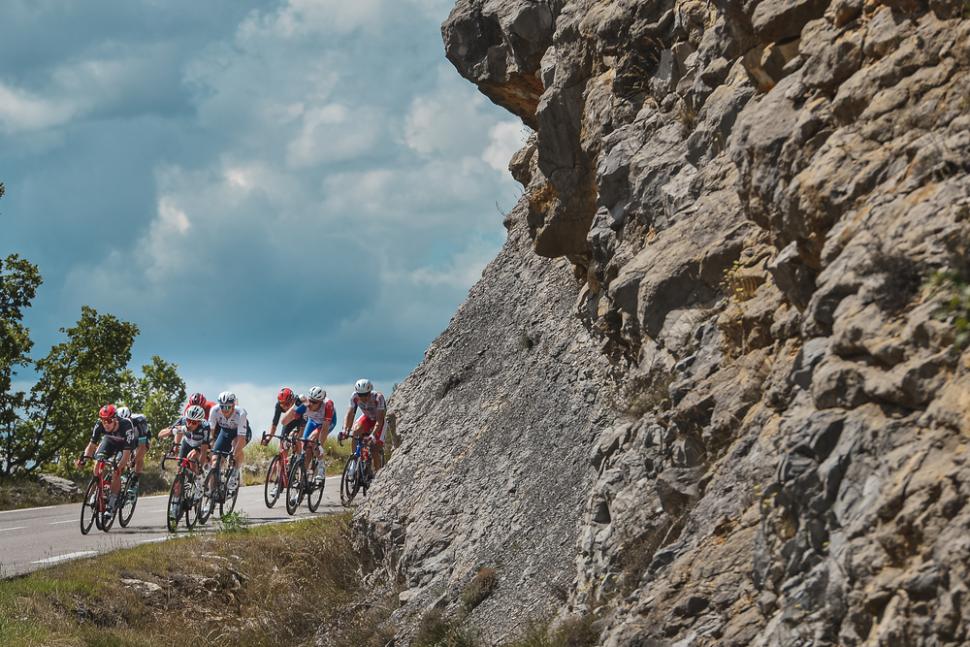 Nils Pollitt has won Stage 12 of the Tour de France from the break to take his first top-flight victory in Nimes this afternoon, on a day when his Bora-Hansgrohe team mate Peter Sagan abandoned the race. The German attacked his fellow escapees with 12km remaining to ride off to victory. Defending champion Tadej Pogacar of UAE Team Emirates retains the overall lead.

The peloton – including Mark Cavendish who would have been favourite to win a bunch sprint today to equal Eddy Merckx’s record of 34 wins – was happy to eventually let a break go.

The Deceuninck-Quick Step rider, in the green jersey but with standard team issue shorts rather than a skinsuit which gave a clue even before the stage began that he would not be targeting the sprint, eventually led the peloton across the line 16 minutes after the winner.

There had been frantic racing early on due to crosswinds, with echelons forming right from the start of the 159.4km stage from Saint-Paul-Trois-Chateaux.

With legs still suffering from yesterday’s double ascent of Mont Ventoux, the main bunch slowed the pace, the escapees eventually building a lead of around 15 minutes as the race headed through the spectacular scenery of the Ardeche Gorges.

It was Lotto-Soudal’s Harry Sweeny, making his debut in the race, who initiated the attack from 47km out that would form produce the quartet who would contest the win, the Australian followed by Pollitt, Imanol Erviti of Movistar and Stefan Küng of Groupama-FDJ.

The Lotto-Soudal would attack again to try and get clear, but eventually it would be Pollitt who would make the decisive move, the Australian finishing third with Erviti the second man across the line behind the winner.

Sagan’s failure to start the stage was due to knee pain, after he aggravated an injury picked up in the Stage 3 crash that led to Lotto-Soudal’s Caleb Ewan departing the race.

The three-time world champion said that the injury “seemed to be getting better and better but then I hit the knee against the handlebars again two days ago in the sprint and it’s swollen. I can’t bend my leg.”

It's unbelievable, it's a dream to win a stage in the Tour de France. Before the start it was decided that Peter would leave the race because of his knee problems, so that changed our tactics a bit.

Right after the start, we had crosswinds and quite a big break group was formed. I was already feeling better in the last few days, so I gave it my all today and it's unbelievable it ended with a stage victory in the Tour de France.

There were quite a few sprinters and fast guys in our group, so I knew I had to make the race hard and attack quite early.

I launched the first attack and we ended up with four riders in the front, the sports director told me it was my last chance before the finish, I had to give it a try and give everything.

I did it again, I attacked and I was seeing my gap growing to 20, then 30 seconds, and coming to the finish solo was unbelievable. Crossing the line I thought that all the effort, everything I have done, had paid off.

Cycling is my passion and I'm so often away from home, from my family with all the races and training camps, so winning a stage in the Tour de France is the biggest victory you can have.

The break was good for us. We had Julian [Alaphilippe] there, who is such a world class rider, and no contenders for the green jersey, so it was a nice scenario for us on a day with some heavy roads and big speed right from the start.

It’s another stage ticked off at the race and we will continue to take it day by day and stay focused.