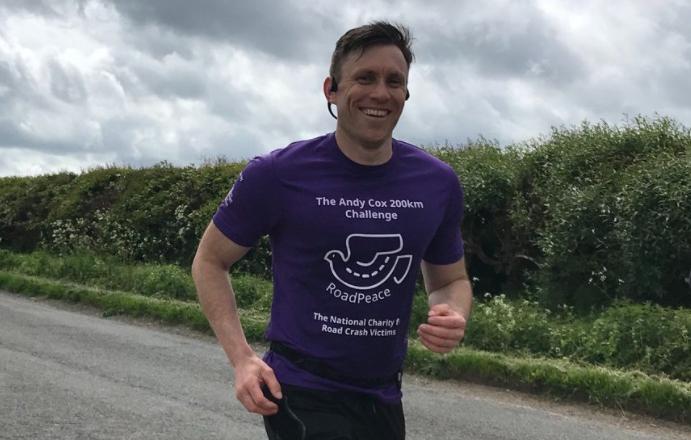 A senior police officer who won plaudits from cycling campaigners for highlighting on social media the dangers that vulnerable road users face has raised more than £43,000 for RoadPeace – the largest single fundraising effort ever undertaken for the national charity for road crash victims – after completing a 200-kilometre run.

Besides raising money for the charity, his run, from Crystal Palace in London, close to the site of the world’s first fatality involving a motor vehicle in 1896, to the National Memorial Arboretum in Staffordshire also aimed to highlight complacency towards road crashes, which kill five people on Britain’s roads every day.

The #AndyCox200km run concludes tomorrow but we must continue the road danger conversation and support @RoadPeace. This video is a call for action - parliamentarians, road safety leaders and the public at large, it's time. pic.twitter.com/KXNSqkPFSQ

DCS Cox, who was previously lead for Vision Zero at the Metropolitan Police, is calling for:

A review of the exceptional hardship defence, which enables defendants to continue driving after having more than twelve points on their licence

The right language being used media when reporting collisions - using the word ‘crash’ not ‘accident’.

He said: “Five people being killed and over 60 people seriously injured on the roads every day is not inevitable. Much more needs to be done to prevent the needless suffering caused by road danger.

“Whilst the challenge and UN Global Road Safety Week has put the issue in the spotlight, coordinated action is needed by government to tackle it.”

During his run, he was accompanied at times by family and friends of victims of road traffic collisions, as well as officers from other police forces and a motorcycle escort for the finish.

Very pleased somebody captured video footage of fellow runners and I entering the @Nat_Mem_Arb. Also very pleased to see the donations continue to flood in. Thank you!https://t.co/BG9NTHOrNj https://t.co/9WW6tJw3AC pic.twitter.com/iiBSyKrpu5

RoadPeace CEO Nick Simmons said: “The record-breaking sum that DCS Andy Cox has raised will help us to continue providing much needed support for crash victims and their families.

“We are immensely grateful to DCS Andy Cox for raising money for RoadPeace, but equally that he is bringing attention to issue of road danger.

“Road deaths have stayed at the same level since 2010 – at around 1,800 people killed in Britain every year – which equates to five people killed every day.”

He added: “The devastation caused by these crashes is preventable, and we are grateful that DCS Andy Cox is using his voice to call out society’s tolerance to road danger.”

Besides being featured extensively on national and local media, Cox’s run also received a message of support from the actress Vicky McClure – one of the stars of the recent hit BBC police drama, Line of Duty, where she played Detective Inspector Kate Fleming.

Wow what a message from DI Fleming of #LineofDuty, played by the amazing @Vicky_McClure. Such a boost on day 8 of the 9-day #AndyCox200km run raising money for @RoadPeace. £38k raised so far. Really hope to reach £50k target:- https://t.co/iNBUmd6jr6@martin_compston @dunbarnews pic.twitter.com/PJEDX27xww

In his previous role as a Met Superintendent, DCS Cox built up a solid reputation on Twitter for schooling those spouting anti-cyclist rhetoric on the platform, and also encouraged bike riders to use action cameras and pass on footage of poor driving to the police.

The tweet below is just one example of where in response to a poster who had asked why police did not appear to take action against cyclists who break the law, he highlighted that action was better directed at those road users that are more likely to cause harm to others, namely motorists.

What you say about threat from cycling is self evidently untrue. Supt Andy Cox who leads road danger reduction for the Met explains it well

We work with @WandsLS & @Wandscyclist for safe streets for people 🚶&🚲 because we understand the source of danger for both is motoring pic.twitter.com/sF4WAXlXl0