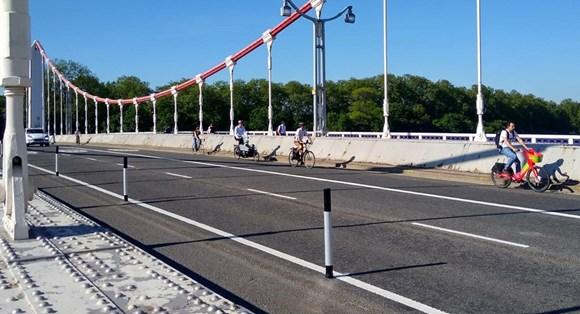 Responses will influence whether CS8 improvements between Chelsea Bridge and Wandsworth should be made permanent.
by Simon_MacMichael

Transport for London (TfL) is seeking feedback over recent trial changes made to cycleway CS8 between Chelsea Bridge and Wandsworth Town Centre – and says that the responses will help it determine whether they should be made permanent.

According to TfL, the route is among the top five per cent in the capital with the greatest potential for getting people cycling, and the changes, introduced from February this year, are already having an impact, with as many as 2,650 cyclists using it each day, up 30 per cent on the weekday average for 2014-19 despite a drop in all journeys in the capital due to the pandemic.

The trial changes include:

TfL says that the engagement process, full details of which can be found here, will remain open for six months, and is encouraging people to provide feedback on how the route has changed the area they live in and the way they get around.

Such feedback will then be used to decide whether any changes are needed to the trial schemes, and whether they should be made permanent. London’s Walking and Cycling Commissioner, Will Norman, said: “We are continuing to do all we can to support the increasing numbers of Londoners who are walking and cycling, and help prevent a damaging car-led recovery from the pandemic. Reducing road danger through upgrades, introducing 20mph speed limits and making changes to road layouts is central to this.

“I encourage everyone who lives, works or visits the areas within the CS8 trial changes to have their say to ensure that their feedback is taken on board going forward.”

Helen Cansick, head of Healthy Streets delivery at TfL, commented:  "We want to make walking and cycling easier and less intimidating on some of London's busier roads and we really value people’s opinions on how we can best achieve this.

“The trial changes to the CS8 route in Wandsworth aim to give people a new high-quality, safe cycling route, connecting neighbourhoods in the area to local high streets, Wandsworth Town Centre, central London and beyond.”

She added: “London’s growing network of high-quality Cycleways will play a vital role in ensuring a sustainable recovery from the pandemic and I’d encourage everyone who lives in, works in and travels through the area to get in touch with their feedback on these important trial changes.”

1
More bike parts supply chain problems loom as Shimano factory shut down temporarily
2
Tubolito unveils ‘unpuncturable’ inner tube with one year warranty against flats
3
Kickstarter campaign cancelled for kit available only to those who ride fast enough
4
WiggleCRC to be taken over by German online giant
5
Rider thrown off Baloise Belgium Tour for using illegal handlebars allowing him to rest his arms on them
6
Updated: Sheldon Brown’s website to continue despite bike shop where he worked closing down
7
Near Miss of the Day 595: Classic traffic island Must Get In Front driver then left-hooks cyclist
8
Heartbroken mother of 12-year-old killed during first cycle on road bike urges parents to supervise new riders