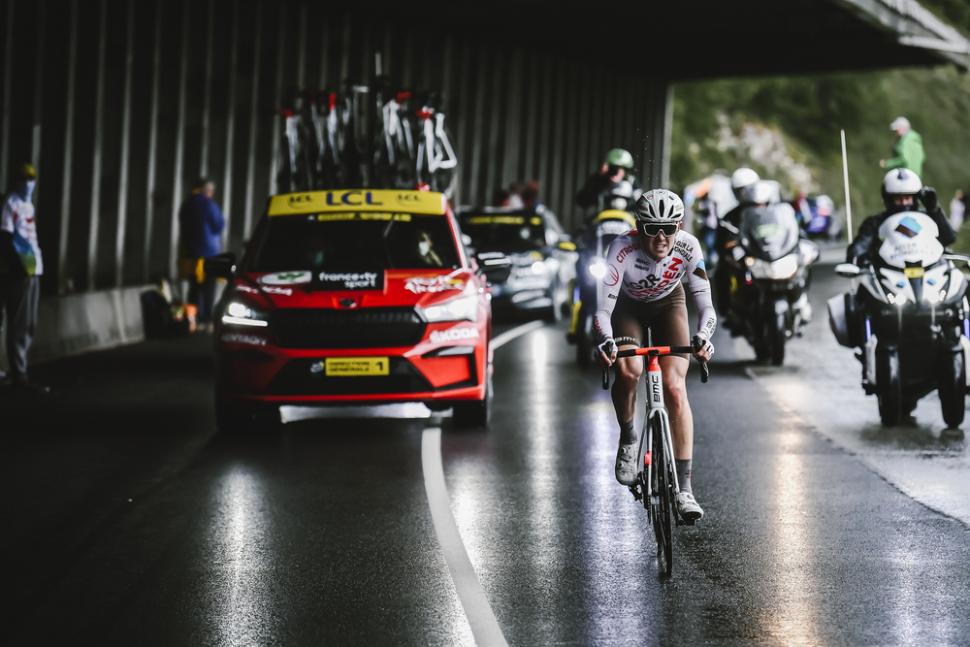 A thrilling opening week of the 108th edition of the Tour de France has ended with Ben O’Connor of AG2R-Citroën soloing to victory on the first mountaintop finish of this year’s race to emerge as the closest overall challenger to Tadej Pogacar of UAE Team Emirates, who retains the yellow jersey.

The 25-year-old Western Australian, a past stage winner at the Giro d’Italia, was 14th overall this morning, 8 minutes 13 seconds behind the Slovenian, who took the yellow jersey yesterday with an attack on the first day in the Alps to which none of his rivals could respond.

At times on another rainswept afternoon, O’Connor, who attacked fellow escapee Sergio Higuita of EF Education Nippo with 17km remaining – another Colombian, Nairo Quintana of Arkéa-Samsicm, who takes over the lead of the mountains classification, had been dropped by the pair shortly before the long final climb – was the virtual leader of the race.

With Pogacar launching an attack from the main contenders’ group towards the end of the stage, the Slovenian gained more time on all his rivals bar O'Connor, over whom he has a lead of 2 minutes 1 second ahead of tomorrow’s first rest day.

Deceuninck-Quick Step’s Mattia Cattaneo crossed the line second, 5 minutes 7 seconds behind O’Connor, with the Bahrain Victorious rider Sonny Cobrelli, who picked up maximum points at the day’s intermediate sprint, putting in a huge performance on a mountain stage to finish third and mount a serious challenge to Mark Cavendish for the green jersey.

Pogacar was sixth on the stage, 6 minutes 2 seconds behind O’Connor, with the next-best placed rider on GC now Rigoberto Uran of EF Education-Nippo, 5 minutes 18 seconds off the race lead.

For the second day running, Colbrelli got into an early move and took the maximum 20 points at the intermediate sprint, followed over the line by Team Bike Exchange’s Michael Matthews, who gained 17 points.

Matthews – winner of the green jersey in 2017 – now lies 38 points behind the Deceuninck-Quick Step rider, who has 168 points. Italian champion Colbrelli jumps to third, 9 points behind Matthews.

After tomorrow’s first rest day, racing resumes on Tuesday with a 190.7km stage from Albertville to Valence that should end in a bunch sprint, although there is the risk of echelons forming should there be crosswinds late on in the Loire Valley.

It’s worth noting too that the intermediate sprint on Tuesday comes at the top of a short, uncategorised climb – one that therefore will better suit puncheurs such as Matthews and Colbrelli, rather than Cavendish.

Two notable absentees from the start line of the 144.9km stage from Cluses this morning were last year's runner-up, Primoz Roglic, and Mathieu van der Poel, a worthy wearer of the yellow jersey for six days before Pogacar took it from him yesterday.

Jumbo Visma rider Roglic struggled in recent days after two crashes on Monday's Stage 3 to Pontivy, while van der Poel, who has made a huge impression on his debut in the race, will now prepare to challenge for Olympic gold at Tokyo next month in mountain biking.

Participating in the Tour de France was already a dream. Winning is a huge bonus. The race was completely crazy. There is a lot of joy now; I find it difficult to control my emotions.

I am so grateful to my AG2R-Citroën team which has trusted me this season. I hadn't really intended to go in the break, so I wasn’t certain what I should do in the breakaway.

I saw that we had 5 minutes early on, so we could gain time in the general classification. On a long day like this anything can happen. And in the end, I got the win. I gave it my all until the finish, it was a crazy stage.

Today the weather was really bad; it rained the whole stage and we got really cold. I’m glad it’s over and we have a rest day tomorrow.

I love racing in this weather. I’m more worried about the hotter stages that will come later in the Tour. That’s where I suffer the most and the other guys know that so I tried to make the most of these two days.

For a moment it looked like I might lose the jersey to O’Connor but I’m glad I didn’t – I really enjoy this jersey.

This was one of the stages I was terrified of and there was a lot of suffering today.

We got dropped on the first classified climb, but I had these amazing guys around me, who paced me and gave a lot of support.

I’m quite emotional I got over it and happy that I’m still in the race. I had Dries, Michael and Tim with me and I’m so grateful to them for what they did for me today and how hard they worked.