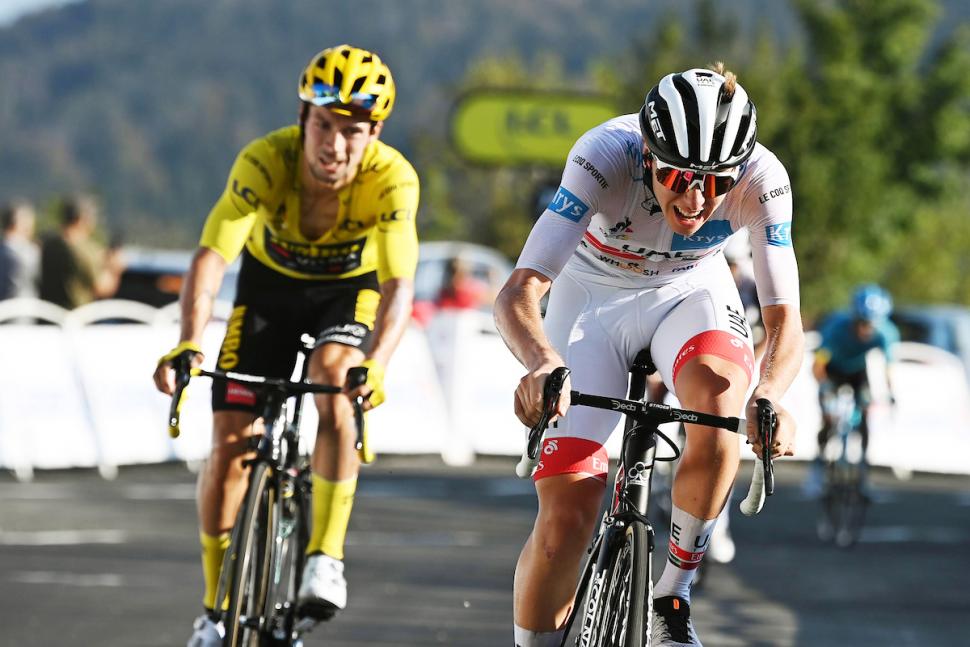 Primoz Roglic of Jumbo Visma finished second to fellow Slovenian Tadej Pogacar on the first ever Tour de France summit finish on the Grand Colombier in the Jura mountains, on a day when rival Nairo Quintana of Arkea-Samsic was distanced by over 4 minutes and defending champion Egan Bernal of Ineos Grenadiers lost more than 7 minutes.

Jumbo-Visma set a pace on the final climb that proved too high for many of their rivals to keep up with, and with 13 kilometres remaining, both Quintana and Bernal had been distanced with Wout Van Aert putting in a huge turn at the front of the group.

The Dutch team could still count on George Bennett, Tom Dumoulin and Sep Kuss to keep a high tempo even once Van Aert had pulled off, and reeled in an attack from Adam Yates of Mitchelton-Scott around 7 kilometres from the line.

The 174.5km stage from Lyon was split into two distinct parts – a fairly flat opening 98.5km followed by three tough climbs, the Montée de la Selle de Fromentel, the Col de la Biche and that first ever stage finish on the Colombier.

The racing was frantic from the start as riders tried to get into the break, which did not form until around half an hour had been raced – by which time an astonishing 28km had been covered.

In the eight-man break, the last members of which would be reeled in early on the final climb, was CCC’s Matteo Trentin, who was the first rider through the intermediate sprint point, which came after 58km had been raced.

He lies third in the green jersey competition on 189 points, while Sam Bennett of Deceuninck-Quick Step led the peloton across and extends his lead on Peter Sagan to 45 points, with 269 versus the Slovak rider’s 224.

By that point, EF Pro Cycling’s Colombian champion Sergio Higuita had been forced to abandon the race after crashing twice – the first apparently caused by a dangerous move by Bob Jungels of Deceuninck-Quick Step which will no doubt be scrutinised by the race jury.

The race started at great speed until the breakaway went, and we had Marco Marcato there to cover it.

Jumbo-Visma set a very high pace and maintained it throughout the stage, which along with the heat meant it was better not to attack. In the final, I waited for the sprint and took another beautiful victory.

Some of the GC guys were dropped and this was due the effect of the pace set by Jumbo-Visma.

Tomorrow we’ll have the rest day, then I’ll try to give my best again: at the moment, Roglic seems unbeatable, but anything can happen, anyone can have a bad day, as happened today to Bernal or as can happen to me or to Primoz.

I came just a little short to win. Pogacar was a bit faster. I would have liked to win to reward the guys for their work, but that didn't work out, unfortunately.

I compliment my teammates. They were very, very strong. Impressive even. The pace was really high. It was a tough, but all in all good day for us. So far everything is going according to plan, but we are not there yet.

It’s difficult to say how I felt, the feeling was that I was empty - I had no power. When the other riders did a big acceleration, I couldn’t go too hard to follow, but then I recovered really quickly, but my body couldn’t react as normal.

I’m the number one and I tried to give my best, but finally there were riders who were stronger than me.

Even if I start the last climb with the other GC riders I felt I would be dropped, I wanted to give my best, not just for me, but for the team and for the respect I have for the race.

There's no excuses, I tried to fuel my body in the best way possible, but I don’t know, I didn’t have the legs. The other riders have been stronger than me and we have to accept that.

Bob Jungels on the crash that ended Sergio Hiquita's race

We were fighting for the break, I was on the front, and at one point I wanted to pass the turn on to Sergio.

Without knowing, he was on my right, and other people told me he was looking back at that point, and there you go. Crashes like that are always unfortunate but that’s part of the sport.