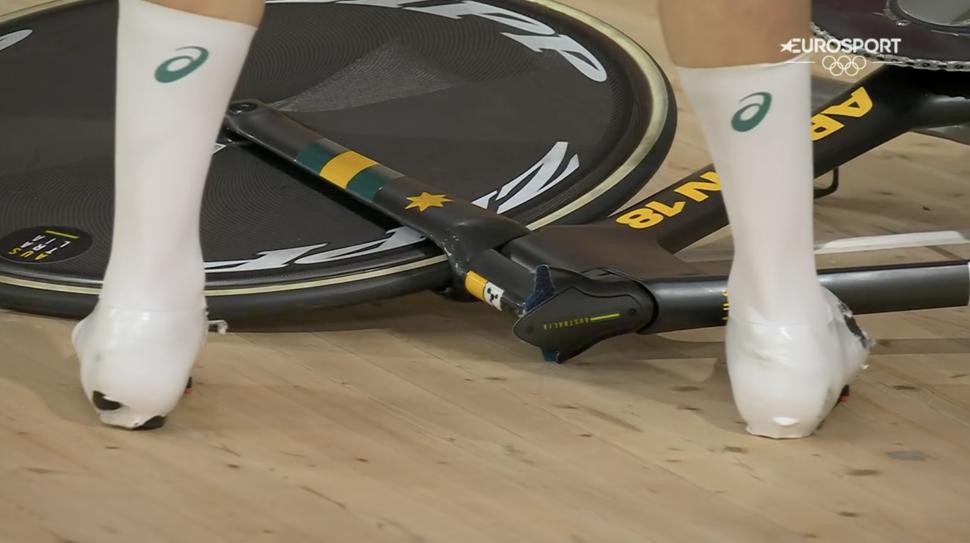 Updated: Snapped handlebar that caused Australian rider to crash in men’s team pursuit was made by Bastion Cycles, brand confirms

The crash at the Tokyo Olympics happened out of the blue, and now Argon 18 has clarified that it didn't provide the handlebar that failed catastrophically for Alex Porter...
by Liam Cahill

* Update 3rd August, 09:10am: the Australian national track cycling team's official bike partner Argon 18 issued a statement yesterday evening via social media to clarify the handlebar on Alex Porter's bike that snapped during the Tokyo Olympics team pursuit qualifying round was provided by another manufacturer. Hours later, Bastion Cycles confirmed it made the handlebar that failed. The full statements from Bastion Cycles and Argon 18 are directly below, and below that is our original article.

Regarding the handlebar failure during Olympic Competition.

Our team is working with the Australian Olympic Team to understand the cause behind the failure of one of our handlebar units during the four-person, Australian pursuit challenge at the Tokyo Olympics overnight.

Our first concern was for Alex Porter and the entire team. We are in constant contact with the Australian Olympic cycling team and coaches, and give our assurances that we are using all means available to investigate why this occurred.

Our focus at this time is to continue supporting the Australian cycling team for the remainder of the competition.

Like all of you, we were devastated to see the Australian rider crash in the men’s team pursuit. We are greatly relieved that no one was seriously injured and applaud the team’s quick return to the track to complete the race. A full equipment review is in progress by the Australian Cycling Team and we will have more details shortly, but at this time we can confirm it was not an Argon 18 handlebar which experienced this failure. While Argon 18 has designed a handlebar for the bike, and provided that bar to the team, it was not our bar in use during this incident. We unfortunately are unable to provide further detail on the manufacturer of the equipment nor why this particular bar was swapped out for the race.

We remain committed to our partnership with the team and wish them the best of luck as they continue to compete at the highest level.

The Australian men’s team pursuit quartet had to take to the start line again after what looked like a snapped stem sent Alex Porter smashing into the boards at 65kph.

Looking at the inside of the bar, it's amazing to see just how little material is used for parts that have to deal with such large forces.

While riding in man 4 position - at the back of the line - Alex Porter suffered a nasty crash when the front end of his Argon 18 track bike snapped clean through the middle.

There was no hope of keeping it upright and aside from the physical discomfort of the crash at around 65kph, there must surely be some second looks at the bikes from the riders using the same equipment. 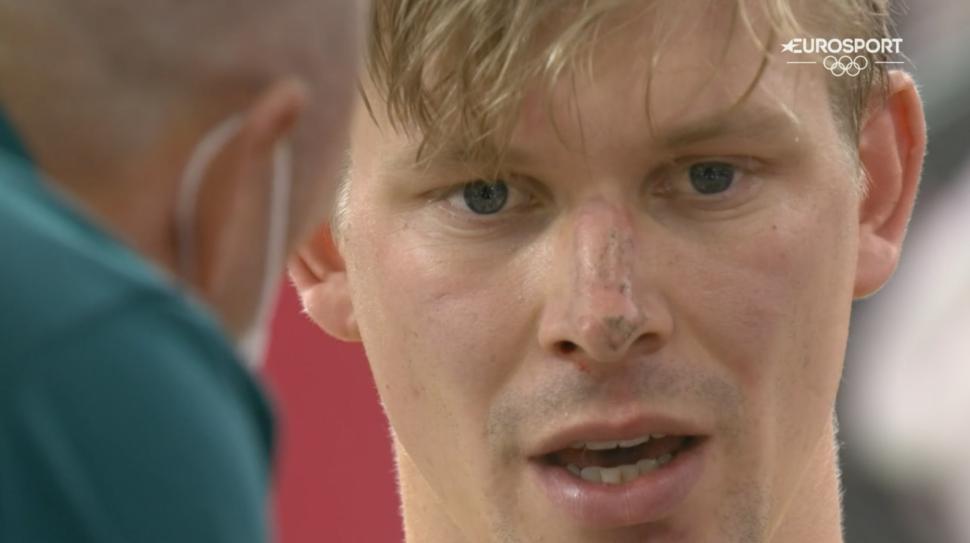 Porter was quickly back on his feet, but was visibly angry and, after removing his bike from the bottom of the track, began checking his injuries which appear to include road rash on his face.

Initially, we assumed that the fault was with the steerer tube. It is not uncommon for these to break, but usually, an impact from a pothole or over-tightening of the stem bolts will be the cause. Here, however, the stem looks to have broken at the point where the base bar meets the aero stem, and the cause of that is still unknown.

5 years of hard work just for your bars to fall off. Feeling for the @AUSOlympicTeam TP boys😢 Not sure what the rules are but hoping they get another chance🙏

Road sprinter Caleb Ewan summed up our immediate thoughts when the crash happened.

Ballsy call for the Aussies to stop riding, always wait until you hear the gun.

Hope they get a re-start but I don’t think it’s guaranteed? #Tokyo2020 pic.twitter.com/4eFcPyXGHG

Then thankfully Callum Skinner, the former Team Sprinter and an Olympic gold medal winner in London 2012, tweeted to confirm that rule 3.2.074, concerning ‘mishaps’, covers just this type of thing and the Aussies will get another go... and they did, remarkably including Porter who licked his wounds and rode again in the restart, before pulling out to see the remaining three riders on the team finish fifth in a time of 3:48.448.

Alex Porter's battle scars. What a courageous effort to race in the restart 👏#Tokyo2020 | #7Olympics pic.twitter.com/rLfXsLZMXE

Interestingly, there was a recall notice posted regarding the steerer module of the Electron-Pro 2020 track bike. That recall states that "a defect in the bike's steerer module may pose a fall hazard to users."

The model being ridden in Tokyo by the Team Pursuit riders is the Electron Pro TKO Pursuit frameset and features a very similar front end to the 2020 model, but there is no evidence the issue here is related to the recall.