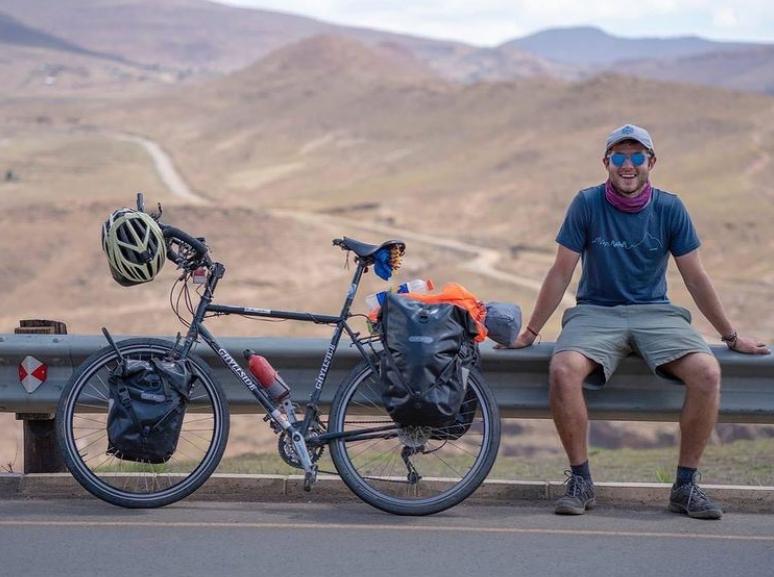 Round-the-world cyclist arrives in UK... and has bike stolen outside a Reading Wetherspoons two days later

Josiah Skeats says he cycled through many countries on his travels and was "always welcomed with hospitality", which unfortunately wasn't the case during his time back in the UK...
by Jack Sexty

A British adventure cyclist who says he spent 835 days cycling around the world "through countries people repeatedly warned were too dangerous to visit" has had his latest adventure brought to an abrupt end... outside a Reading branch of Wetherspoons, where his girlfriend's bike was stolen.

Josiah Skeats says he has covered over 40,000km by bike on his Instagram page, and was on only his second day of bike touring in England when he arrived in Reading on Tuesday.

According to the Reading Chronicle, Skeats was part way through cycling the new King Alfred’s Way route with his girlfriend, when the theft happened five metres away from where they were sitting outside the Hope Tap in Friar Street.

The 29-year-old and his partner were inside the branch of Wetherspoons drinking coffee with their bikes outside propped against the window, when the thief pounced. Skeats said that he gave chase for half a mile before giving up.

He told road.cc: "I was actually taking my girlfriend on her first bike tour around the UK ahead of a planned trip across South America this winter.

"I was excited because it was one of my first tours in the UK too. She had her bike stolen which has kind of dampened our confidence for that trip!"

On his Instagram account, Skeats added: "I spent 835 days cycling around the world through countries people repeatedly warned were too dangerous to visit - and I was always welcomed with hospitality.

"Today in Reading, on my second day bike touring in England, I had a bike grabbed and stolen less than 5 metres from me. The bike and everything attached to it, gone in a second.

"I’m sorry not to be sharing my usual positive, restore-your-faith-in-humanity message, but I guess bad things happen everywhere and not just in countries with a bad reputation. I’m absolutely devastated."

The stolen bike, a Scott Aspect in a size XS, is worth £1,000 and was taken with up to £250 worth of camping gear. Anyone with potential information about the theft is asked to contact Thames Valley Police by calling 101, or by making a report online quoting the reference number 43220213517.

It's certainly not the first time an adventure cyclist has been left with a bad impression of the UK compared to the hospitality they might have received in other countries. In 2017 another round-the-world cyclist Rob Lutter had his bike and all of his possessions stolen outside a Co-op in Kingston upon Thames, two years after he'd had his previous bike taken.

In 2019, Scottish mental health campaigner Josh Quigley's run of bad luck continued after being fined for cycling in Bedford when his bike was stolen in London, just as he was about to embark on a round-the-world adventure (Quigley's luck changed when he broke the 7 day cycling distance record in 2021).

In 2012, Sam Swain returned back to the UK from a 10,000 mile trip when his Dawes Super Galaxy tourer was stolen in Bristol.

At the time Swain said: "We were in places like Iran where people are really struggling and they were so much more united.

"I used that bike to go around the world and have had so many memories on it. You simply cannot get that back by buying another one."