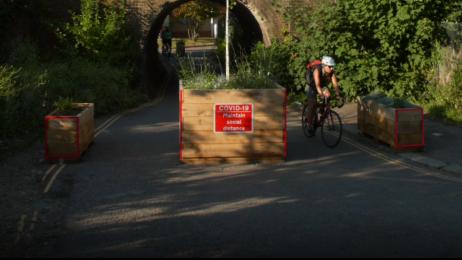 Police in west London have investigated a death threat made against councillors supporting low traffic neighbourhoods (LTNs) and cycle lanes in the borough of Hounslow, including Chiswick which has seen some of the most vocal opposition to interventions aimed at reducing traffic and promoting active travel. Officers have spoken to a local man about the threats, and consider the matter closed.

Local news website The Chiswick Calendar reports that the threat, made on community website Nextdoor.co.uk by a former unsuccessful candidate for a seat on Hounslow Council, was reported by both the council itself and by a local resident, who was told by police who visited that they took the incident very seriously.

The post was made by Simon Mabbutt, who had stood as a UKIP candidate in 2014 in Hounslow’s Chiswick Riverside ward, and who wrote: “The council members who agreed this most pathetic changes which has increased pollution, ruined businesses and KILLED PEOPLE RE EMERGENCY VEHICLES NEED SHOOTING. I AM HAPPY TO PULL THE TRIGGER. They are the biggest imbeciles ever.”

He added: “I think it’s time to find out who and where these imbeciles live.”

In response, one Marlene Johnson, who is director of a lettings agency in Chiswick and is also reportedly involved in the OneChiswick Facebook group which opposes emergency schemes designed to encourage active travel, is said to have pointed him towards the Hounslow Council website.

Speaking to The Chiswick Calendar, council leader Steve Curran said: “Ever since the murder of Jo Cox MP, we take this sort of threat very seriously. The Chief Executive has passed it to the police.”

Speaking to the Local Democracy Reporting Service, with her comments quoted on MyLondon, Councillor Katherine Dunne, cabinet member for communities, said: “Myself, Councillor Hanif Khan, Councillor Guy Lambert as well as the leader Steve Curran have all been coming under criticism because of the traffic changes, which is absolutely fine ... it is all part of democracy, but making threats is not fine.

“I doubt that person actually has a gun but it was very shocking certainly to see that and to see that is someone’s reaction rather than just wanting to raise it through proper channels.

“We’re not really scared people are going to do us some damage [but] it shakes you because you realise that they see you as a role, not as a person.”

She added that the chief cause of concern was not a post made by someone she described as a “keyboard warrior,” but rather that it might incite others to act upon it.

A Metropolitan Police spokesperson said: “On Wednesday, 4 November police were made aware of a threat made on social media involving a number of people.

“Officers contacted those involved and carried out enquires to establish who was responsible for posting the message.

“A 59-year-old man from Hounslow was spoken to by officers and subsequently apologised to the victims. No further action will be taken.”

Hounslow is controlled by Labour, but the eastern wards of the borough, north of the Thames in and around Chiswick, are represented by Conservative councillors who long opposed plans for Cycleway 9, now being installed on the High Road, initially with wands for segregation.

In recent months, as the council has undertaken emergency active travel interventions such as banning through traffic from streets including Turnham Green Terrace and Devonshire Road (ignored, it has to be said, by many motorists), rhetoric used by Tory councillors against such measures has become increasingly strident.

Former leader of the Conservative group on the council, Joanna Biddolph, who is still a councillor, accused it of turning Chiswick into “Belfast during the troubles” and maintained that LTNs had created a “ghetto,” while the current Tory leader in Hounslow, Councillor Gerald McGregor, likened them to the “Berlin Wall.”

Last week, the council leader survived a vote of no confidence brought by Councillor McGregor – unsurprisingly, given Labours 40-seat majority in Hounslow – and afterwards, Councillor Curran said: “I understand the frustration that the introduction of the Low Traffic Neighbourhood schemes and Cycleway 9 has caused some residents in Chiswick.

“The LTNs were introduced at the direct request of this Government to improve walking and cycling to avoid a car-led recovery and to improve air quality particularly for those most at risk, the young and the elderly.

“These measures are temporary and will be independently reviewed before a final decision is made as to whether they become permanent. If they are not doing what they set out to do, then they will cease or be changed. This was always the intention. As it says on the tin, these were introduced under Temporary Management Orders.

Regarding the vote of no confidence, he added: “This whole farce has been a distraction caused by the Tory Councillors playing politics at a time when they should have been concentrating on working with us to beat the pandemic. Our residents and businesses expect nothing less. This was shameful grandstanding on their behalf.”

It's not the first time that death threats have been issued against elected officials in London by people opposed to LTNs.

In September, we reported how Hackney councillor Jon Burke had received a handwritten note threatening him and his family, leading local MP Diane Abbott to say: “Threatening to kill a councillor because you can’t drive your car exactly where you want, when you want. Appalling”