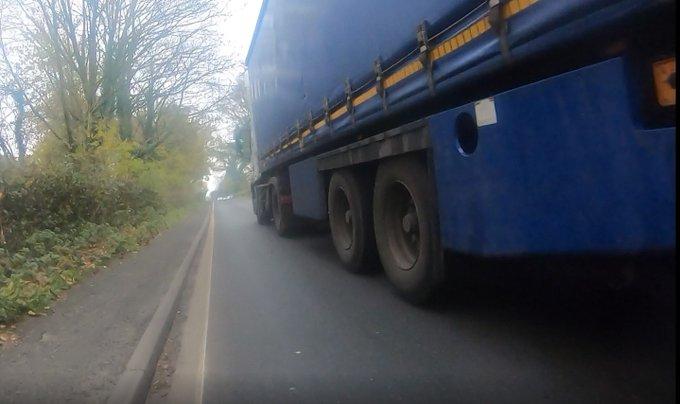 Police use close pass footage to highlight dangerous driving... but insisted "no offence was committed" when incident was reported

Cheshire Police have conceded that they didn’t take action on an incident that they themselves are using as an example of an unsafe pass of a cyclist. When this was pointed out to them by the cyclist who’d actually shot the footage, an officer explained that while the overtake provided an opportunity to highlight the kind of inconsiderate driving that cyclists are subjected to, “no offence was committed.”

Earlier today, Wilmslow Police tweeted the below image while linking to Highway Code rules on overtaking.

We are receiving more and more complaints from cyclists who are capturing images of drivers overtaking them in an unsafe manner. Here is an image of how NOT to overtake a cyclist. Please click on the link below explaining how to overtake safelyhttps://t.co/kjKmayc3JR pic.twitter.com/aoWFaLCWKY

This was spotted by Richard from Macclesfield, from whose video the image was taken.

When he'd submitted the footage to the force, he was told: "The footage you’ve supplied doesn’t meet the minimum threshold of an offence so unfortunately on this occasion no action will be taken against another party."

Just in case you would like to see the video... pic.twitter.com/3u7a1sr9Gp

Somewhat put out to see the incident being used in this way given the response he’d had, Richard replied: “Dear Police. That’s my photo. Your dashcam PC said no offence was committed so the driver didn’t even get a warning. Ironic that you are using it in your campaign.”

Another user asked Richard if the force was pretending it had taken action against an unsafe driver.

Wilmslow Police responded: “Sorry that you've miss read [sic] our tweet as at no point does it say or imply that we took action.

“As Richard said no offence was committed, it did however provided us with an opportunity to highlight some of the inconsiderate driving that cyclists have to put up with.”