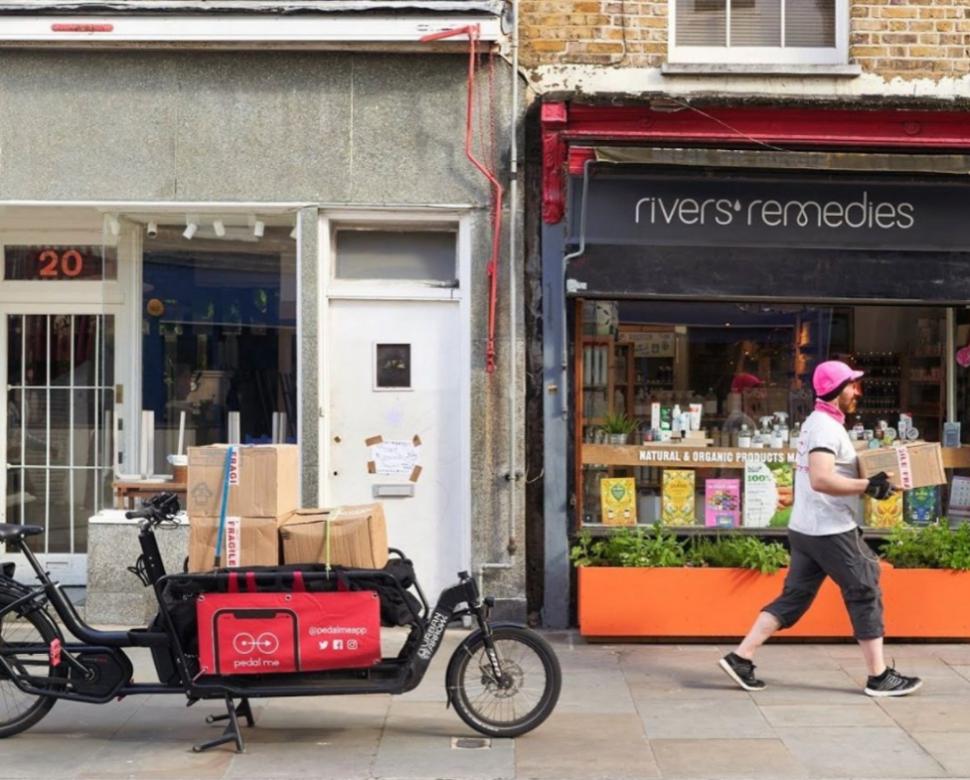 "Overall the vast majority of injuries to our riders occur off the bike - that's our focus for tackling danger"...
by Dan Alexander

E-cargo bike and pedicab company Pedal Me confirmed rumours it has banned staff riders from wearing helmets, citing safety reasons for the rule.

The news was first reported by Carlton Reid for Forbes after the firm posted a series of tweets on Friday explaining the decision.

The London-based cycling logistics provider said it believed riders and other road users take more risks when a helmet is worn, and that the "vast majority" of injuries sustained by staff occurred off the bike.

In response to a question posed by the owner of a bike shop, Pedal Me clarified the company's stance in a detailed Twitter thread.

"People taking risks that are sufficient that they feel they need to wear helmets are not welcome to work for us - because our vehicles are heavy and could cause harm, and because we carry small children on our bikes. Instead - we systematically work to reduce risk," it began.

"We do this by: 1) Thorough risk assessment. 2) Extremely high level of training, on an ongoing basis. 3) Near miss reporting - we track near misses, and minor injuries, and tackle the causative factors.

"We know that increasing helmet wearing rates makes cycling more dangerous per mile - although there are confounding factors here, this indicates that overall they do not provide a strong protective effect in the round - otherwise the opposite effect.

"Extensive reading of the literature suggests that this is because while helmets definitely help in the event of a crash, that risk compensation results in more collisions. So riders wearing helmets take greater risks, and those driving around them take greater risks too."

Pedal Me suggested a "major cause" of head injuries are crashes where the rider is thrown over the handlebars, something it says is "not possible" when using one of its three-metre long cargo bike.

The company also reported seeing worse behaviour from competitor firms that use helmets, saying the protective equipment seemed to make riders "much more likely to jump red lights and take risks in general".

Overall the vast majority of injuries to our riders occur off the bike, which we know because of our near miss and incident reporting - and that's our focus for tackling danger.

As @Chris_Boardman says: "Helmets not even in top 10 of things that keep cycling safe"

Pedal Me currently employs 70 staff riders, who together cover around 50,000 miles per month. The firm says it has not had any third-party or passenger injuries since it founded, although there have been minor collisions.

Bungee cords were the biggest cause of injuries, but have since been phased out. The most common source of injury comes "mainly off the bike", when loading and unloading the bikes, or when at a customer's premises.

Pedal Me also outlined its internal safety strategy, including training concepts "hammered home" and repeated passenger qualification every 18 months. Additionally, "near misses get reported and investigated, allowing us to systematically tackle real safety issues based on data rather than fear".

This reporting system is credited for "major changes" to training, bungees being phased out, upgraded brakes, and changes to the maintenance process, which is undertaken by in-house mechanics. All Pedal Me bikes and riders are also tracked through nameplates and GPS.

And finally, here are our incident logs.

We're particularly keen to help @metpoliceuk crack down on harrassment and assault on the street as this is something that is not common, but does happen and we don't think it's acceptable.

Since 2017, one rider reported suffering a concussion in a collision, which may have been mitigated by wearing a helmet, but Pedal Me stressed: "Potentially [a helmet may have helped]. But likely would have also increased risk taking and therefore increased the number of incidents overall."

Co-founder Ben Knowles told Forbes: "We once had an incident where a member of staff was assaulted with a machete, but that doesn’t mean we would equip all riders with stab vests."

The thread prompted much discussion, including questions of the legality of denying a rider work because they choose to wear a helmet.

Pedal Me responded to this concern, saying: "We've spent a lot of time thinking about this, and it's our legal responsibility to look after the safety of our staff, and the safety of those who might be impacted by our operations. We're legally obliged to put in rules that will keep our staff and third parties safe."