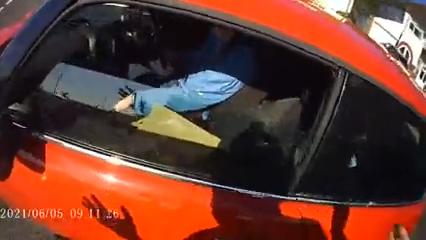 Near Miss of the Day 599: The "I'm a cyclist myself" edition

Our regular series featuring close passes from around the country - today it's Sussex...
by Simon_MacMichael

"I'm a cyclist myself" is something you'll often see on social media threads or newspaper columns before the person making that statement unleashes a rant against ... erm, cyclists ... but there is a special place reserved for a driver who utters those words at a cyclist on whom he has just made a close pass.

The rider on the receiving end in this case was road.cc reader James, who said: "This entry is from a couple of weeks ago: not a terrible pass - speed was OK at least - but I was surprised when the driver claimed that he was a cyclist and had assessed that the pass was safe, especially given the parked cars on both sides and my position somewhere between primary and secondary.

"The futility of passing when only 50 metres or so from a junction also didn't seem to play a part in his decision making.

"Reported to Sussex Police who have sent a letter," James added. "Maybe that is fair enough in this case?"