Near Miss of the Day 498: Close pass cyclist gets nothing out of close pass police

Our regular series featuring close passes from around the country - today it's Essex...
by Simon_MacMichael

A cyclist who filmed two close passes from Land Rover drivers in quick succession got short shrift from police - despite the force in question highlighting on social media its own efforts to target motorists who overtake cyclists without giving them sufficient space.

Mike, the road.cc reader who sent us the footage for our Near Miss of the Day series, told us: "I was cycling to work and two Land Rover drivers passed me with inches to spare, their wing mirrors were so close.

"As always with such close passes I try to keep a steady speed and direction hoping that there is not a gust of wind or a pothole that might put me under the drivers' wheels.

"At the end of the footage a driver of a Vauxhall pulled out on me, they did not even look and refused to even acknowledge my existence when I pulled alongside hoping for at least an apology.

"All three were reported to Essex Police under their Safer Essex Roads Extra Eyes campaign.

"All three were dealt with by 'no further action: insufficient evidence for a conviction'.

"I made inquiries of the Safe Essex Roads team on Twitter and their response was as follows: 'It has been decided that as the drivers have allowed as much space as possible and not caused you to brake or wobble from concern it does not meet the criteria'. 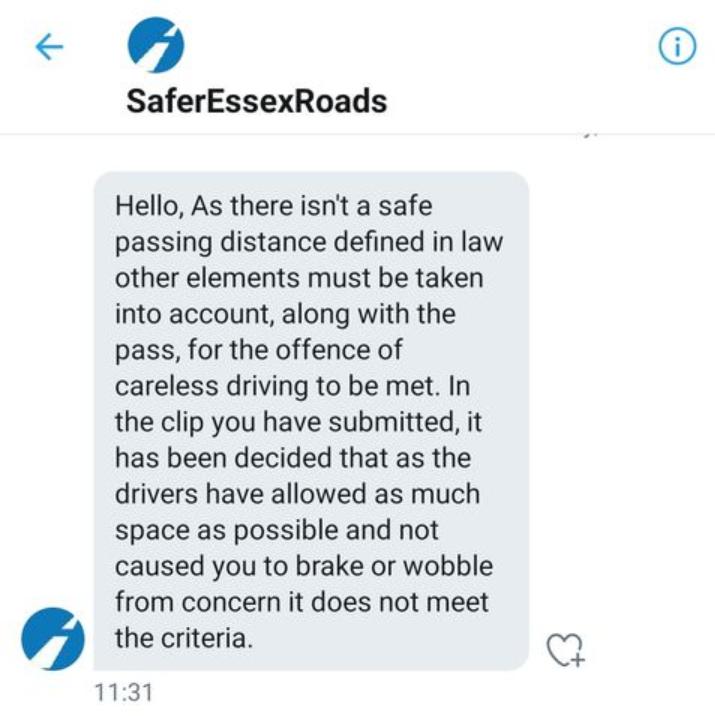 "I was dumbfounded that passing this close was deemed acceptable because I had not braked or wobbled, had I done either I might not be here today!

"Even more frustrating is that they have run close pass operations before and published safe passing guidance with pictures on their twitter account. Essex Police in my experience have a mixed performance when it comes to submissions, sometimes good and times like this very very bad leaving cyclists like me feeling incredibly disturbed and worried," he added.