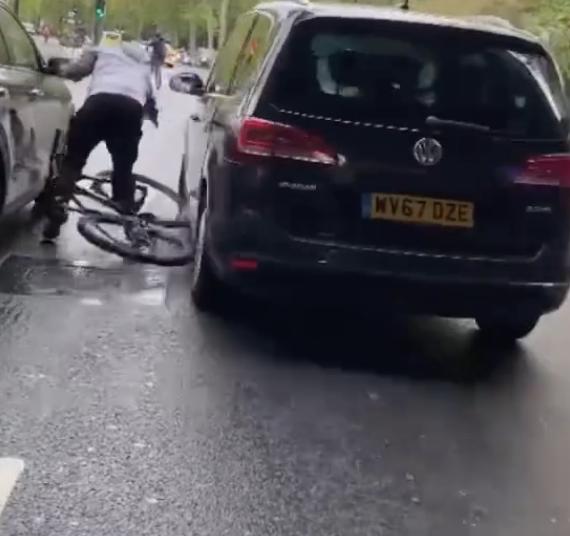 People were appalled by the incident and accused the motorist of 'using his vehicle as a weapon'...
by Will Bolton

A video appears to show a cyclist almost being deliberately run over by a driver after falling off his bike.

The rider is seen getting to his feet when the motorist seemingly tries to drive into him.

Luckily, the cyclist manages to get out of the way just in time but the driver then goes straight over his bike before speeding away.

The video was picked up by @Hackney Cyclist, who commented: "Just a London driver inches away from breaking a kids leg because he thinks he is playing GTA."

The rider who posted the video on Instagram gave some context to the incident when people who watched it asked him what had happened.

He said: "Other riders were pissing [the driver] off and I clicked his mirror and fell off so he ran me over [because] he was angry at the time."

Some people on Twitter commented asking for a video showing the full context to the incident suggesting the cyclist might have been riding dangerously, however as one user, Philip Williams said: "Whatever went beforehand is irrelevant.

"This driver deliberately turned towards the cyclist before straightening up using his vehicle as a weapon."

Yet another one. "There could be a very good reason why the driver in the SUV felt he needed to run over the young man on the bicycle." https://t.co/ibBtWZPzGV

A spokesperson for the Metropolitan Police said they were unable to provide any more details about the incident, but they are aware of it and are investigating.