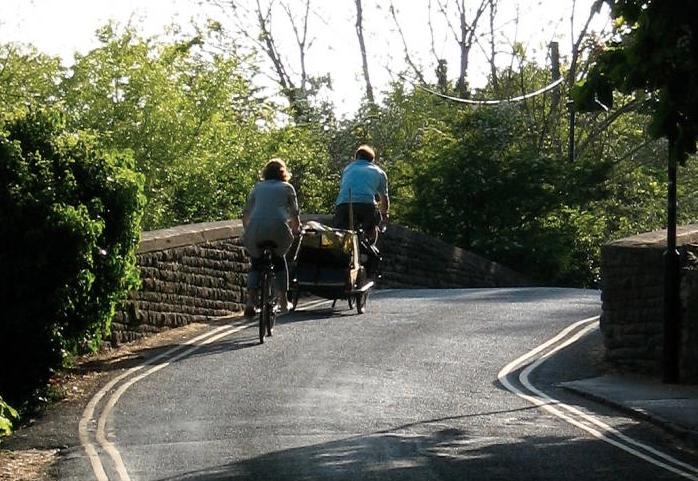 Study: Drivers give more space to cyclists with child seat or trailer

New research shows more than 10cm extra given to those perceived to be carrying child on bike, and fewer close passes
by Simon_MacMichael

A new study has found that motorists give more space to cyclists whom they believe are carrying a child on their bike.

Published in the November issue of the journal, Transportation Research, the study aimed to find out what effect a cyclist perceived to be carrying a child – whether on a child seat on a bike, or in a trailer – had on the behaviour of drivers when it came to overtaking.

The study, published under the title, The impact of a child bike seat and trailer on the objective overtaking behaviour of motorized vehicles passing cyclists, and which used mannequins rather than actual children, found that:

In morning peak the child bike seat is the safest in terms of overtaking distance.

More than a quarter of all overtaking manoeuvres was too close (<100cm).

Researchers analysed 19 journeys by bike on one road in the Brussels region of Belgium and encompassed variables such as what time of day it was, the availability of infrastructure, density of traffic and type of child seat or trailer used, found that the mean lateral overtaking distance with a child present was 128.8cm against 117.3cm without.

Dangerous manoeuvres – ones that gave clearance of 100cm or less – were much more prevalent where there was no child present, especially during the morning peak.

In conclusion, the study found: “Drivers of motorized vehicles do adapt their overtaking manoeuvre when they overtake cyclists transporting a child, keeping greater and therefore safer lateral clearance distances.

“In morning peak traffic hours and/or crowded circumstances the child bike seat can be considered as the safest way to transport a child in terms of lateral clearance distance. In general, with 25.3% overtaking manoeuvres under 100cm, police should monitor compliance with the traffic rules with regard to cyclists, and motorists should be more aware of the overtaking traffic rules.”

Authors of the study included Dr Ian Walker of the University of Bath, who in 2006 famously donned a wig as he researched whether drivers gave cyclists more space when overtaken them if the rider was (or, appeared to be) female, or was wearing a helmet.