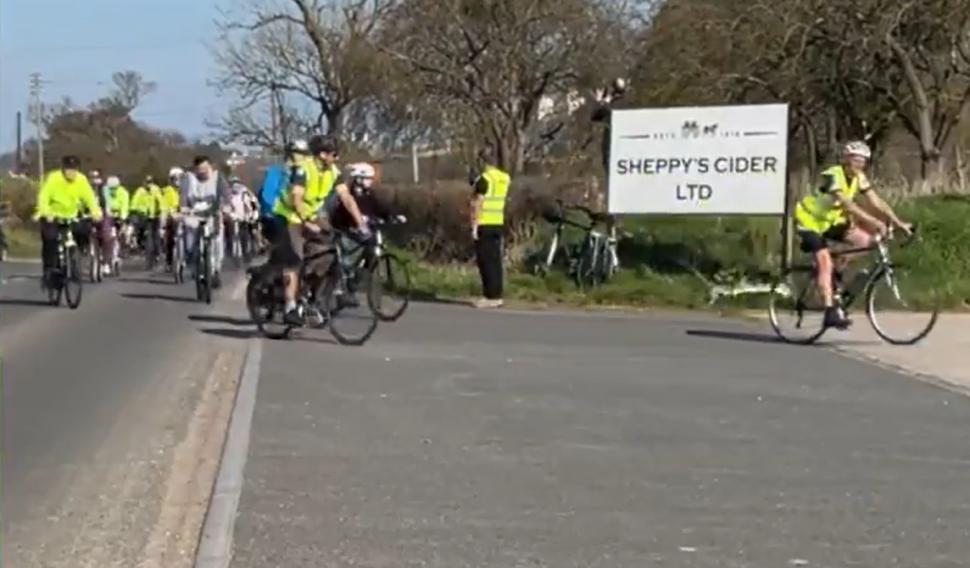 More than 250 cyclists took part in a protest ride along the A38 between Taunton and Wellington on Sunday, hoping to raise awareness of the need for a safe cycle route between the towns ahead of the upcoming Somerset Council elections in May.

A group of more than 120 starting in Wellington were joined by a smaller group from Taunton to form a mass protest peloton riding along the A38.

The ride was organised by Citizens Somerset and was accompanied by police and marshals who directed the group to Sheppy's Cider Farm at Three Bridges for a rally hosted by event organisers from Taunton Mavericks and the citizens' alliance.

Representatives from the four main political parties contesting the upcoming local elections were invited to attend and asked to sign Citizens Somerset's 'Safe Cycling Pledge' calling on candidates to "promote cycling as a means of sustainable transport across the county".

It also asks candidates to agree to "support substantial investment in Somerset’s cycling infrastructure so that our county becomes a leader in sustainable transport as well as tackling climate change" and "prioritise the Wellington to Taunton cycle route along the A38 as a first step, aiming to start construction by 2025".

There was a great turn out for the Great Big Safety Ride, supporting a Wellington to Taunton cycle path. In collaboration with @CitizensSomerset, staff, students and parents enjoyed a fabulous sunny ride ending at Sheppeys #excellence #outstandingrelationships #loveoflearning pic.twitter.com/BHx81SVVKU

Jonathan Cox, Citizens UK's deputy director said: "The A38 between the two towns does not have a cycle path, and is too dangerous for many cyclists to use, which is why the protest will take over the road with a mass peloton for a brief period on Sunday afternoon to make the point."

Speaking to Greatest Hits Radio at the event, co-organiser Chris Brossard explained: "What we're doing is bringing attention to the local politicians, particularly those taking part in the upcoming elections, to pledge to support the building of a proper cycle path between Taunton and Wellington.

"A proper wide one that is safe for children, safe for commuters."

Another attendee said: "I'm here today as a young father of two children. I've brought Florence here as she has recently learnt to ride her bike and I'd really like a safe cycle route for us to be able to use as a family."