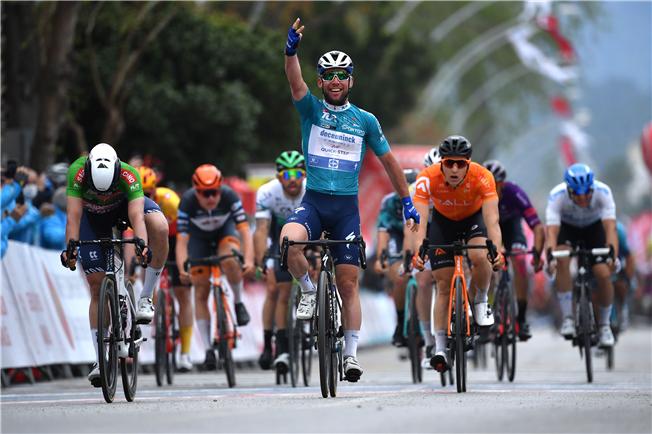 Mark Cavendish will race the Tour de France, which starts in Brest on Saturday, after he was named in Deceuninck-Quick Step's line-up for the 108th edition of the race, with Sam Bennett, winner of the points jersey last year, failing to recover from a knee injury.

Speculation over whether Cavendish, now 36, would ride the race first arose a fortnight ago when team boss Patrick Lefevere suggested that he could replace Bennett if the Irishman, winner of the points competition last year, did not recover in time.

However, on Friday he told Cyclingnews.com that Bennett “should be okay” to line up at the star in Brest and that he had told sports director Brian Holm to inform Cavendish that he would not be at the race.

Lefevere also said that there had never been any question of selecting both sprinters for the Tour, saying that Cavendish’s presence may have had an unsettling effect on Bennett’s confidence.

Joining the former world champion in the line-up announced today are the current wearer of the rainbow jersey, Julian Alaphilippe, plus Tour of Flanders winner Kasper Asgreen, Davide Ballerini, Mattia Cattaneo, Tim Declercq, Dries Devenyns and Michael Mørkøv, who will act as leadout man in the sprint stages.

“I am delighted to be going back to the Tour de France with Deceuninck-Quick-Step,” said Cavendish after his selection was confirmed.

“Obviously, the circumstances with Sam could be better – he had a special Tour last year and I am sad for him not being able to defend his green jersey.

“But at the same time, I am excited to be going back to a race that I have such an affinity with and where I have so much history.

“It is the biggest bike race in the world, and I am going to do all I can to grab this opportunity with both hands”, he added.

Bennett said he was “very disappointed” at missing the chance to defend the green jersey, but added that his injury meant that he would not be in the right physical condition to take part in the race.

“I had a very minor incident during training a couple of weeks ago, which affected my knee,” he said.

“While the injury I sustained is very short-term, it impacted my training for the biggest bike race in the world all too much and left me without enough time to be race fit.

“Le Tour deserves me at my best and it would do my team, and myself, an injustice to race in my current condition. I wish the whole Wolfpack [as the team is nicknamed] a successful three weeks on the road of France,” he added.

Cavendish is the most successful sprinter in the history of the race with 30 stage wins, the first coming in Chateauroux on the fifth stage of the 2008 edition. The town, where the Manxman won again in 2011, the year he won the green jersey, also hosts a stage finish this year.

His inclusion in the Deceuninck-Quick Step line-up will inevitably raise talk of whether he can beat Eddy Merckx’s all-time record, including time trials, of 34 stages.

After the 2016 Tour, when he won four stages, including on the opening day in Normandy to take the yellow jersey for the only time, there seemed every prospect of him eventually surpassing the Belgian’s total one day.

It later emerged that he had been struggling with the Epstein-Barr virus, and Team Dimension Data did not select him for the 2019 Tour, nor did Bahrain-McLaren last year.

This year, however, he has been rejuvenated after returning to Deceuninck-Quick Step in a one-season deal only finalised in December.

In April, he won four stages at the Presidential Cycling Tour of Turkey, where his Stage 2 win was his first success in more than three years, and earlier this month took the final stage of the Baloise Belgium Tour, his fifth win of the season, against a number of riders who will be his sprint rivals at the Tour de France.

He may not pass Merckx’s total over the next four weeks, but with eight flat stages on the parcours this year, there’s every chance he will nudge closer to it.

Deceuninck-Quick Step sports director said of Cavendish’s selection: “It’s great to have someone with his history and experience on the team.

“He will have a superb lead-out with Ballerini and Mørkøv, and the plan is to take it day by day and see how things go.”