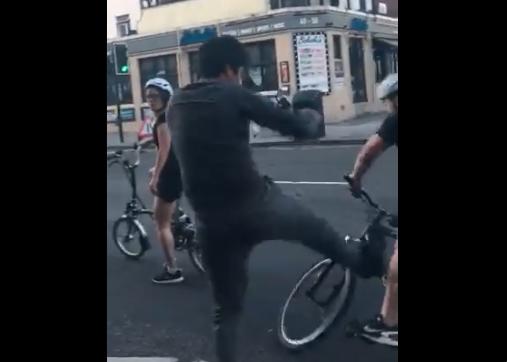 A man has been arrested on suspicion of assault following an incident on Camden High Street in North London earlier this week in which a motorist was shown trying to kick a cyclist from his bike.

News of the arrest was confirmed on Twitter on Saturday by Metropolitan Police Detective Superintendent Andy Cox.

A male has been arrested on suspicion of assault in respect to the below incident. Updates will follow.#Cycling #RoadSafety #London https://t.co/Q4BT9Erxyu

The incident, which happened opposite the junction with Plender Street, was caught on film, with video posted to Twitter last Tuesday evening.

In the footage, a cyclist can be heard saying to a man, “You nearly ran her over, are you going to apologise?”

The man then seemed to try and kick the cyclist off his bike, before returning to a BMW car which had been left in the road with hazard lights on, and drove off at speed.

After the video had been drawn to his attention, Det Supt Cox, who is the Met’s lead officer on Vision Zero, urged the person who had uploaded it to report the incident.

He added that if the incident had already been reported, the poster should email the crime and incident reference numbers “and my team will make sure the matter is promptly looked into.”

Please note that we are unable to accept comments on this post.