London Cycling Campaign (LCC) says that following an investigation, it has concluded that a series of tweets sent by one of its employees two years ago – before he began working for the charity – “were indeed racist,” but has stopped short of sacking Simon Still, the member of staff concerned.

Screenshots of them were shared on Twitter last week, and on Thursday they were highlighted by TalkRadio host Cristo Foufas – a vocal opponent of cycling infrastructure – on his late night chat show, with the story also picked up by The Telegraph at the weekend. 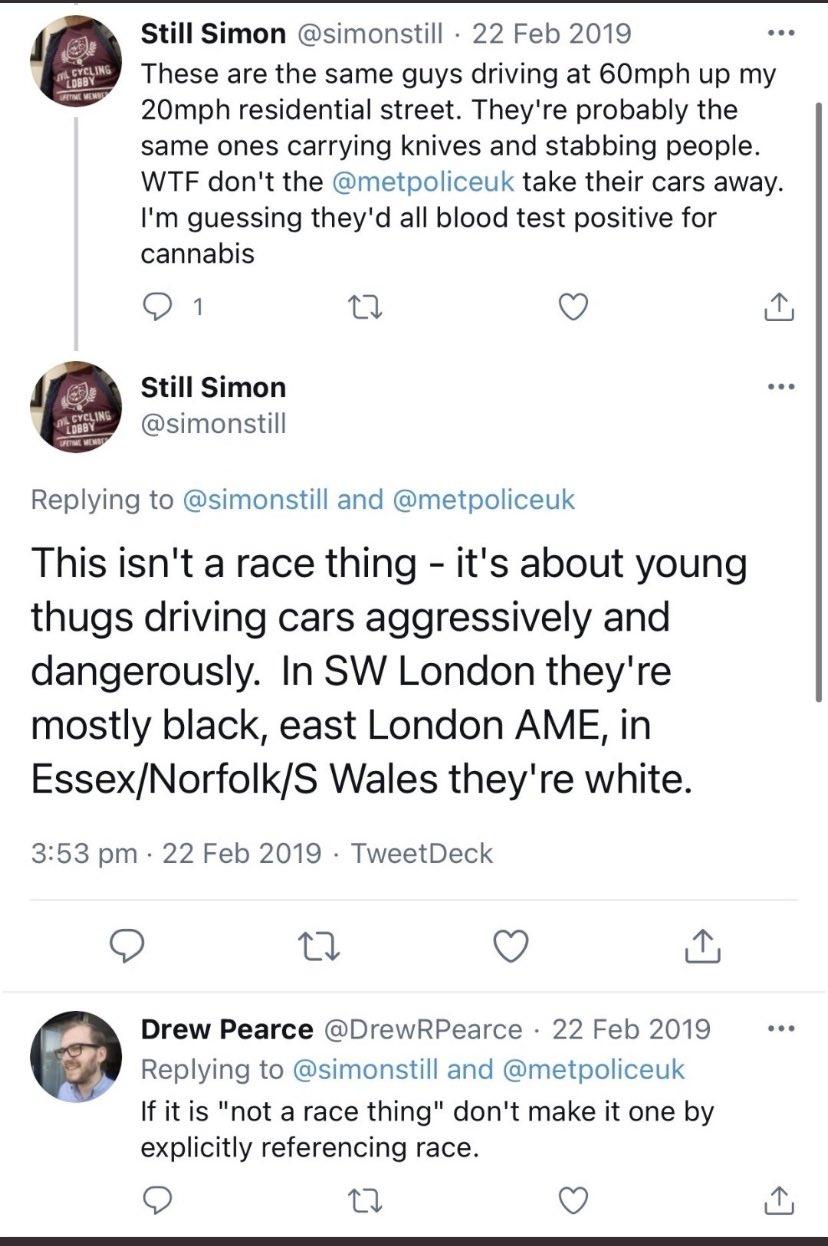 In a statement issued yesterday afternoon LCC confirmed that it had “recently received a number of complaints alleging racist tweets by a member of the LCC staff team, Mr Simon Still, posted prior to his employment with the charity. LCC takes such complaints extremely seriously and suspended Mr Still, prior to an urgent investigation.

“The investigation has been completed, and has concluded that the tweets were indeed racist. LCC believes there can be no excuse for such racist statements, condemns them and deeply regrets the offence that these tweets have caused.

“Mr Still did not contest that the tweets were racist. He has apologised unreservedly for the offence this has caused, especially to BAME people, and to the charity for breaching the charity’s values and policies in this way.

“The charity is satisfied that these tweets, which were posted as a short sequence, constitute an isolated occurrence, and has accepted Mr Still's apology,” LCC added. “Mr Still has been removed from external facing duties for an indefinite period and will undergo racism awareness training as a condition of his continued employment.

In a statement, Still said: “I apologise wholeheartedly and unreservedly for the racist tweets that I made in 2019.

“I hope people will accept it when I say that I have never made such unacceptable statements before or since. I’m deeply sorry for, and ashamed of them.

“I recognise that I’ve got a long way to go, as do many of us on issues of race and other equalities issues.

“I undertake to increase my awareness of and sensitivity around these issues and to be actively anti-racist in all I do going forward,” he added.

In response to Still’s statement, LCC CEO Dr Ashok Sinha said: “This whole episode has reminded us that racism in our society runs deeper than we sometimes care to think.

“The board of trustees and I believe the best way forward is not to cast people aside but to own the problem, and take responsibility for working with those people to make amends and reduce future harm.

“This is a hard path, and we know not everyone will agree with us. But we believe it is the right path to take, and is the one we are taking with Mr Still.

“We will also now work harder to ensure all LCC staff and activists are better equipped to understand and prevent racism,” he added. “And we will redouble our efforts to make our charity as diverse as the city we love, working with BAME groups and others to help us achieve that goal.”

Most of the replies to a thread on Twitter in which LCC summarised the outcome of its investigation were highly critical of the organisation. One tweet from a member received a reply from another user of the social network, who said that racist views are not something that can simply be turned on or off, as the person expressing them pleases.

2. The staff member did not contest the findings of the hearing and apologises, without reservation, accepting that this behaviour was offensive and in violation of LCC's equalities and inclusion policies.

4. Moving forward, LCC is instituting a robust review process which will ensure we are actively anti-racist. We will publish details on how this will be done. Our full statement is available on our website: https://t.co/CxKuydCqJ9

One does not pick and choose when one is racist. One holds racist views and it will affect their conduct and attitude. On occasion they will display overt behaviour and other times they will cause others to suspect it.

One does not simply switch off or pick when they ARE racist.

Another Twitter user said, however, that since the tweets pre-dated Still’s employment by LCC, he should not be punished for them.

Ridiculous.
If they did something before employment they shouldn’t be penalised in employment