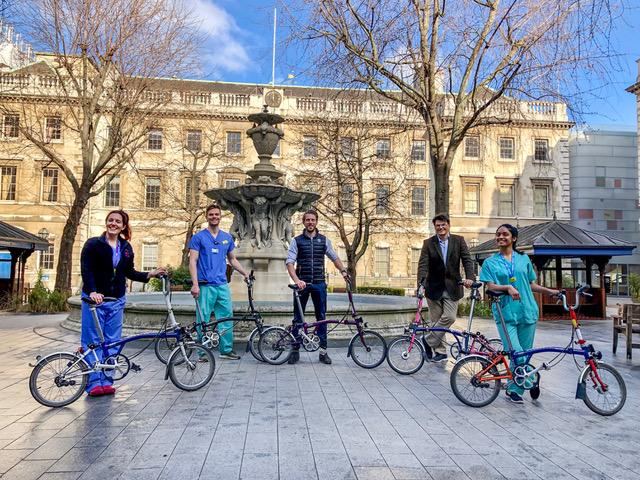 ‘Without action, we risk the car becoming the default mode of socially-distanced transport’
by Alex Bowden

UK hospitals are asking councils to ensure their staff and the populations they serve can get to work safely in the coming months through prioritisation of space for active travel. The Key Workers Need Streetspace campaign has been established in response to the easing of lockdown and the ongoing need to avoid public transport.

New government guidance for local authorities demands that more space be provided for walking and cycling in response to the coronavirus outbreak.

Pop-up cycle lanes are being constructed in many towns and cities and there are plans for a car-free zone in central London.

However, with an 85 per cent drop in public transport capacity expected in some areas, the surge in demand for walking and cycling may well come alongside a large rise in car use.

The Key Workers Need Streetspace campaign is therefore calling on councils to prioritise street-space for active travel, arguing, “it is the best course of action to improve the health of local communities and to ensure that staff can continue to use the healthiest and cleanest modes of travel – walking and cycling.”

Three of the biggest NHS trusts in London – Barts Health; St George’s and Barking; and Havering and Redbridge – have already backed the campaign, writing to local authorities urging them to act quickly on creating space for active travel.

Professor Charles Knight, the chief executive of St Bartholomew’s Hospital, said: “The evidence from Wuhan after lockdown is of an almost a doubling of private car use.

“Without action in the UK, we risk the car becoming the default mode of socially-distanced transport and non-car owners (over half of the UK population) may have to choose between expensive private hire vehicles, crowded public transport or braving the newly-trafficked streets.

“Our hospital staff are increasingly switching to walking and cycling to work in response to the pandemic.

“We need to make active travel a real option for everyone, not just the young and fit, and use cars and public transport only for those who have no other option.”

There have also been calls for a temporary ban on HGVs in town and city centres as this would 'completely remove a level of danger from cyclists', reports the London Evening Standard.

Jill Greenfield, the head of catastrophic injury at Fieldfisher law firm, said: “It would be great if the Government said that HGVs could not go through the centre of towns, which I think they have done in Paris and other cities.

"That would, in one blow, completely remove a level of danger from cyclists. If I could get a route into the city where I didn’t have to come into contact with traffic I would feel so much happier about getting my bike out.”