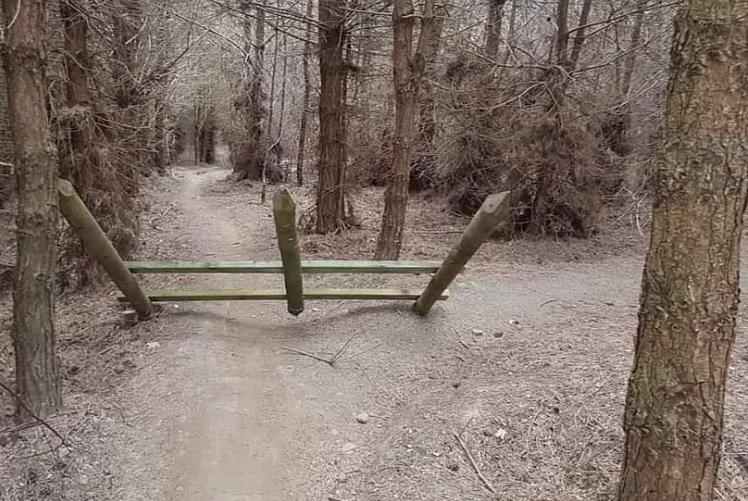 Police have confirmed that an horrific “medieval” style trap placed on a popular mountain biking trail near Newcastle-upon-Tyne has been removed, with social media users expressing concern that someone could have been seriously injured or even killed by the obstacle.

The picture of the trap, placed on the Powerline Trail at Chopwell Wood, appears to have been taken over the weekend by Facebook user Mick Stephenson who said in a post on the social network: “No matter what your views on MTB trails are.

“This is an inexcusable and barbaric way to express it . Some people need some serious therapy.”

He added that the sight of the trap had left him “speechless.”

No matter what your views on mtb trails are. This is an inexcuseable and barbaric way to express it . Some people need...

Comprising sharpened wooden stakes angled towards an oncoming rider, the trap bears a strong resemblance to ‘Archer’s stakes’ reputed to have first been used as a defence against cavalry by Turkish archers at the Battle of Nicopolis in 1396, where a Crusader army was routed.

Similar defences were deployed by Henry V when his longbowmen helped secure a stunning victory at Agincourt in 1415, with the French knights unable to penetrate the rows of sharpened stakes protecting the archers.

One person commenting on the Facebook thread about the trap at Chopwell Wood said: “A few years back there was fishing line and wire pulled across the track at neck and torso height.

“Thankfully we walked the route as we had heard reports. Utterly disgusting behaviour I hope the police are made aware.”

Northumbria Police confirmed to road.cc that they had been notified of the trap yesterday and that the barrier has since been removed, with no injuries caused.

A Force spokesperson said: “It is completely unacceptable to deliberately obstruct a biking trail as it could cause serious harm to riders.

“We would ask any suspicious behaviour is reported to us using the Tell us Something page on our website.”

A spokesperson for Forestry England, who manage Chopwell Wood, said: “We strongly condemn the actions of anyone who deliberately puts the safety of any forest user at risk.

“The obstacle was reported to us, and by the time our staff had arrived on site it appeared to have been removed, we are undertaking a wider check of the area for any other related issues over the coming days. We have reported the incident to the local police.”

We’ve reported on a number of traps set on mountain bike trails and cycle paths over the years, and such incidents appear to have been on the rise since the initial national lockdown that came into force a little over a year ago.

Just last month, we reported how the charity that manages the Malvern Hills was “gravely concerned” after barbed wire was discovered strung across trails at the Worcestershire beauty spot.

And in Edinburgh, a cyclist was seriously injured last month when he fell off his bike after crashing into barbed wire stretched across a popular cycle route in the Scottish capital.