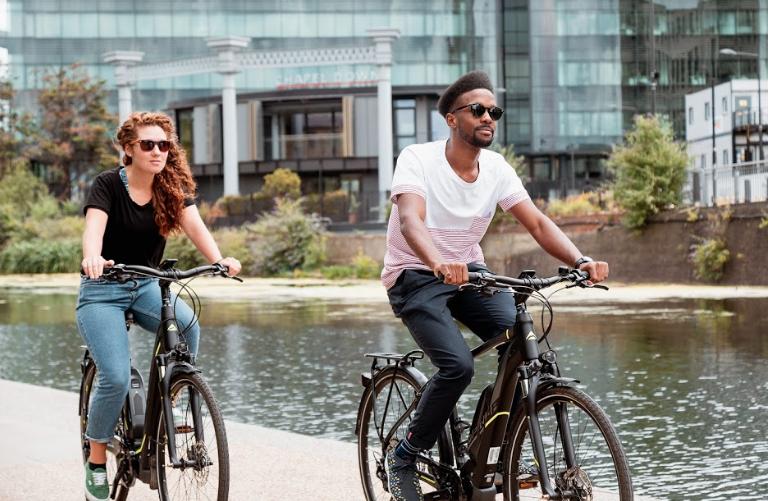 e-bike riding in city - via shimano.PNG

The Norwegian study found e-bike customers more than doubled their use of the bicycle for transport, and cycled an average of 9.2km a day compared to 2.1km before buying an e-bike
by Jack Sexty

In a further debunking of the idea that e-bikes are 'cheating', a new longitudinal study has found that e-bike riders undoubtedly cycle more and drive less. The researchers found that amongst participants who had purchased an e-bike, total journeys made by bike compared to other modes of transport went up from 17% to 49%, and their average cycling distance per day more than quadrupled.

The study from Aslak Fyhri and Hanne Beate Sundfør, titled 'Do people who buy e-bikes cycle more?', analysed cycling data from respondents who had bought an e-bike, compared to another group who were interested in buying an e-bike, and another control group recruited through the Falck National Register of Bicycle Owners - all participants lived in or near the Norwegian capital of Oslo.

The researchers said that previously, some trials into e-bike usage were often short-term, and participants rented bikes over a test period. Others were retrospective and involved participants reporting on their activity levels, or just compared e-bikers with regular bike users at one point in time (like the research covered on our sister site eBikeTips). The data from this study was collected over six months, to see if the good habits stuck amongst those who had took the plunge and bought themselves an e-bike.

it turned out that positive results of previous trials were replicated over a longer period of time emphatically, with e-bike owners increasing their bicycle use from 2.1 kilometres to 9.2 kilometres a day on average over the time period. There was also a big change in how many trips were taken by bike compared to other modes of transport such as driving, walking or public transport, with the e-bike owner group taking 49% of all journeys by e-bike compared to 17% before their purchase.

In comparison, the group who were interested in buying an e-bike but still used a regular pedal cycle shown very little change in cycling over the same period: "The results show that the large change in cycling we previously found of a trial scheme with e-bikes is replicated with actual customers. The change in cycling share is somewhat larger than it was for the short-term users, showing that mode change from e-bikes is not just a novelty effect", said the researchers.

In conclusion, the study recommends that e-bikes are increasingly becoming "an essential part of the urban transport system", and appear more likely to shift people away from using motor vehicles than non-powered cycles.

The researchers add: "Our results confirm previous studies, but provides more controlled data about mode change from e-bikes than previously has been shown. People who buy an e-bike have more than a twofold increase in their use of bicycle for daily travel."