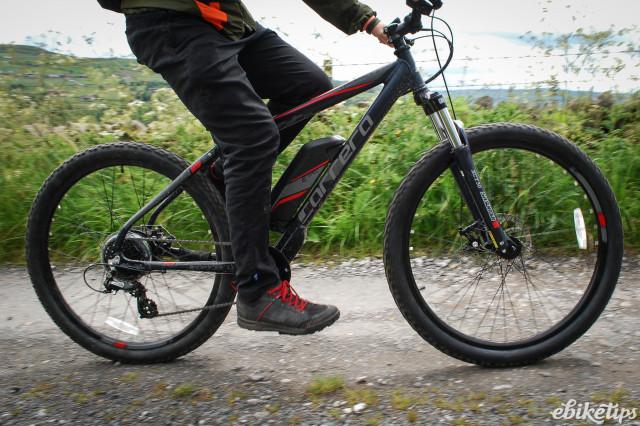 “My experience of an e-bike showed me how they make cycling accessible to many more people than regular cycles,” says Southampton Itchen MP Royston Smith
by Simon_MacMichael

A Tory MP who earlier this year complained that a pop-up cycle lane installed by Southampton City Council had led to increased congestion and air pollution has had something of an epiphany after Halfords lent him an e-bike to get around his constituency.

Writing on the website Conservative Home, Royston Smith, who has been MP for Southampton Itchen since the 2015 general election and a former councillor in the south coast city, asked whether the COVID-19 crisis will “really bring an end to our reliance on cars for many of us?”

The short answer he gives is “Probably not” – before going on to say that “If we are to see the green transport revolution that the Prime Minister has announced, the case must be made for more accessible sustainable transport options, such as e-bikes.”

In June, when he criticised the city council over an emergency cycle lane installed on the A3024 Bitterne Road West, Smith – who owned local bike shop Triangle Cycles from 1993 to 2003 – said: “We need to encourage people to use cleaner, greener transport, for example electric vehicles where possible.”

He suggested that in a hilly city such as Southampton, people should be encouraged to use e-bikes and e-scooters (once legal) for their commutes – and having now tried out the former, he was pleasantly surprised by the experience.

“Last month, my local Halfords store in Southampton lent me an e-bike to trial for a few weeks,” he wrote in his Conservative Home article. “When Simon, the branch manager, set me up on the impressive Carrera Vengeance, I had my doubts. His advice was straightforward – ‘just ride’. I expected I would need to do something with the throttle to boost the motor. Instead, it really was that easy, the constant feeling of riding in the lowest gear, unless I chose to add some resistance.

“The effect of this was to make even the mightiest hills feel flat; very welcome in a hilly city like Southampton. It really couldn’t have been easier, and made cycling a viable option for me in a way it probably wouldn’t be for most slightly overweight men in their mid-fifties who have fallen out of the habit of cycling regularly.

“I was also impressed that e-bikes maintain their charge for so long. Halfords showed me that on average charging is required every 30-50 miles, making e-bikes a practical alternative to using the car and public transport for many. E-bikes are included in the Cycle to Work scheme, which allows employees to spread the cost of a new purchase through tax free salary instalments over 12 or 18 months making getting one a more affordable prospect than ever.”

Smith rejected accusations from local campaigners that he was “anti-cyclist” due to his opposition to the emergency infrastructure, and indeed repeated his assertion that the initial £11.5 million that the Labour-run council had received from the Department for Transport for it had not been spent wisely, “Because creating cycle lanes does not make cycling more accessible to all,” and in his opinion led to more congestion and air pollution.

But he added: “My experience of an e-bike showed me how they make cycling accessible to many more people than regular cycles. Halfords reported a tripling of sales of electric bikes this year. With the technology being cheaper and better than before, a quiet e-bike revolution is already taking place. E-bikes are perhaps not the entire solution – but they have great potential and should continue to be supported by policy makers.”

His acknowledgment that “e-bikes are perhaps not the entire solution” does beg the question of what might complement them – and it’s not too much of a leap to work out what could supply a big part of the answer, that is, safe infrastructure.

E-bikes, as he points out, do create access to cycling for many people who might not otherwise ride a bike – but as survey after survey demonstrates, perception of danger on the roads remains the biggest barrier to getting in the saddle, and protected cycle lanes are regularly flagged up as one of the most important interventions that can help people overcome their fear.

Hopefully, encouraged by the loan from Halfords, the MP will continue to use an e-bike to get around – and the more he rides, the more we suspect he will come to see the benefits of safe space for cyclists, segregated from motor vehicles.