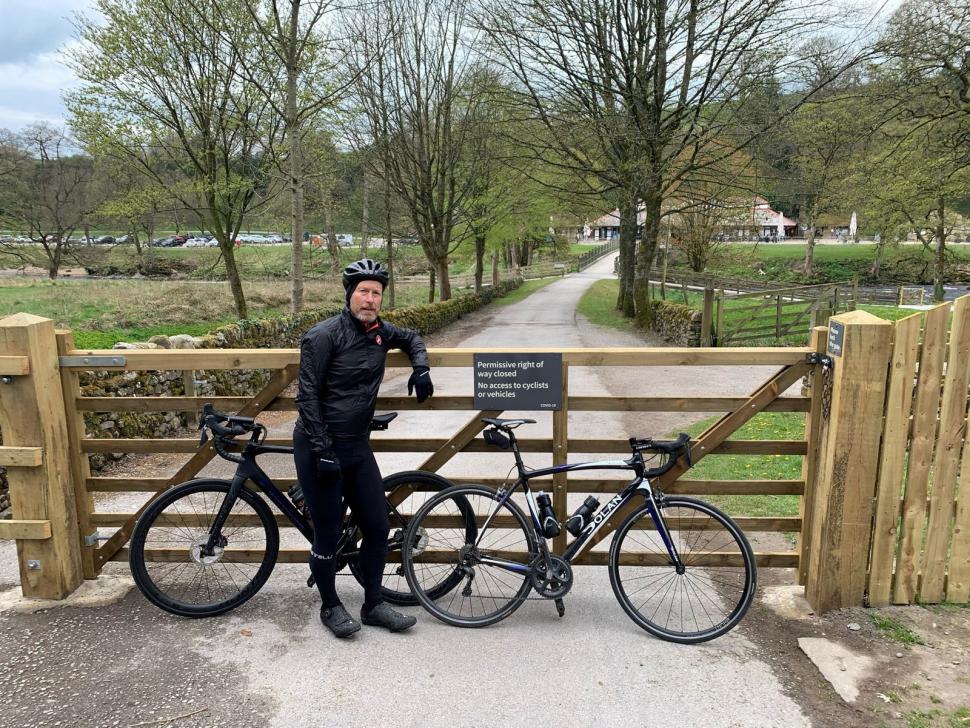 "Cyclists should be able to enjoy the special qualities of our National Parks, instead they are being faced by security guards more appropriately employed outside of nightclubs”...
by Will Bolton

The Duke of Devonshire, who claims tax exemptions in return for allowing public access to his estate, has banned cyclists from most of the 30,000-acre Bolton Abbey estate, Cycling UK say.

The Duke of Devonshire has an estimated net worth of £800 million and in addition to owning the  Bolton Abbey estate, the family are also custodians of Chatsworth House.

This Bank Holiday weekend, visitors will flock to the grounds of stately homes but those on bikes won't be welcomed at the sprawling estate on the western edge of the Yorkshire Dales.

That's because attempts have been stepped up to prevent cyclists using the Wooden Bridge on the estate leading to a popular cycling café, despite the landowner receiving generous tax relief for supposedly welcoming visitors onto the land.

Under terms of the tax relief the Duke of Devonshire receives, the estate must provide access to public roads and permissive footpaths and bridleways.

Duncan Dollimore, Cycling UK head of campaigns said: “Cycling UK looked into this matter a little closer, we found we were really only scratching the surface and that the Devonshire Estate had been failing to provide access to cyclists to estate land for years.

“This is one of the most beautiful landscapes in Yorkshire and it’s easy to see why the estate attracts some 400,000 visitors a year.

"Cyclists should be able to enjoy the special qualities of our National Parks, instead they are being faced by security guards more appropriately employed outside of nightclubs.”

Cycling UK has written to HMRC (Her Majesty’s Revenue and Customs) urging them to investigate the Devonshire Estate’s failure to deliver reasonable public access for cyclists and horse riders - predating the recent closure of the bridge on the Bolton Abbey Estate.

In March the estate made the decision to close access to the Wooden Bridge which Cycling UK say has been used 'for decades' to cross the river from the minor road from Storiths to visit the Cavendish Pavilion tea-room.

The path has been blocked and security guards are reportedly patrolling the area to stop riders - even those pushing their bikes over the bridge - from getting cups of tea.

Mr Dollimore continued: “The estate includes around 80 miles of open moorland, crossed with paths and bridleways suitable for horse riding and cycling, over which there is already an extensive right of access on foot under the Countryside Right of Way Act.

"We’re not asking for complete unrestricted access to thousands of acres of moorlands - despite the fact that this is exactly what CROW access offers for walkers - but at the moment the Estate is claiming a tax exemption by undertaking to allow additional public access, when in reality the access it’s allowing is largely that which walkers are already legally entitled to anyway, which brings into question the justification for the tax exemption.”

Alistair Preston, a company director from Leeds was one rider caught out by the recent change to access.

He said: "As a result of this closure we missed Bolton Abbey from our recent ride itinerary.

"Our group of four people did not get a coffee and a cake at the Cavendish Pavilion, and they lost out on £20-£30 from us alone..

"We would not mind walking with the bikes from the gate to the cafe - it’s only 50 yards."

Landowners of heritage property and other assets such as works of art can receive what is known as a conditional exemption from inheritance tax on that property or assets if they make it available and if it is judged to meet certain criteria.

As part of their own conditionally exempt agreement, the Estate has agreed to provide: “Public access available all year on the public roads and permissive footpaths and bridleways.”

Cycling UK said it received a response from the Estate, saying that it planned to continue the tradition of 'allowing public access wherever possible provided this does not conflict with the conservation objectives and reasonable agricultural, forestry and game management requirements'.

In the letter to HMRC, Cycling UK asks the Revenue to investigate whether the Estate is in breach of the conditional exemption by closing the path over the Wooden Bridge.

The group also asked if HMRC believe the Estate had failed to deliver reasonable access for the public or give sufficient regard to 'the duty to promote opportunities for the understanding and enjoyment of the special qualities of the National Park by the public'.