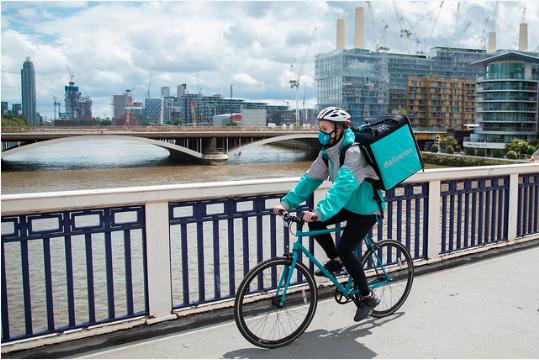 Deliveroo set to pay busiest riders up to £10,000 each

The company say the bonuses are a 'thank you' for the riders' work during the pandemic...
by Will Bolton

Deliveroo is set to hand out almost £16m as a 'thank you' to its riders with the busiest couriers set to receive bonuses of up to £10,000.

The fund is set to launch alongside an expected $7bn (£5bn) stock market flotation in London, the BBC reports.

Deliveroo will also open the flotation to its customers who can buy up to £1,000 worth of shares in the firm.

The announcement could prove controversial as the takeaway delivery company has previously faced heavy criticism over courier pay.

With restaurants closed and everyone stuck at home during the pandemic demand for takeaway meals rocketed over the past year.

The 'bonuses' will only be made to those riders who have worked with Deliveroo for at least a year and completed 2,000 orders. It will cover all 12 countries in which the company currently operate.

Payments will range from a minimum of £200 to a maximum of £10,000, depending on the number of orders that riders have delivered.

The average payout per eligible rider is expected to be £440

Deliveroo, founded in 2013, revealed that more than half the riders set to receive the max payout are based in the UK.

Speaking to the Guardian, Chief executive Will Shu, said: “I want to thank our riders who have been working with us for years, delivering great food and such a fantastic experience for our customers.

"They have been central to our growth and will continue to be.”

The announcement could prove controversial as Deliveroo has been heavily criticised recently over courier wages.

The company argues that riders are self employed, independent contractors not entitled to the national minimum wage, holiday pay or pensions.

It insists the majority of its riders prefer the gig-economy model.

Deliveroo claim they are offering the cash payout as they are unable to legally give their riders shares in the stock market launch because they are not employees.

From Monday, March 8, all customers who have previously placed an order will be also able to register their interest in applying for up to £1,000 of shares in the flotation.

Deliveroo said it would make £50m worth of shares available to customers.

Restrictions on hospitality businesses are currently set to ease on 12 April.