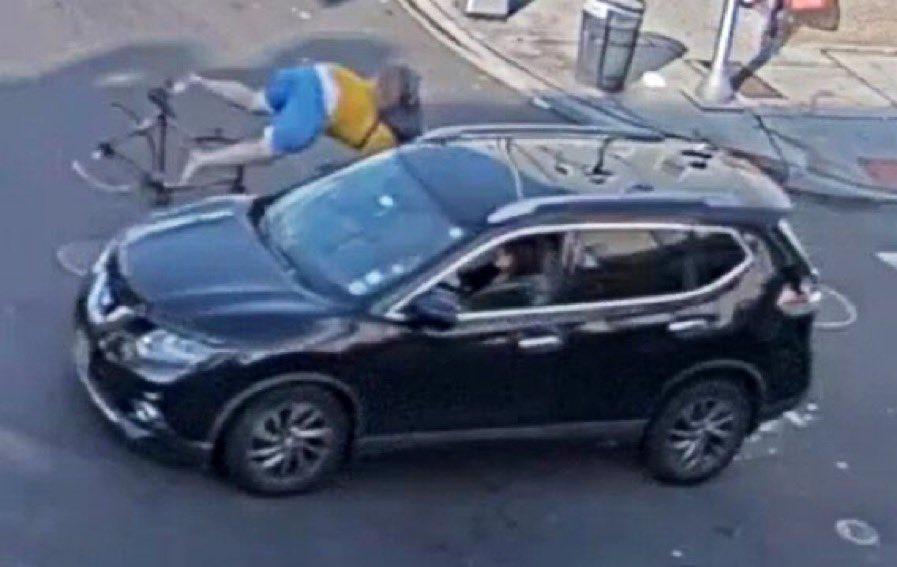 A councillor in New Jersey is facing calls to resign after striking a delivery cyclist with her car, driving off while the rider lay injured on the road, and waiting six hours to report the incident to the police.

Amy DeGise, a Jersey City councilperson and former chair of the Hudson County Democrats, struck cyclist Andrew Black at a busy junction in the city just before 8am on Tuesday 19 July.

In the video below, captured by street cameras, it appears that Black, an Uber Eats deliverer, rode through a red light before he was hit by DeGise, who doesn’t seem to attempt to avoid the collision or even slow down after striking the cyclist.

After being helped by police at the scene, Black was then taken in an ambulance to the Jersey City Medical Centre. He suffered no serious injuries in the collision, but his bike was destroyed. He has since started a fundraiser to purchase a new bike so he can “get back to work”.

The day after the incident, a source close to the Democrat politician told the Jersey Journal that DeGise struck her head during the collision and, once she had realised what had happened, she reported it immediately to the police.

However, that claim has since been proven to be false, as footage released to the press shows DeGise entering the Jersey City Police Department’s West District precinct at 2pm, over six hours after the collision.

A spokesperson for Jersey City said the police crash report had been completed by the time DeGise, who was not required to take a breathalyser or drug test, made her statement.

29-year-old cyclist Black told the Jersey Journal that the six-hour gap between the crash and DeGise’s appearance at the police station made it appear that she had “something to hide”.

Megan Carolan, a researcher at the National Institute for Early Education Research at Rutgers University and the author of a petition calling for DeGise to resign, said she “felt sick” to learn that the councillor had waited six hours before reporting the hit and run.

“I think that some folks have really been relying hard on this idea that she did the right thing eventually,” Carolan said.

“Six hours is not doing the right thing. It’s not.

As part of her petition, which currently has close to 3,000 signatures, Carolan said: “As an at-large member of the council, Councilmember DeGise has the hefty task of representing the full city and the best interests of all its residents.

“By striking and abandoning one of those residents, in a time of crisis, she has shown she cannot be trusted to put the well-being of residents first.

“To hit a constituent and leave them speaks to a deeply troubling level of self-preservation instinct, and one that has no place in public service.”

Yesterday, a rally was held in the city to demand that DeGise step down from her post, following what organisers described as a “callous, immoral, illegal act”.

Word is @Amy_DeGise thinks this story will blow over. The people of Jersey City should show her it won’t. #ResignDegise #DegiseHitandRun pic.twitter.com/mWCDx50uQ3

However, the councillor, whose father Tom DeGise has served as the Hudson County Executive since 2002, has so far resisted calls to resign over the incident.

“Councilwoman DeGise was elected overwhelmingly just a few months ago and she has no intention of walking away from the commitment she made to serve the people of Jersey City,” her spokesperson said.

“Amy recognizes the calls that have been made for additional information and transparency. She would very much like to address this situation more comprehensively, but there is a legal process that must play out first and she will not be making any additional public comment at this time.”

“That was the correct move under those circumstances after leaving.”