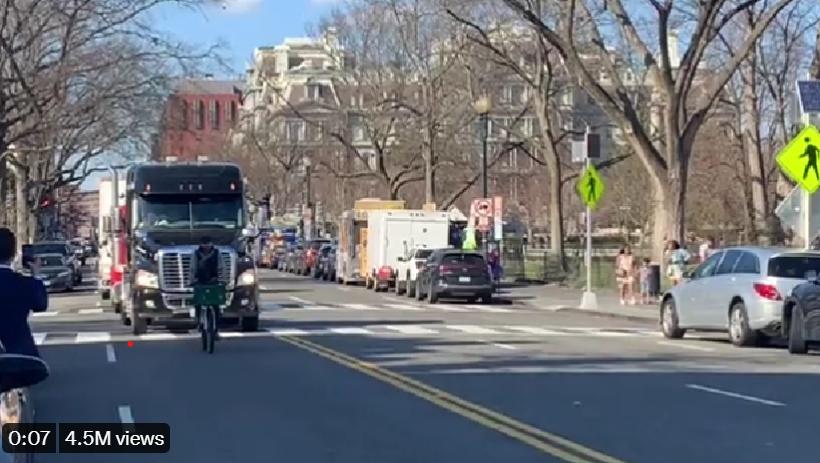 One cyclist was all it took to bring the so-called ‘People’s Convoy’ protest by American truckers grinding to a halt in Washington DC yesterday, reports Newsweek.

A video posted to Twitter on Saturday showing the cyclist riding slowly in front of the lead truck went viral on the social network, attracting more than 4 million views at the time of writing.

Posted from the account @ShutDown_DC, which describes itself in its biography as “an organizing space where individuals and groups can come together to organize direct action in the fight for justice,” the tweet said: “Big powerful convoy slowed down by… a single bicyclist.”

A subsequent tweet said: “Shoutout to all the activists who have been tracking and fucking with this silly convoy since they got to the area.”

Comprising hundreds of drivers of trucks and other vehicles, the ‘People’s Convoy’ is said to have been inspired by the ‘Freedom Convoy’ protest in Ottawa last month that brought the Canadian capital to a standstill.

Setting off in February from Adelanto, California, among other things it protests against what a spokesperson quoted in the Washington Post describes as “unscientific and illogical mandates” to wear masks and get vaccinated against COVID-19.

Brian Brase, one of the organisers of the convoy, told the newspaper: “It’s time to remind the government, not just here in the US but across the world, that they work for us.

“This convoy, and these truckers, believe in freedom and your right to do, to think, to act and say what you feel. At this point, it is the civic duty of the American people to stand up.

“Freedom takes sacrifice, and since it’s been lost, it is this convoy that will begin to stand up and take it back.”

While the convoy may have received a warm reception as it travelled through America’s heartland, the reaction in Washington DC has been rather less welcoming, with people in this video shot by Axios reporter Andrew Solender heard telling the truckers to “go home” and “fuck off.”

The trucker convoy is making its way through Capitol Hill horns blaring, with residents yelling at them to “go home” and “fuck off” pic.twitter.com/Mb7hSyEqG1