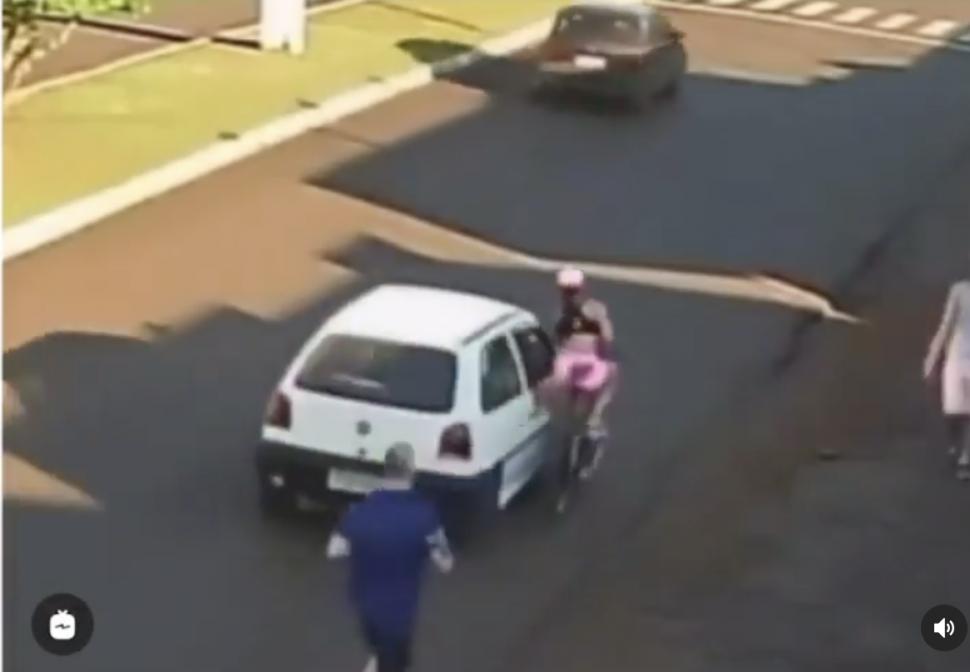 "Us women don't have a minute of peace. I leave home to ride a bike and come home all bruised because of a bunch of cowards"...
by Will Bolton

A female cyclist was knocked off her bike after she was grabbed by a 'coward' in a passing car who tried to grope her.

As she rides along the passenger of a white car stretches out his right arm and starts to grab her bottom through the window of his car.

The driver of the car gets so close to the cyclist that its wing mirror hits her bike and knocks her to the ground.

A number of pedestrians immediately rushed over to help Ms Lustosa while the car sped off.

Ms Lustosa posted the CCTV footage on Instagram alongside a message which said: "Unfortunately, it was much worse than I imagined.

"Us women don't have a minute of peace. I leave home to ride a bike and come home all bruised because of a bunch of cowards.

"All appropriate measures are being taken. I'm fine. I just want them to pay for what they have done. Please share."

In an earlier message asking the public for help, she said: "Someone has to stop these abusers so they understand they should respect a woman.

"It's a degrading situation for anyone to have to experience and in the 21st century very sad."

Loureiro & Lehnhard, the law firm where Andressa is said to work, said in a statement: "We publicly express our deepest indignation for the regrettable episode that took place on September 26 in Palmas, against collaborator Andressa Lustosa.

"This disgusting and extremely cowardly act makes it evident, once again, that sexism rooted in society is a serious problem, which daily threatens the lives and integrity of women, just because they are a woman.

"Macho culture must be confronted and broken so that any form of gender-based violence is eradicated.

"Situations like this cannot be seen as something normal or commonplace. It is neither a joke nor a joke and any tolerance for these social standards must be abolished...

"The struggle must persist until such time as all women can be themselves, wherever they are, in safety.

"We offer our solidarity to the victim and to other women who daily experience situations like this.

"All judicial and administrative measures are being taken to hold the culprits accountable."