Welcome to Wednesday's live blog, with Liam Cahill and Jack Sexty providing your updates throughout the day... 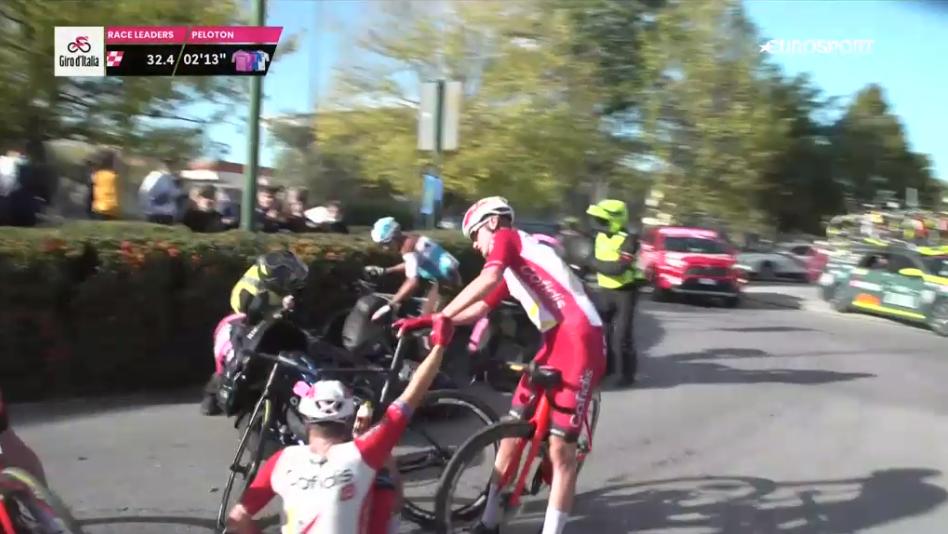 The handlebars of Bahrain-McLaren rider Ivan Cortina's Merida bike were well and truly snapped in that late crash at the Scheldeprijs today ... let's hope he fared better.

Unfortunately, @ivan_cortina was involved in a crash in the sprint finish at @Scheldeprijs.

Shocking. And the police didn't seem too concerned.

@metpoliceuk didn't want to send officers when I called 999. I have to ask - if i'd been assaulted by a knife would officers have come? Why is it less serious when someone's driving a 1 ton 4x4? @London_Cycling

Some talking points regarding rider safety today, what with Pascal Ackermann getting relegated for causing that late crash at Scheldeprijs - and, a couple of hours earlier, a moto rider at the Giro d'Italia knocking Elia Viviani off his bike.

The Cofidis rider got back on and finished the stage with a top 10 finish in the sprint in Rimini ... the moto rider will be packing his bags after being kicked off the race and handed a 500 Swiss Franc fine to boot.

It looks like Cav didn't contest the sprint (or was dropped, we're not 100% certain right now), with Lotto Soudal's Ewan winning with relative ease. We understand that Pascal Ackermann, who crossed the line in second, has been disqualified for moving across the line of August Jensen.

Ackermann clearly takes out the front wheel of the Riwal rider August Jensen (while deviating from his line/lane). Should obviously be a relegation (2.3.036), but does the jury care if it's not at the front and not a big name? #Scheldeprijs #Scheldeprijs20 #Scheldeprijs2020 pic.twitter.com/eXBCAM77Ih

The 23-year-old, who was left with a gaping hole in her left leg after a horrendous crash during the World Championship time trial three weeks ago, has had her stitches out. Yesterday the 2019 TT world champ posted another photo of her 'Frankenleg' before removal, and now has an impressive scar to show for it.

Dygert told the Indy Star that this latest setback hasn't affected her mental health in the same way a crash in 2018 did, which left her concussed and with an altered personality.

“There was never a time I felt bad for myself" said Dygert. “There’s obviously bad days. But I’m positive. I’m not stressed. I’m not worried. I’m not mad. I’m not resentful.

One hour of cycling a day, that's my simple challenge.

Thanks, mate. Really looking forward to trying out this cycling thing. Never tried it before. I've been cycling for the past 40 or so years, but thanks.

If you're not familiar with the Scottish comedian, his sense of humour is nuanced to say the least. 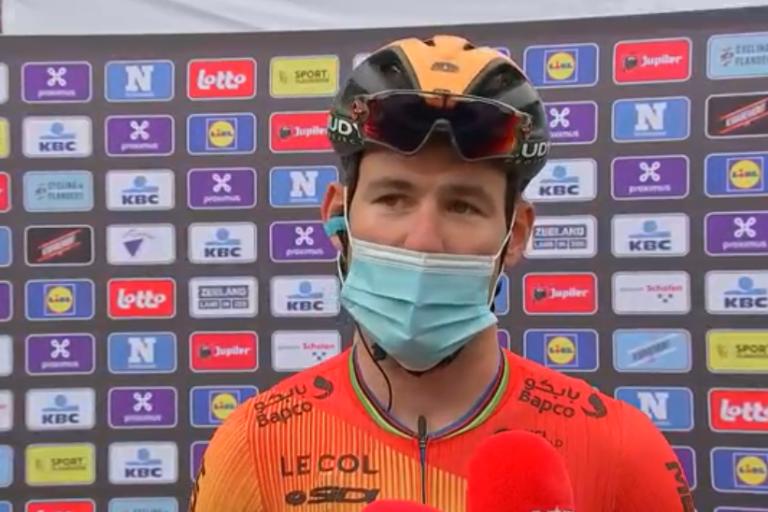 Bahrain-McLaren star explains why he thought Sunday's Gent Wevelgem may have been the last race of his career
0
14 October 2020, 14:07
Kids' bike on treadmill skillz

Training hard for the last appointments of the year 😃 pic.twitter.com/h0FXfwRPwq

FLYING ALONG: Footage shared by police in Ohio shows 'Goostov,' a well-known local goose, keeping up with a fast-moving cyclist. https://t.co/UohLlpsu9C pic.twitter.com/Ajgh1aP6yo

Goostov is apparently very well know around Pepper Pike, Ohio. He flys alongside cyclists and he must be an absolute nightmare to drop!

We're not really sure why he does this but if we know the body language of geese, and we don't, it looks like he enjoys it. We saw his emotional interview at the end of Gent-Wevelgem, but after thinking that Sunday's race could have been his last, Cavendish has started today's Scheldeprijs.

He has spoken at the start line and we'll have his full interview very shortly. Thankfully for fans of the Manx Missile, it sounds like he has every intention of racing next year.

We now go live to the roads of Cheshire... https://t.co/dneiw7bkfj

You know a pothole is bad when it sends you into orbit...

And seeing as it's a rather quiet Wednesday, let's have a sock comp. Best (worst) mechanical caused by a pothole wins a piar of road.cc socks. Bonus points for entertaining us with pictures of said mechanical and/or offending pothole.

You can get them at shop.road.cc too. Along with the usual tat, there's some good stuff here like up to 50% off Gore.

But will you be avoiding Amazon after the recent news about its tax situation?

Halfway point of the Giro today. There’s should really be a big banner with fireworks, fanfare and everything at the “metà percorso” (halfway course). And maybe an obligatory cafe stop. I’d like this very much pls. pic.twitter.com/icKV4Kz6di

This is a potential addition to all races that we could get behind. Who doesn't love a mid-ride coffee and a slice of cake?

Jakob Fuglsang about his teammates and staff since the start of this Giro. Google Translated. You tell me that he has a contract with Astana for 2021? I don't believe you. #Giro pic.twitter.com/IOTK39P4Ta

Fuglsang lost a key teammate in the Giro's opening time trial after Miguel Angle Lopez crashed out having hit a sunken drain cover. That has left the Danish GC rider a little isolated at important moments but is he right to have a pop at his teammates?

Things must be rather tense around the breakfast table...

14 October 2020, 08:24
Nose flows after bozo goes to throws over clothes he supposed were pantyhose 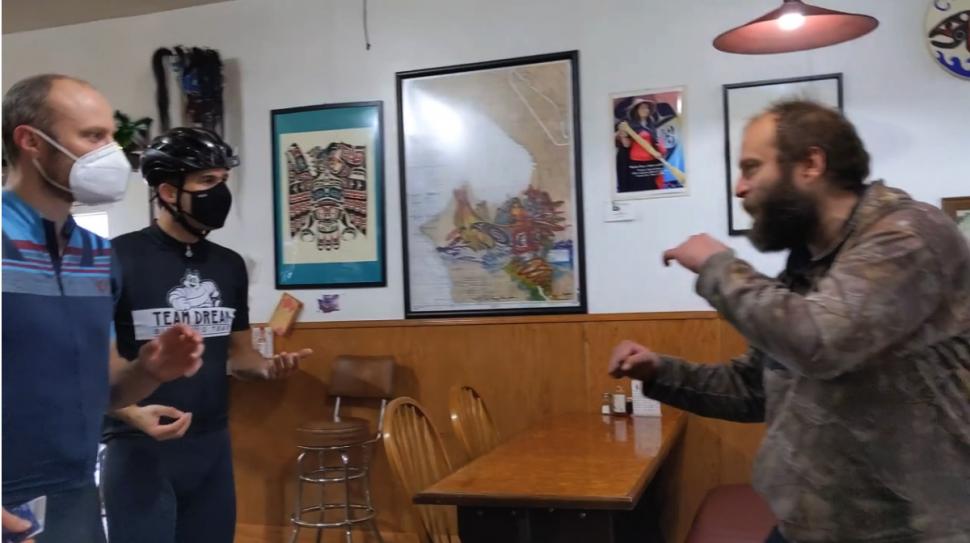 A small group of cyclists were attacked at a cafe in Amanda Park, Washington, seemingly just because they were dressed in "pantyhose" as their attacker put it.

Reddit user, and one of the cyclists in the video, elzibet, gave some context under the video:

Me, my brother, and two other guys did a four-day 400-mile ride from Seattle, WA to Astoria, OR. All in all it was a great trip, except for this one incident.

We were stopped in a small community (Amanda Park, WA) along our route to get some lunch. We went inside while one of the guys, Andrejs, waited outside with our bikes. A few seconds later he comes running in saying someone hit him. This someone comes rushing in behind him and starts taking swings at all of us. Joel and I do our best to diffuse the situation. The guy runs out of the restaurant after he makes it clear that we aren’t supposed to wear pantyhose. He tries to come back in and swing at me, but I’m able to block his punch with the door. The restaurant staff seem to know who he is and they tell him to leave. After he leaves, we find out that the guy had waited until Andrejs had laid down on a bench to rest and then sucker punched him in the nose.

Luckily my wife was running sag that day, and took Andrejs to the hospital to get stitched up and he's doing better. The video in this post shows the confrontation after the punch (wife was quick on the camera draw).

The guy was arrested shortly after this video.