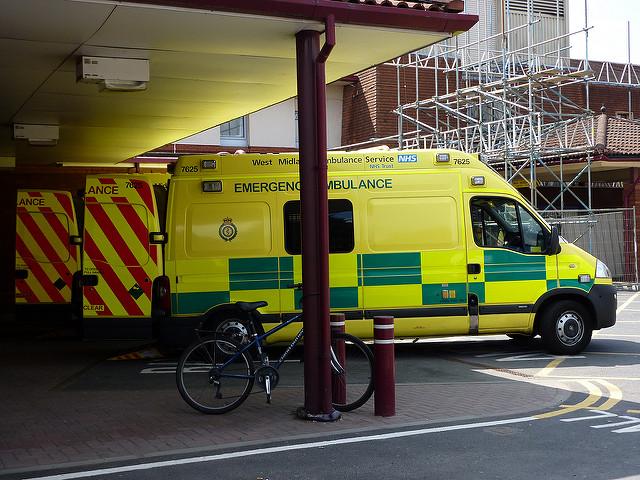 WMAS ambulance (licensed CC BY SA 2.0 by Lydia on Flickr).jpg

Couple in hospital after they both crash in huge pothole

"Potholes are just death traps and if the council don’t do something about them, someone will eventually lose their life, as we nearly did - the parents of three children."...
by Will Bolton

A couple are calling for action after they crashed in a pothole and were both forced to go to hospital with serious injuries.

Bettina Scarlata, 49, and her husband, Mark, 48, both hit the four inch deep, two foot wide and four foot long pothole while out on an 80km ride.

The couple were cycling into Wickhambrook, Suffolk, on July 17 when they hit the pothole.

Mark Scarlata, a priest and teacher, was thrown from his brand new Factor road bike and suffered six broken ribs, a broken collar bone, a fractured spine, and a fractured finger.

His wife suffered traumatic head injury and shattered elbows, and has no memory of the accident after suffering concussion.

Speaking to Suffolk News, Mrs Scarlata said: “Mark is now immobile as he recovers and the doctors thought most certainly, I would have been dead, or have lifelong brain damage, if I hadn’t been wearing a helmet.

“They still don’t know if I will regain full use of my arm, which now has metal plates, and Mark has a CT scan coming up for another look at his spine.

“Mark hit the pothole first and then I did seconds later and we both went flying off our bikes.

"I have no memory of the accident and just remember waking up in hospital.

"We were both there for four days in total."

Mrs Scarlata, a heritage school worker,  added: "Potholes are just death traps and if the council don’t do something about them, someone will eventually lose their life, as we nearly did - the parents of three children."

The couple, from Cambridge, were taken by ambulance to West Suffolk Hospital.

They had been riding an 80km route and were travelling around 25mph when they hit the pothole.

A spokesman for Suffolk Highways said in relation to the Scarlata's accident: “We are very sorry to hear of the accident in Wickhambrook and wish the couple involved a quick recovery.

“The pothole had been inspected, marked up and was awaiting repair in line with our maintenance policy.

"However, in light of the incident our teams have carried out a temporary fix prior to a more permanent repair in the coming weeks.

"Although we repair many thousands of potholes every year, unfortunately not all potholes can be eradicated at once which is why we encourage all road users to take extra care and drive to the conditions of the road."