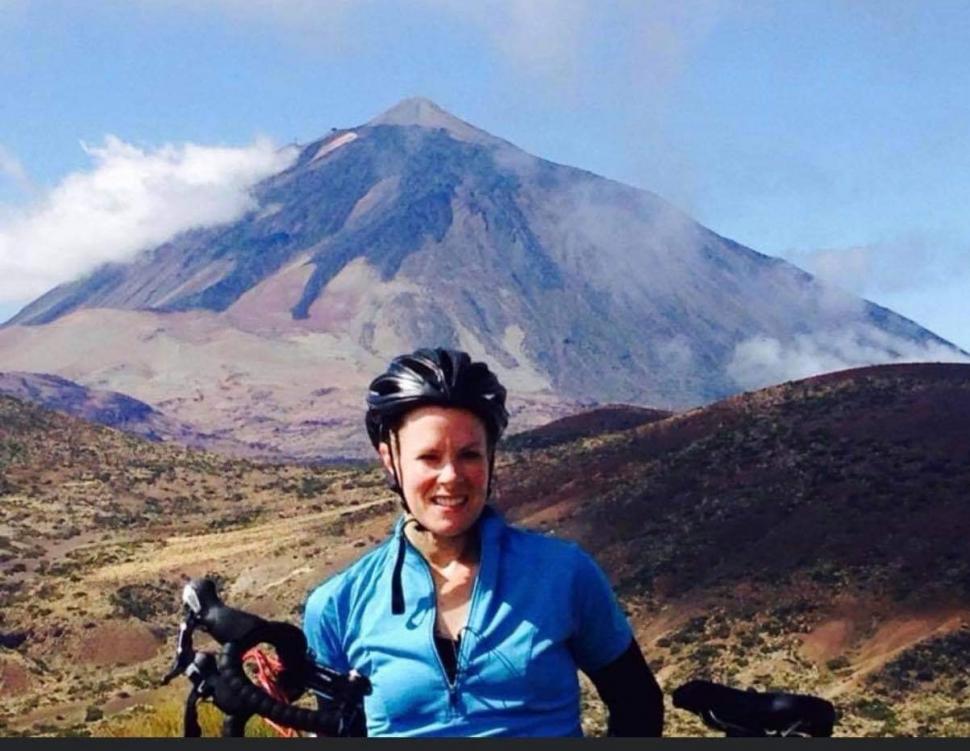 "She was happiest out riding and socialising with her friends in sunshine or rain.”...
by Will Bolton

A cycling club led a 'cycle of honour' in memory of a mum who was tragically killed in a collision with a motorist.

Louise Harrott, 43, died after being airlifted from the scene of the crash last month and now her family are calling for better 'road sharing education' to prevent more people being killed for doing the thing they love.

Her mother, Doreen McGivern said Louise was 'the fabric of our family' and had 'a true sense of belonging' with her cycling club.

British cycling said her death was 'symptomatic of a road network that prioritises driving over cyclists and pedestrians' and that 'no-one should have to be brave to go for a cycle'.

Members of Saddleworth Clarion Cycling Club rode in their group colours to accompany Louise's funeral procession, with Louise’s coffin draped with a Clarion banner as relatives and friends said their final farewell to the much-loved mother-of-one.

The Manchester Evening News report that Louise had run the Dukinfield hotel Barton Villa on Crescent Road for the past 14 years.

A former pupil at All Saints High School, Dukinfield, law graduate Louise took over running the hotel from her mum Doreen.

As her funeral procession made its way through Dukinfield riders wearing black arm bands formed a guard of honour to pay their respects to their beloved team member.

Louise had fallen in love with road cycling eight years ago and trained to a high standard, riding in the Peak District, Cheshire plains, Yorkshire and Wiltshire as well as up the Mount Teidi volcano in Tenerife.

Some of her ashes will be scattered at Nont Sarah’s in Yorkshire, one of her favourite rides, where she loved the long, steady, climb up Buckstones hill.

Louise’s mum, Doreen, 72, said: “Louise’s love and loyalty knew no bounds. She was the fabric of the family and the person that held everything together.

“There was nothing more important in her life than her son, her two brothers, her aunty, her best friend, employees and her Clarion family.

"She had a true sense of belonging with her cycling team.

"She was happiest out riding and socialising with her friends in sunshine or rain.”

In May 2019 Louise undertook the iconic Fred Whitton challenge, a gruelling 183.57km ride with an elevation of 3,282 metres, completing it in eight hours 31 minutes.

The challenge is of the most popular sportives in the country and considered by many to be the toughest, with the route including some of the country’s most feared climbs.

Dave Watson, chairman of the Saddleworth Clarion Cycling Club, added: “Louise’s death will be grieved not only by her family and friends but by the 100-plus members of the cycling club to which she devoted so much of her time.

"She had an impressive determination on the bike and was an extremely experienced cyclist, taking part in events throughout the north, covering distances of up to and beyond 100 miles.

"She will be missed by her cycling comrades everywhere.”

Louise was out cycling on Wednesday, March 24 when she was involved in a collision involving the driver of a black Range Rover at the junction of Huddersfield Road and Stamford Road.

She was taken to Manchester Royal Infirmary for surgery but she sadly died on the morning of Thursday, March 25.

The driver of the Range Rover remained at the scene and assisted police with their enquiries. No arrests were made.

An inquest into Louise’s death was opened and adjourned at Rochdale Coroners' Court on Monday, April 12.

The court heard Louise was riding along Huddersfield Road, Oldham, Greater Manchester when a vehicle turned across her path at the junction with Stamford Road.

Now, Louise's family are calling on Oldham Council and its highways team to improve road layout at the site after learning that this is the second fatality to occur at that location.

Doreen added: “We’re launching this important campaign for the love of Louise.

"We’re getting more and more people riding bikes, especially now post-Covid, everyone is being encouraged to take it up.

"We’ve got to find ways to make it safer though. Mutual respect and consideration between all road users is key.

"We can all be more mindful when we drive, ride or walk to look out for each other’s safety.”

Nick Chamberlin, policy manager at British Cycling, said: “No one should have to be brave just to go for a bike ride.

"No-one’s family and friends should have to worry about whether a loved one might be hurt or killed just because they like, or have to, cycle.

“Louise’s tragic death is symptomatic of a road network that designs driving as the first priority over cyclists and pedestrians.”

In lieu of flowers the family has requested donations to their chosen charity Cycling UK at louise-harrott.muchloved.com

An Oldham Council spokesman said: “Oldham Council was very saddened to hear about the death of Louise Harrott and our thoughts are with her family and friends at what must be a very distressing time.

“Our staff liaised with colleagues from GMP following the incident and a report is being prepared as part of the inquest into Louise’s death."