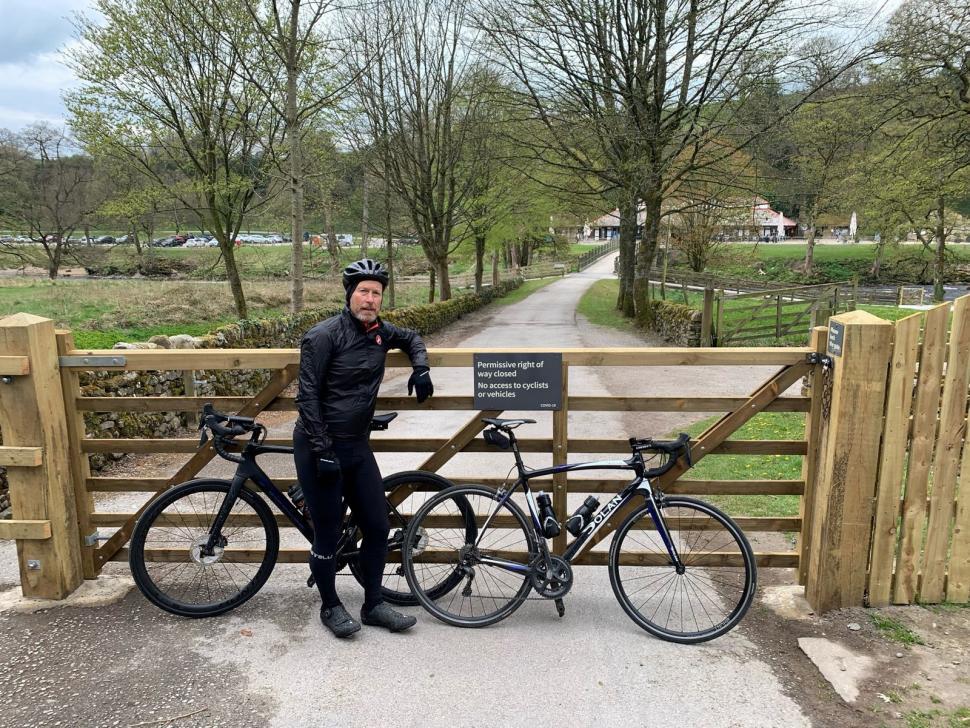 The Bolton Abbey estate in Wharfedale, North Yorkshire has denied employing security guards to turn cyclists away from a bridge leading to a popular café there, saying instead that members of staff will at times outline to visitors restrictions brought in during the coronavirus pandemic – but have no powers to enforce them.

As we reported on Saturday, Cycling UK has highlighted how some cyclists visiting the historic estate, owned by the Duke of Devonshire, were prevented from crossing a wooden bridge leading to the Cavendish Pavilion Café.

Duncan Dollimore, campaigns manager at the national cycling charity, said: “Cyclists should be able to enjoy the special qualities of our National Parks, instead they are being faced by security guards more appropriately employed outside of nightclubs.”

Cycling UK also said that had written to Her Majesty’s Customs & Excise to ask it to investigate the failure of the Devonshire Estate – which also owns Chatsworth House – to deliver reasonable public access for cyclists and horse riders, predating the closure of the bridge at Bolton Abbey.

A spokesman for the Bolton Abbey estate, quoted in the Yorkshire Post, outlined that the decision to close the wooden bridge was a temporary measure due to coronavirus restrictions, and also claimed that some signs were being removed without authorisation.

“Bolton Abbey has welcomed cyclists onto the estate for many years and many thousands have enjoyed its miles of tracks and pathways,” he said.

“During the pandemic, to enable safe social distancing and protect the health and wellbeing of our visitors and colleagues, use of the Cavendish Bridge at Bolton Abbey is currently restricted to pedestrians only.

“This measure was introduced in April 2020, in response to the Covid-19 pandemic,” the spokesman claimed.

“This restriction is explained on signs at the approach to the bridge. We are aware that there have been instances of these signs being removed, and when this happens, we ensure they are replaced as quickly as possible.

“On busy days a member of the Bolton Abbey team is located on the bridge to remind visitors of the rule.”

Highlighting that an alternative route to the café was available to cyclists, he said: “Access for cyclists to the estate, including the Cavendish Pavilion and toilets, is via Riverside Drive.

“Once social distancing rules relating to Covid-19 are no longer in force, the restrictions on cyclists using the bridge will be lifted.

“The route in question is registered as a permissive path on the OS map, not a public right of way,” he added.

According to the spokesman, the estate is open to discussions with cycling organisations to talk about any concerns they may have.

“We have enjoyed a positive relationship with cyclists on the estate for many years and would welcome a constructive dialogue with cycling groups with regard to any concerns they might have,” he said.

One road.cc reader who contacted us after our story at the weekend, however, said that he had been told to leave the estate while cycling there by a warden several years ago.

“I too was accosted by an initially aggressive warden when mountain biking on tracks near the reservoirs on the estate,” he said. “This was about three years ago and I had got lost and ended up on the track unwittingly.

“I was told to leave, which I did whilst passing numerous walkers.”

He added: “I emailed Bolton Abbey later to ask why cyclists were not permitted access but received no response.”