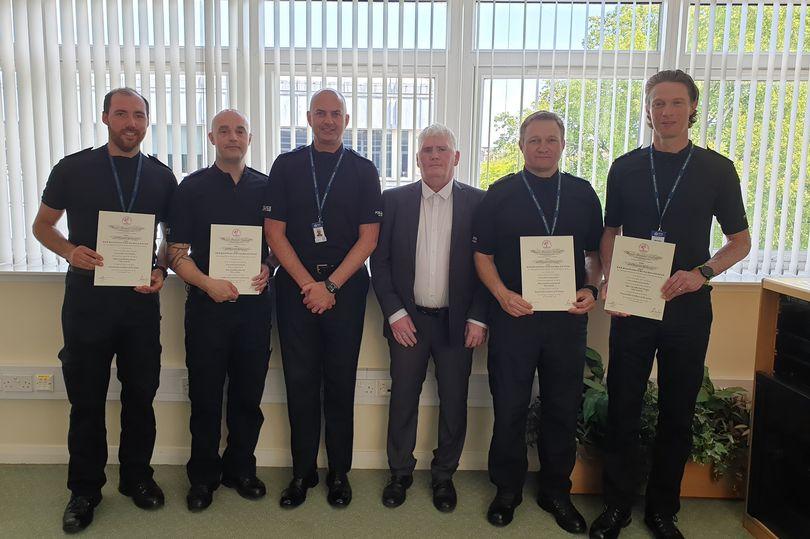 Tayside Police Mountain Rescue Team were returning from training when they found George McClure, who had crashed following an aneurysm
by Simon_MacMichael

A group of police officers who saved the life of a cyclist who had ‘died’ at the roadside for almost a quarter of an hour have received an award to recognise their role in saving his life.

The officers from Police Scotland’s Tayside Police Mountain Rescue Team were travelling back to base along the A94 close to Forfar when they came across 56 year old George McClure, who is believed to have crashed into a pole due to an aneurysm, reports the Daily Record.

Fortunately, they had a defibrillator in their vehicle and spent 13 minutes trying to revive the stricken cyclist, whose injuries included a broken neck and collarbone as well as facial wounds and bleeding on the brain.

A specialist trauma team of medics was called to the scene and spent a further 90 minutes stabilising him following the crash in July 2021 before he was taken to hospital, where he spent a month in an induced coma.

PCs Justin Coff, Rory Drumm, Gavin Howard and Paul Morgan were this week presented by Mr McClure and Chief Superintendent Phil Davison with certificates from the Royal Humane Society for their life-saving actions.

Mr McClure, from Kirriemuir, has made a full recovery and said: “I was unlucky with the accident – but I couldn’t have been luckier with the people who stopped to help. They saved my life.”

He was discovered by his wife Morag, who said: “It was a Sunday afternoon and I was working, so George had cycled down from Kirrie.

“He set off for home and I left just behind him in the car because I had finished my shift.”

She said that when she found him following the crash, “I couldn’t even dial 999 for fear, and ended up Facetiming my daughter, Ashley instead.

“The next vehicle was the police mountain rescue team who had been on training. They had a defibrillator in their Land Rover and used it on George.

“He died for 13 minutes,” she continued. “He was too far gone for an air ambulance. The trauma team spent an hour and a half working on him at the roadside.

“George also broke every bone in his face from his forehead to his top lip – only his lower jaw escaped. He was unrecognisable.

“In HDU there were two male patients and his injuries were so bad my other daughter, Helen, didn’t know which one he was.”

His family has now raised money for a defibrillator to be installed next to the A94 junction of the dual carriageway which runs from Aberdeen to Dundee.