We've got two tests for the price of one in our latest bike to land at road.cc towers. On the one hand there's Ridley's new Fenix C frameset, which is a comfort performance platform from the Belgian manufacturer now coming in to the UK via distributor Sportline. On the other we have a full Shimano Ultegra 6800 groupset: one down from race-level Dura Ace, dripping with trickle-down technology and now updated to 11-speed. Both will be getting a thorough test. 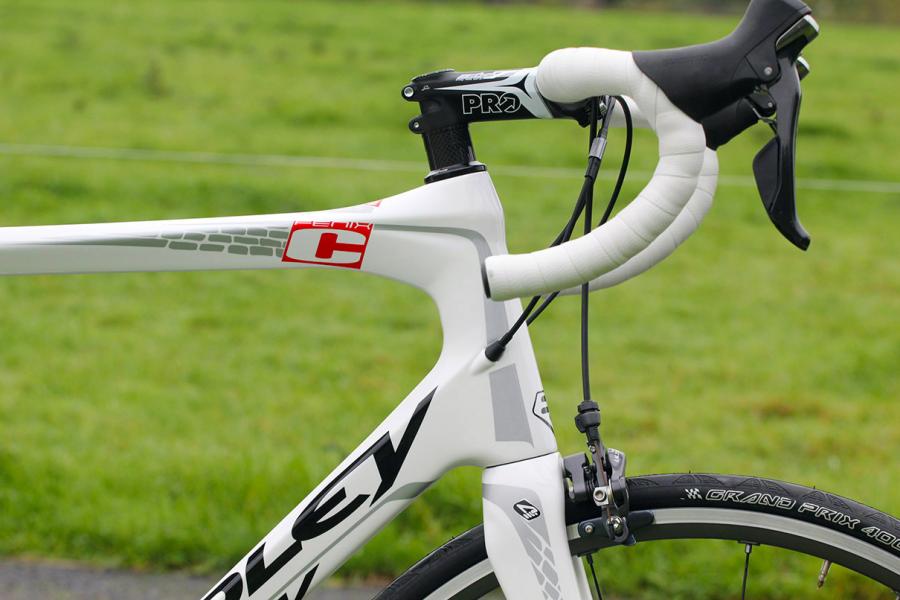 Let's kick off with the frameset. The Fenix frameset is born out of two of Ridley's most successful carbon frames – the Damocles and the Excalibur – and it's designed to offer "Comfort, stiffness and strength in equal measure", according to the manufacturer. All things to all cyclists then? Well, all racing cyclists perhaps. If they'd just gone ahead and said, 'this is a sportive bike' then no-one round here would have batted an eyelid; our large frame has a 585mm effective top tube, 205mm head tube and room for a 25mm tyre (but no mounts for mudguards) which lands it squarely in the 'sporty but not racy' middle ground. We've got a mechanical groupset but if you want to build it with electronic running gear it's fully Di2 and EPS compatible. 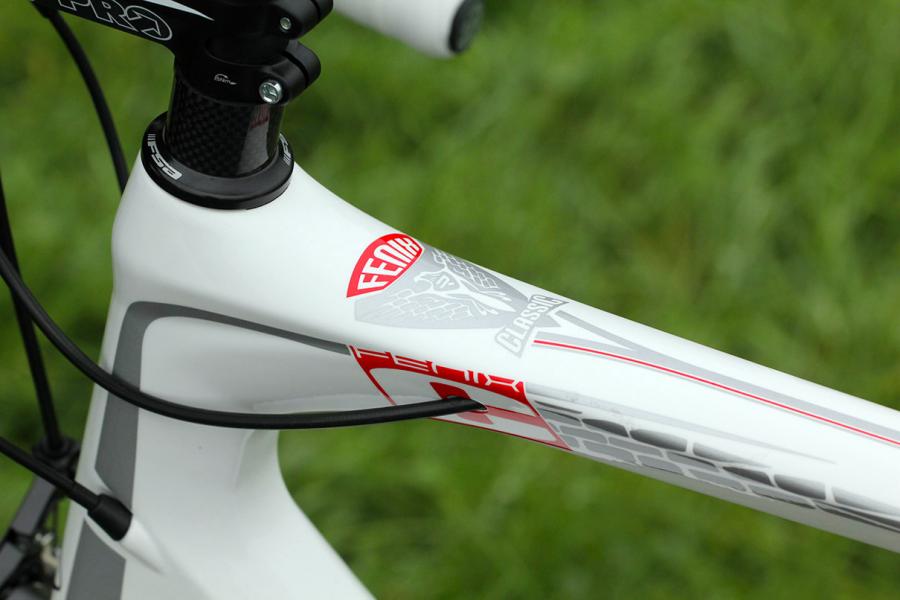 Ridley use a diamond-section tube in their carbon frames (as referenced on their logo) which they claim gives excellent stiffness; they've added extra carbon to the outside edges of the Fenix tubes to make it a bit more hardy and resistant to side impacts. The 1 1/8" to 1 1/2" head tube – now an accepted standard, but one pioneered by Ridley – and the BB30 bottom bracket suggest plenty of directness up front. Towards the rear the seatstays are flattened in the central section to provide a degree of cushioning, and the whole frame is not made from über-stiff 50T or 60T fibres, but mainly 24T carbon. The extra carbon in the mould and the lower-tonnage fibres mean this isn't the lightest carbon frame out there. The claimed weight for a medium frame is 1,230g (1,270g for the large we have) with another 390g for the fork. That's a couple of hundred grams more than the average for this level of frame and half a kilo more than some superlight offerings, but it's still possible to build it up to be nice and light. Our test bike, with Ultegra 6800 everything (including wheels) and alloy finishing kit from Pro tipped the scales at 7.85kg. A sub-7kg build would easily be achievable with the right stock parts. 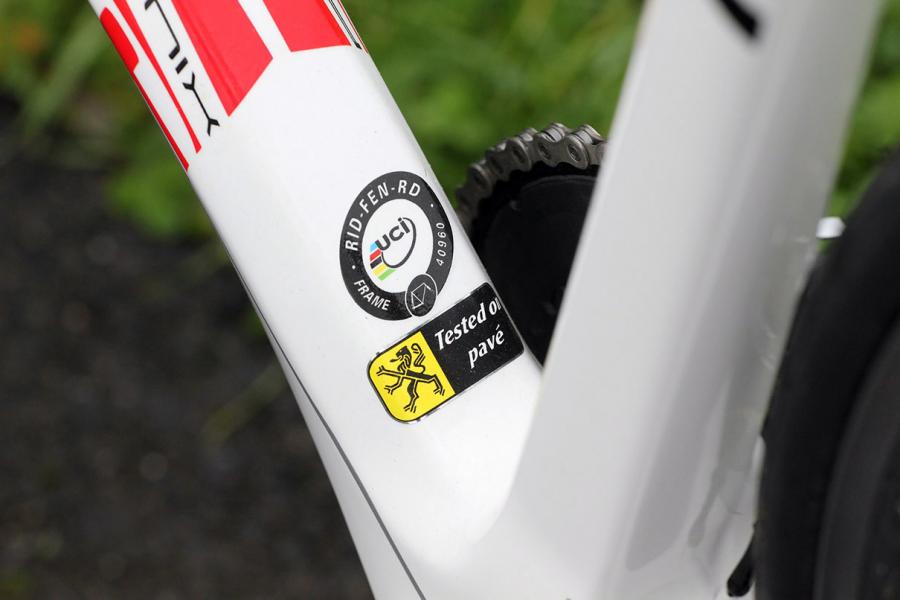 It's not all about light though. The 'Tested on Pavé' sticker gives a nod to Ridley's intentions in creating the Fenix: they reckon it's comfy, and it's also race proven. André Greipel has piloted the Fenix in the Spring Classics, showing that it's not just for your local 100km sportive. It should be a good tool for the long haul and the broken back-roads around the office, so we'll be aiming it at the lanes to find out if it delivers. 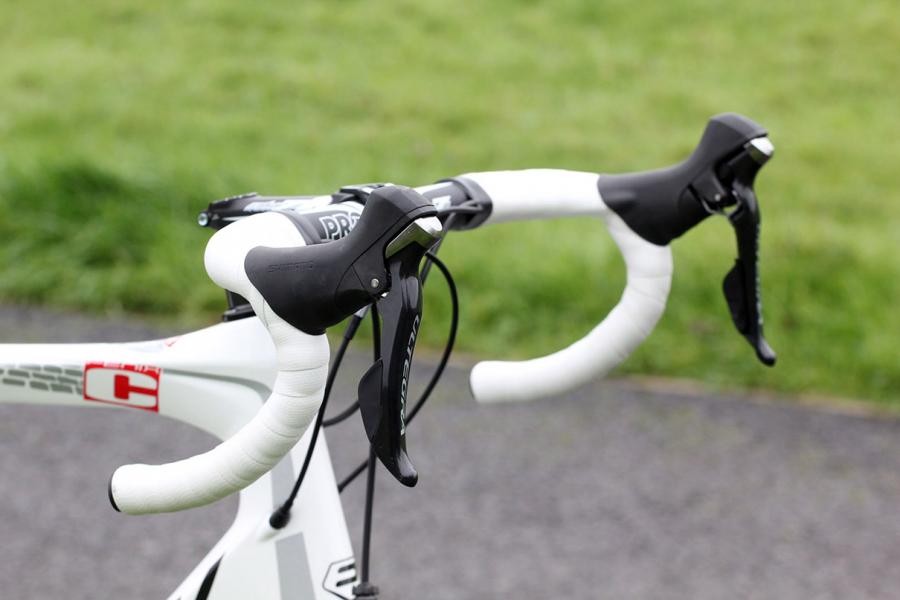 Hanging off that Ridley frame is Shimano's newest incarnation of the Ultegra groupset, 6800. It launched on May 1 this year, and we covered it in depth back then but let's look at the key points again. 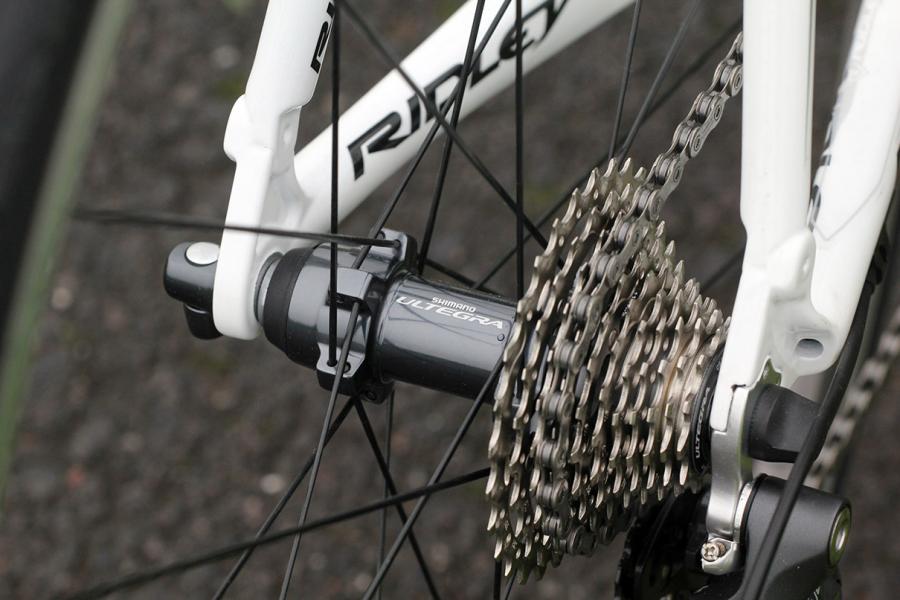 First of all, this one goes up to 11. Ultegra has followed Dura Ace (and Campag, of course) in adding another sprocket to the back. That's not the only thing that's trickled down from Shimano's top-tier groupset either. The lever shape has been redesigned, and there's been plenty of work going on to tweak the feel of the shifts. At the rear that means equal force on the lever for every shift, right across the block. Shimano call that Vivid Indexing. At the front the mech has a longer pull arm and a different ratio which Shimano claim makes the front shift much easier, requiring less force and lever throw. 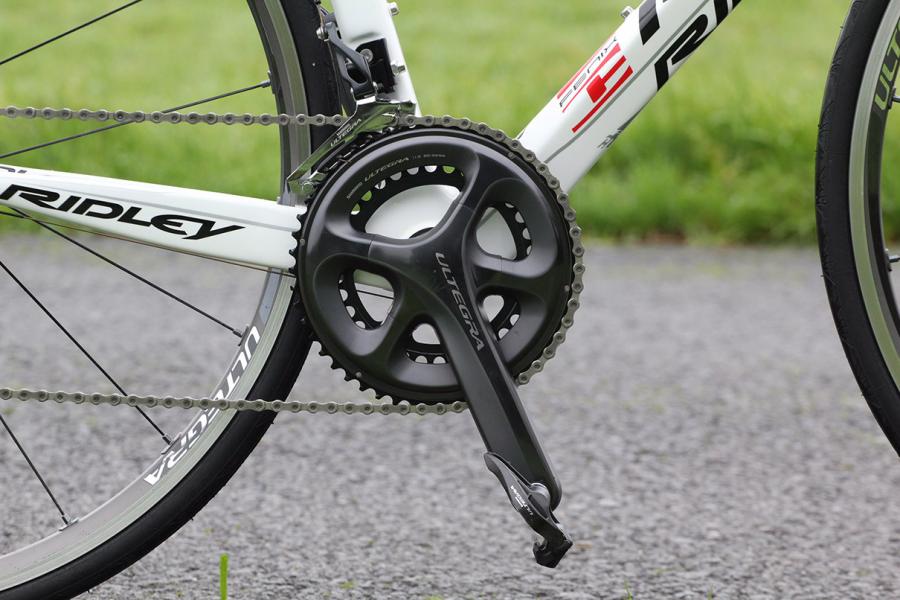 The chainset uses the same four-arm spider as Dura Ace. Instead of being equally spaced they're placed to counteract the forces of pedalling, which aren't constant around the rotation of the pedals. Shimano are continuing to use a hollow outer chainring which adds stiffness to the chainset, and a single spider caters for all chainring combinations from standard to compact and CX. We're running a 50/34 compact and 11-28T cassette on the Fenix. 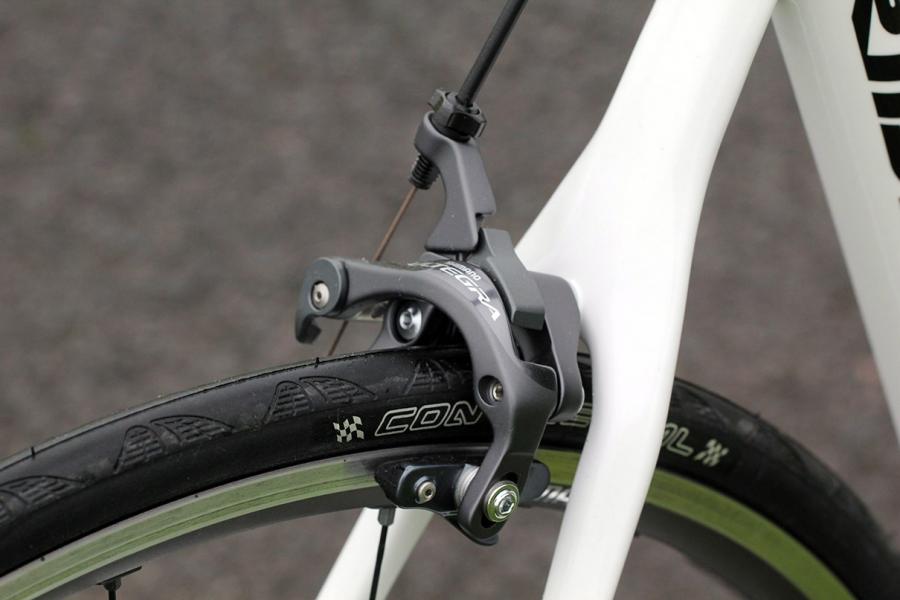 The brakes have undergone a significant redesign too. They're still dual pivot, but they don't use the mounting point as one of the pivots any more; the two pivots are symmetrical either side of the wheel. Polymer-coated cables reduce friction and increase the amount of power for a given force at the lever by up to 10%, according to Shimano. There's also a direct mount version of the brake that does away with the carrier plate and mounting bolt, and simply bolts to either side of the frame or fork. That's something we're seeing used in the under-bottom-bracket position but Shimano are working with frame manufacturers to roll is out on seatstays and forks too. The bike is also sporting Ultegra WH-6800 wheels, which again are heavily influenced by Dura Ace. They have a wide flange design, asymmetric rim profile at the rear, simple bearing adjustment and tubeless compatibility. They weigh a claimed 1,640g a pair.

Enough talk already. Time to get the Fenix – and new Ultegra – out on the road and see how they perform. Stay tuned for a review soon.