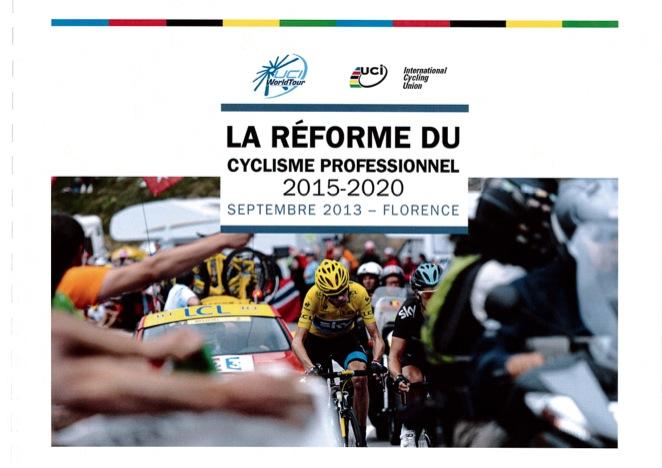 A cut to the number of teams competing in Grand Tours and the de facto end of wild card entries, plus changes to which teams can ride the classics, and how teams pick their races are amongst the detailed changes to the men's professinal road racing calendar contained in a leaked UCI document.

The document apparently originating within the UCI gives further clues of the changes set to transform the structure and calendar of the top level of men’s professional road cycling over the remainder of the decade.

The changes were approved in Florence in September by the UCI Management Committee and the Professional Cycling Council (PCC), and were the subject of a brief article in the October 2013 issue of the UCI’s Sport and Technical bulletin.

As we said at the time, that article left a number of issues unclear with regard to how the proposed reform, which among other things will see a first division of 16 teams and a second division of eight teams, would work in practice.

The document, in French and with the UCI and the UCI World Tour logos is called La Réforme du Cyclisme Professional 2015-2020 [The Reform of Professional Cycling 2015-2020] and dated Florence, September 2013.

Believed to summarise the reforms approved by the UCI Management Committee and the PCC, it was published on Tuesday on the website of Italy’s Lega del Ciclismo Professionistico, set up in 2010 by, among others, Androni Giocattoli team manager Gianni Savio.

Among other things, it sets out the timetable for reform based on the results of last year's Stakeholder Consultation by the UCI, although the origins of the new regime date back to meetings held in late 2011 and early 2012 .

Amendments to existing UCI regulations to put the changes into effect are due to be approved by mid-January 2014 by the UCI's Management Committee and the PCC.

The new structure of the sport and the calendar will be phased in from 2015 to 2020.

Our article last month gives an overview of the proposed changes, but now we have what appears to be the detail, here are the principal features of the reforms that will be introduced between 2015 and 2020, plus some commentary on them.

We already knew that, but the document makes clear that the 1st and 2nd Division teams – plus the racing calendar – is a direct replacement for what is currently the UCI World Tour.

The report also mentions an ‘A’ team – 22 riders racing in 1st and 2nd Division races, as well as Hors Categorie (HC) 3rd Division races – plus a ‘B’ team.

The latter would be a development squad of between 8 and 10 riders, and would only compete in 3rd Division Races (those ranked HC, 1 or 2 according to the UCI’s classification).

That means fewer teams in each of those three races; usually, there are 22 teams, although exceptionally there can be 23 as happened with the Giro in 2011 and again this year.

Each 2nd Division team will race at least one Grand Tour a year.

We don’t yet know who the eight 2nd Division teams are, but the likelihood is that this will restrict the possibility for race organisers to offer wild card places to lower ranked teams from their own country.

Six 2nd Division teams will race in 1st Division one-week races, which will have 22 teams.

The latter would be the only top flight races open to teams outside the top two divisions, but participation is by no means guaranteed.

1st and 2nd Division teams would be able to take part in 3rd Division races, although there's no news on the numbers that would be allowed to participate.

That would mean, for example, that Sky would be able to race in the Tour of Britain - although if it clashed with the Vuelta and the Canadian one-day races (see below) that a 1st Division team must ride, that could prove a problem.

Which 2nd Division races those 1st Division teams will race would be determined at the start of each season largely according to what is described as a draft system, based on their ranking at the end of the previous season.

Priority would be given to 1st Division teams wanting to participate in 2nd Division races taking part in races organised in their own country. After that, the draft system would kick in.

Each 1st Division team will have 37 or 38 days of racing in 2nd Division races each year.

Team rankings will be part of the equation used for promotion and relegation purposes (as will financial, ethical and management factors).

Whether 1st, 2nd or 3rd Division, rankings will be based on results achieved in the team’s own division only; individual rankings, on the other hand, will be based on the rider’s performance across all races.

Gerald Ciolek, for instance, didn’t get any points this year for winning Milan-Sanremo since it is a World Tour race and his team, MTN-Qhubeka, is at Professional Continental level.

Under calendar reform, scheduling conflict between 1st and 2nd Division races – as currently happens even with some UCI World Tour races – will be all but removed.

In 2015 and 2016, Paris-Nice and Tirenno-Adriatico will continue to clash, the only one-week races in the top two tiers that will do so, but from 2017 onwards they will be held on successive weeks, each running Tuesday-Sunday.

That will leave just three weekends in which there will be conflict in the calendar.

Three one-day races will coincide with the Vuelta – the GP Ploay in France, plus the GPs of Quebec and Montreal, while Paris-Tours will take place during the Tour of Beijing.

Those Canadian events are also the only two races in North America at either 1st or 2nd Division level.

Here is how the 1st and 2nd Division calendars will look from 2017 onwards, in date order (the World Championships are categorised separately, but we've shown them under 1st Division here).