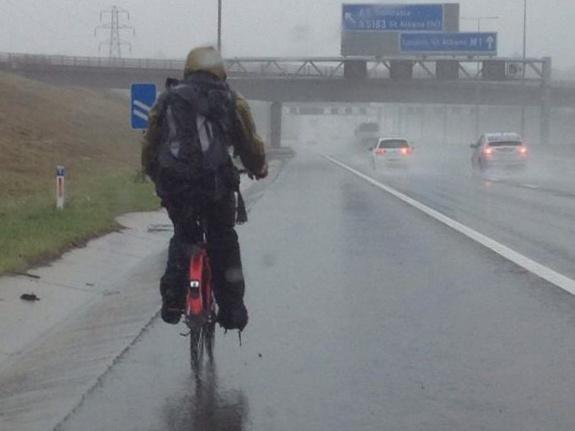 Rider found battling against elements as traffic speeds past
by Simon_MacMichael

Police have told cyclists “don’t be a dummy” after escorting a London-bound rider off the M1 in Hertfordshire today as he rode along the hard shoulder, struggling against the wind and rain and with traffic passing at speed just yards away.

A picture posted to the Twitter account of the Bedfordshire, Cambridgeshire and Hertfordshire Roads Policing Unit was accompanied by the message: “Somebody thought it was ok to cycle to London on the M1, escorted safely off at Redbourn. #dontbeadummy.”

As the photo shows, visibility was poor on the motorway as a result of the rain, but the rider was pressing on against the elements with no rear light on his bike.

A spokesman for Hertfordshire Constabulary told Mail Online: “We were alerted just before midday today of a man travelling southbound on the M1 on a push bike.

“We did a very slow escort off with him at the next junction, which was junction 9 at Redbourne. We gave him words and advice, and I believe he's now getting a train. He was planning to go to London.”

It’s at least the third time a cyclist has strayed onto the M1 this year.

In June, a woman was escorted off the motorway after she was found riding on the hard shoulder between junctions 13 and 14 close to Milton Keynes, Buckinghamshire.

The previous month, Derbyshire Police arrested a man found cycling between junctions 28 and 29 of the motorway after he failed to comply with their instructions.

Cycling on motorways is banned under section 253 of the Highway Code.
Sometimes cyclists do end up on them, whether through an honest mistake or because they deliberately break the law, or are ignorant of it.

Famously, in 2002, a pair of cyclists from Kenya preparing for the Commonwealth Games in Manchester were found training on the M61 in full national kit.

After riding up and down the hard shoulder for the best part of an hour, police escorted them off the motorway, putting the episode down to a “genuine mistake.”