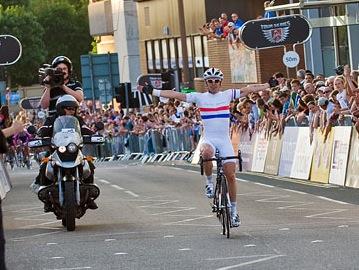 Pro cyclists will be back next June
by Kevin Emery

Woking wll host another stage of The Tour Series next year. Woking Borough Council had announced that the series organisers had included the town on its schedule for next year. And representatives from organisers and promoters of the series, SweetSpot Group Ltd, confirmed the decision in Woking last week.

Woking was one of the 10 towns selected in the UK to host a stage at this year’s event, a 10-round-city centre cycling race series involving 10 teams of five professional cyclists which was won by Team Halfords BikeHut.

The town will host the cyclists on Thursday, June 24 as they race around a track which winds through the town centre.

Iain Reeve, Surrey County Council’s head of transport and chair of the Cycle Woking group commented: “The Tour Series event is a great way of showcasing cycling and encouraging people of all ages and abilities to get on their bikes. This year thousands of people turned out to watch the event, both on the streets of Woking and then on television, and we are keen to capitalise on this success during 2010.”

The Tour Series was hailed a resounding success by organisers, venues and racing teams after attendances were in excess of 100,000 and, thanks to 10 one hour TV shows on ITV4, the event reached an estimated 40 million people in the UK.

Team Manager for Rapha-Condor John Herety commented after the event: “City Centre racing has made a spectacular return to the UK. The new team format had both cyclists and non cyclists hooked to the very last round.

“This series can only get bigger in 2010 and any riders signing for the Rapha Condor team in the coming months for next season will be told The Tour Series will be an extremely high priority for them.”

The race venues reported increased participation in cycling as a whole as well as an impact on their economies. Following round nine in Chester officials believe the crowds boosted the city's economy by around £500,000.

And all partner venues ran school cycling activities on the day of their Tour Series round, engaging thousands of children with the positive benefits of cycling on both their health and the environment.

The event's organisers aim to tour in four more locations next year to make the event bigger and better, and have said that due to the impact the series had on the towns selected this year, more local councils have contacted them to try and host a stage.

They are keen on Tewkesbury being one of the new locations but the town could miss out unless another £20,000 in funding can be found, according to the Borough Council.