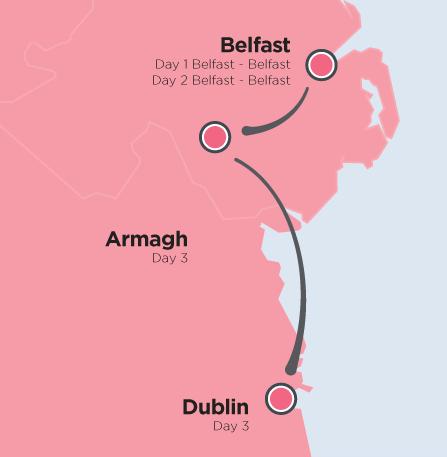 Sinn Féin and SDLP politicians have criticised the routing of the opening stages of next year’s Giro d’Italia which starts in Belfast on Friday, May 9.

The Belfast stage of Italy’s national tour – which is leaving mainland Europe for the first time in its history for the start in Northern Ireland – will not include West Belfast, leading to nationalist calls for the route to be changed, according to Joanne Sweeney in the Belfast Telegraph

The opening stage will be a 22km team time trial starting at Titanic Belfast, then heading down Newtownards Road, Stormont, Queen's Bridge, the Ormeau Road and Stranmillis Road to finish in the centre of Belfast.

"The image of cyclists going up and down the Falls Road would send out a massive positive signal right across the world," he said.

"This is about advertising the city. This is about promoting the city, and nowhere else can do it better than the Falls Road, and I think it's a shame that Deti have excluded west Belfast from this competition.

"What we will see is all other parts of the city being touched and being seen world-wide, except west Belfast, and it is just not good enough. We will campaign to meet whoever we have to meet, to ensure this race comes to this part of the city."

Saturday’s 218km second stage starts on Belfast's Antrim Road and goes to Antrim, Ballymena, Bushmills (where riders are not expected to stop for 1960s-style energy drink), the Giant's Causeway, the Coast Road from Cushendall to Larne on to Whitehead and Carrickfergus and back to Belfast.

The omission of the Mourne Mountains has also attracted criticism, but Darach McQuaid of sports consultancy  ShadeTree Sports told the BBC it was impossible to please everyone.

"We can't bring the race past every front door in every household in Belfast," Mr McQuaid said.

"Or for that matter through Northern Ireland as a whole. There is always going to be somebody who'll say: 'Why is the race not coming past our front door, or through our area."

McQuaid, who is the youngest brother of recently deposed UCI president Pat McQuaid, said that a selling point in bringing the race to Northern Ireland was the spectator-friendliness of the opening stage.

"One of the big sells was how compact Belfast is," he said.

"You could have a stage start at the Titanic building and a finish at city hall and in real terms, people could walk from one to the other. So we did not feel anyone would feel excluded from being able to enjoy the Giro d'Italia from the roadside."

McQuaid said the organisers were responsible for the route.

"They know what they are doing: they know how to find the best race courses. They listen to local opinions, but ultimately it is their say," he said.

The Giro d’Italia route will be officially announced on Monday in Milan. It is understood that Northern Ireland Assembly Enterprise Minister Arlene Foster will attend.