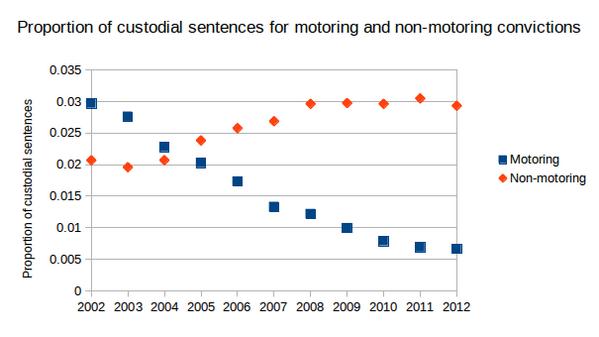 Are courts getting more lenient towards driving offences as they get harder on everything else?

Sentences for motoring offences have dropped over past decade, statistical research shows
by Sarah Barth

The criminal justice system in England and Wales appears to have become more lenient towards motorists over the past decade, while simultaneously handing down harsher sentences for other crimes, initial research by a statistics and traffic psychology expert has found.

Dr Ian Walker, a senior lecturer at the University of Bath, has plotted figures published in the Ministry of Justice’s latest statistics bulletin to show that both in the cases of more serious crimes (as tried in the Crown Court) and magistrate’s court cases, motoring offences have attracted lower sentences over the years, directly opposite to other offences.

In fact more and more crimes are being punished with jail, with the exception of motoring crimes. This graph of more serious offences follows the same pattern: 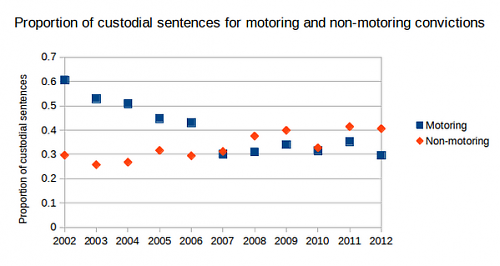 With the caveat that he was keen to do more research into the figures, Dr Walker told road.cc: “It does look as though over the past decade, the legal system (whether the police, CPS and/or courts) have grown more likely to send the people they deal with to prison unless it's a motoring offence, in which case they seem to have grown somewhat less likely to do this.

“The thing we probably need to consider now is what class of offender poses the most risk to society and is most likely to offend again. My gut instinct is that motorists going through the courts might be less likely to mend their ways as a result than those accused of some other offences, but I'd want to see data on that.”

Road safety charities have long campaigned for heavier sentencing in motoring crimes, believing that they attract low sentences that do not act as a deterrent.

Last month the government confirmed it has ordered a review of sentencing in traffic cases where a cyclist or pedestrian is the victim - on the same day a driver who was distracted by his sat nav and killed a cyclist was given a community sentence.

Representatives of British Cycling, CTC and RoadPeace met last year with justice minister Helen Grant to call for thorough investigation and tougher sentencing in cases where a vulnerable road user is the victim.

They also urged that improvements be made to the support provided to the families they leave behind. Also at that meeting was the brother of British Cycling employee, Rob Jefferies, killed on a training ride in Dorset in 2011 by a 17-year-old driver who had passed his test six months earlier and who already had a speeding conviction. He received a non-custodial sentence.

In one of the few potentially positive pieces of news for cycling to emerge from the government’s response to the Get Britain Cycling report published by the All Party Parliamentary Cycling Group, it was confirmed that a review of sentencing in cases involving cyclists and pedestrians will be initiated in the new year.

The review of current sentencing guidelines, which will be accompanied by a consultation, will be carried out by the Sentencing Council, which is an independent non- departmental public body of the Ministry of Justice, and will cover the offences of causing death by careless driving and causing death or serious injury by dangerous driving. Proposals will be subject to a formal consultation.