Bauke Mollema of Belkin got the jump on sprinters including Team Sky's Edvald Boasson Hagen, who finished second, and Lampre-Merida's Maximiliano Richeze, third, to clinch Stage 17 of the Vuelta in Burgos this afternoon. It was a day on which the race exploded into life in the final 20km of the 189km stage from Calahorra, with splits caused by the wind causing a reshuffling of the top 10 in the overall standings.

Safely in the front group though were race leader Vincenzo Nibali of Astana, plus his two closest challengers for the overall, RadioShack-Leopard's Chris Horner and Movistar's Alejandro Valverde.

Today’s stage appeared to be heading towards a predictable bunch sprint finish as the two-man break – Lotto-Belisol’s Adam Hansen, riding his seventh consecutive Grand Tour, and Caja Rural’s Francisco Aramendia – were set to be brought back with a little over 20km remaining. The second of the day's two Category 3 climbs had not long been negotioated, but suddenly the race, ridden at a relatively slow, post-rest day pace, exploded into life as the wind caused echelons to form, the peloton splitting intio three groups. With AG2R-La Mondiale's Domenico Pozzovivo and Thibaud Pinot of FDJ isolated in the third group, Saxo-Tinkoff saw an opportunity for Nicolas Roche to gain time over them on the General Classification, their work rewarded as he gained 1 minute 30 seconds over the pair, putting the Irishman into the top five in the overall standings.

Saxo-Tinkoff DS Fabrizio Guidi reflected: "It was a great stage for us and surprising the field like this is not an easy job, especially because we did the same thing during the Tour.

"It did cost a lot of energy but mentally it was hard for the riders to stay focused and to stay together waiting for the right moment to hit the gas.

"There's reason to be proud and I think our riders will remember this day for a long time. But we're not done trying.

"We will use every opportunity there is to help Nico (Roche) climb the GC.” 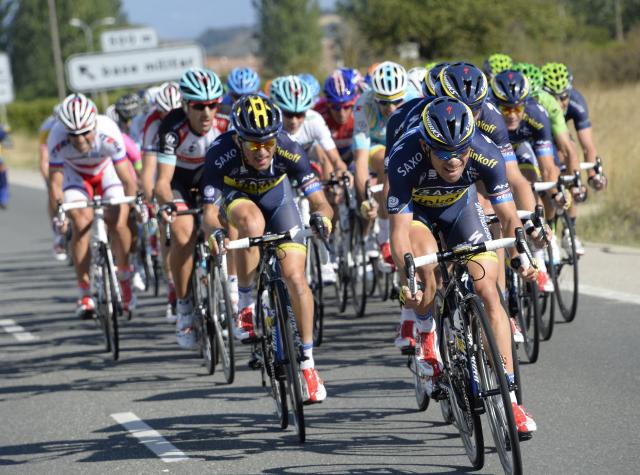 With Garmin-Sharp looking to set up Tyler Farrar, who would finish fourth, it seemed as though the select group at the front would contest the victory, before Mollema spring his surprise inside the closing kilometre and rode away to a convincing victory.

Sixth overall at the Tour de France this year, Mollema failed to emerge as an overall contender in this year's Vuelta, but that will be forgotten this evening as his team, which began the year as Blanco Pro Cycling after long-term sponsor Rabobank pulled out, celebrates its first Grand Tour stage win under its new sponsor Belkin, which came on board just before the Tour de France.

Mollema said afterwards: "I knew this was my chance. All day I thought about an attack in the last kilometre. I knew the peloton would be small after the climb in the final. The crosswinds made up for an even smaller group, so that was nice. Under the red rag the speed went down and I knew that was the moment. I gave everything I had and suffered a lot, but managed to hold on to the line.

"I came here with ambitions for a good GC, but after the first week I felt that it was going to be hard after a heavy Tour de France," added Mollema, who won the points jersey in the 2011 edition of the race.

"From that moment on, I focused on a stage win. It’s fantastic that I’ve have managed to take one,” he added.