Last week we brought you news of the new Cervélo R5 this week the Canadian outfit has announced the launch of two more new bikes - a completely revamped R3 and an all new S3… oh, and along the way they dropped a techno hint on an interesting new development in shifting technology - hydraulic shifters.

We caught up with Damon Rinard, Cervélo's senior engineer on their Advanced Technology Team who talked us round both the new bikes in the video below, as you'd expect when it comes to talking tech he knows his stuff. Rinard and his team designed both the new bikes which trickle down significant amounts of technology and features from the higher reaches of the Cervélo range. 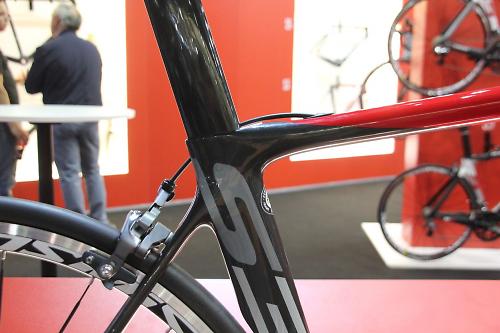 We can be fairly certain hydraulic shifting is on its way though and soon; companies like Cervélo don't just 'future proof' their bikes unless they are pretty certain what the future holds. Who might be making such a system? Our money is on SRAM. They've just launched a lever equipped with a hydraulic reservoir so might as well do more with it. They’ve also got to play catch-up after being left behind by Shimano and Campagnolo on electronic shifting, but they won’t want to appear to be just following the herd. 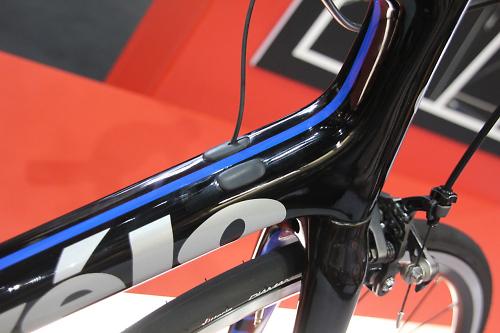 Based on previous attempts at hydraulic shifting, like the Acros system and a mountain bike cable replacement system that appeared briefly in the 90s, we don’t think they’ll need much of a fluid reservoir, so SRAM may be easily able to piggy-back hydraulic shifting on their brakes. Of course Shimano also have a lever with a hydraulic reservoir in it, and it's got growing room plus an electronic management system. Our left field choice would be Magura.

Anyway, back to the bikes, there's more to report from now on Cervélos in the UK will be available as complete bikes and they'll be competitively priced too, very competitively in some cases with a Shimano 105 equipped version of the new R3 available for under two thousand pounds £1999 to be exact, at the other end of the scale you can have it with Ultegra Di2 for £4199, there's also an Ultegra mechanical option at £3099 - the new R3 will also be available as a frameset for £1699. Among the S3 build options is a Shaimano Ultegra Di2 model, like the R3 yours for £4199, there are two Ultegra mechanical versions at £3599 and £3299 repectively. Why the difference in price? Well one of them comes with  Magura hydraulic rim-braked version (yes, we've already put our test request in).

Hot of the presses w've got RRP price info on other Cervelo complete bikes too. At the top of the tree an R5 with Shimano Dura Ace Di2 will cost £6799, it will also be available in mechanical Dura Ace and SRAM Red versions the latter for £5299. The S5 VWD DA Di2 will cost £6999 but you can get an Ultegra mechanical version for £3599. Most expensive model in the range is the P5 Six DA Di2 model at £7499 although you can save two grand by going the mechanicsl Dura Ace route. The new P3 TT/triathlon bike tops out at £4599 with Ultegra Di2 or you can have mechanical Dura Ace or mechanical Ultegra for less money. Final complete bike in the TT/Tri range is the P2 with Shimano 105 for £1999. All models are also available as framesets. 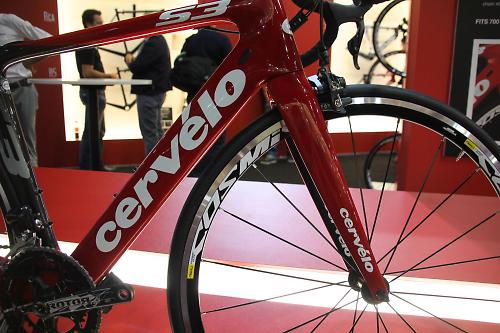 The S3 is a model that returns to the range after the previous version was discontinued following the launch of the S5. Interestingly it seems that one of the reasons the old version of the S3 was dropped was that it was more complicated, and presumably expensive, to build than the model that had superceded it but for less aerodynamic advantage. You can well imagine that would have offended the clear-eyed rationalists at Cervélo.

The new S3 shares much of the S5 design - in the very crudest terms you could think of it as an S5 with an R3 rear end. The bike is designed to deliver the maximum aero advantage without being as unrelentingly stiff as the S5, the extra pay-off is that it also drops a bit of weight over the competition.

While the S3 might not be quite as aero-optimised as the S5, Damon was keen to point out that it was still right up there. In fact, he said it was more aero than many other range-topping aero bikes. It's only fair to point out here that while Rinard's equivalent at Felt acknowledged to us that the S5 was the most aero aero bike at 0° their new AR was more aero from any other angle. I digress, but it illustrates the competitiveness among aero bike makers. 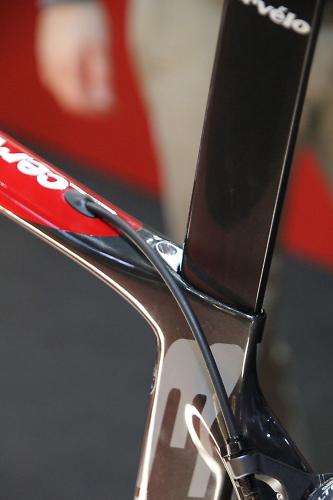 Target customer for the new S3 is the privateer racer who wants the benefits of the S5 but without the price tag. The provisional UK prices we saw looked competitive; we’ll bring you confirmed costs when we have them. Like all of its stablemates from now on those prices will be for complete bikes in a variety of group set options. Cervélo is now part of the Derby Group so will benefit from significant economies of scale when it comes to buying components.

What wheels will Cervélo spec on its complete bikes? I'm glad you asked. Cervélo has taken the sensible decision not to try and second guess their customers' wheel needs.  “No matter what we put on them it would be wrong for someone." an insider told us. Instead, Cervélo bikes will come with a set of high quality training wheels and the buyer can then decide what race wheels work best for his or her needs.

According to  Cervélo's UK manager, Chris Needs, most prospective Cervélo owners are likely to have decided views on wheels and probably already own a set of their preferred best wheels. That's certainly likely to hold true of the S3’s target customer. 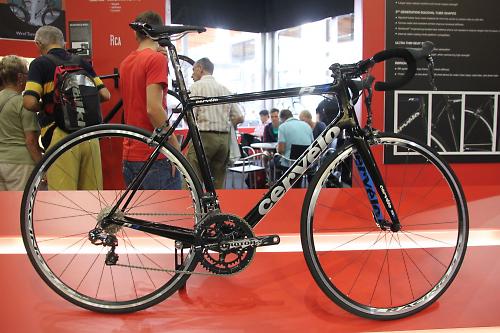 Cervélo's mission is, they say, to make you go faster and they give you a choice of how you want to achieve that you can either take the aero route with their S bikes or the light route with their R bikes. Often characterised as 'climber's bikes' the R series bikes and the R3 in particular have an impressive record of wins on all sorts of terrain - Johan Van Summeren won Paris Roubaix on one as recently as 2011.

The new version of the R3 gets the latest version of Cervélo's squoval tube shapes, as used on the R5 and the RCA, which give an aero advantage over the old tube shapes. Here's Damon with all the details of the R3: