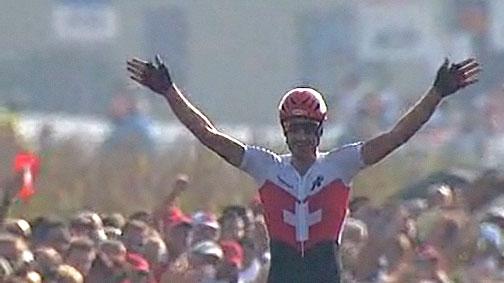 Swiss rocket shows his class on home turf, Wiggo gets the gremlins
by dave atkinson

There was plenty of jostling for the minor podium places in the men's time trial at the World Championships today, but at the head of the field it was all about Fabian Cancellara. Right from the off he looked quicker and more committed than the rest of the field and his margin of victory only underlined the gap in class.

Britain's Bradley Wiggins had a bad day at the office: he dug deep for three laps to keep himself in with a chance of a podium place but on the final climb he had trouble with his transmission and wasn't able to change back up into the big ring. He threw his bike down in disgust and looked to have abandoned with a few kilometres to go; in the end he cruised in on a spare bike, finishing in 21st place.

Unfavoured American Tom Zirbel was the early pacesetter, and in fact his time wasn't troubled at all until the big guns were out on course three hours after he posted his time – he was eventually edged out into fourth place. Cancellara took a couple of seconds out of everyone as he sprang from the starting gate, taking the first corner at a frightening pace, and by the time he crested the climb for the first time he was already 18 seconds ahead of the field, and a full half minute in front of Wiggins. Bert Grabsch, Gustav Larsson,Tony Martin and Marco Pinotti were also well in contention, but only really for the other podium places: Cancellara looked composed and his speed on the road was phenomenal.

At the end of the first lap the Swiss had a 38 second advantage and was looking to pick up Larsson, his minute man; a few kilometres into the second lap he passed the Swede and set his sights on Wiggins, a further minute down the road. Larsson busied himself with trying to stick to Cancellara's wheel: even with a minute deficit Larsson was a medal prospect, and Cancellara helped the his pursuer by overcooking a couple of tight turns.

By the halfway point Cancellara, who had seen off Larsson, was over a minute up on the field, and it wasn't long before he swept past Wiggins who was running in sixth at the time. Cancellara didn't even look out of breath at the bell as he checked the scoreboard to confirm his advantage: over a minute and a half over everybody. He never looked in any danger of having misjudged the circuit and looked to have plenty in reserve as he powered up the climb for the final time with Tony Martin in his sights. He kept his pace and his style intact on the run in, and even with a grandstand finish, coasting in with his arms aloft to receive the applause of his home crowd, he was still 1:27 ahead of Gustav Larsson and two and a half minutes in front of third-placed Tony Martin.