Ridgeback to make Flight Ti for 2010

The run will be strictly limited... the price won't be
by dave atkinson

Speak to most people in the UK bike industry and they'll say that they haven't been that badly affected by the recession, and one thing we've noticed is that many bike brands are reporting that the high-end machines have been flying off the shelves. Obviously someone out there has still got disposable income - maybe because they've sold their cars, or they're pulling in a tidy bonus for not losing too many billions. Anyway, given that fact it's not too much of a surprise to learn that Ridgeback are going ahead with the Ti-framed version of their Flight urban bike. 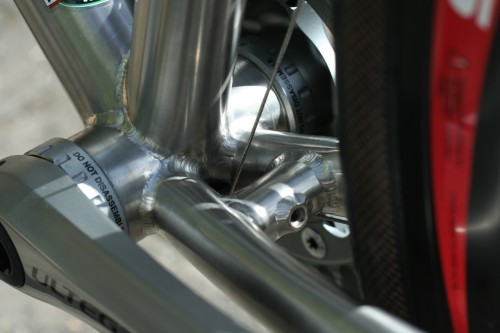 And what a beauty it is. We first saw the Flight Ti at Icebike earlier in the year but it's now a reality. The heart of the bike is a 3Al/2.5V round-tubed frame with geometry in line with the rest of the Flight range. Obviously you get the standard brushed Ti treatment and minimal decals. Hung from the frame is a new Ultegra 6700 groupset controlled by Shimano's 10-speed rapidfire triggers. We're a bit undecided here at road.cc about the finish on the new Ultegra kit – the colour, not the quality – but it certainly complements a Ti frame quite nicely. Maybe that was the idea. 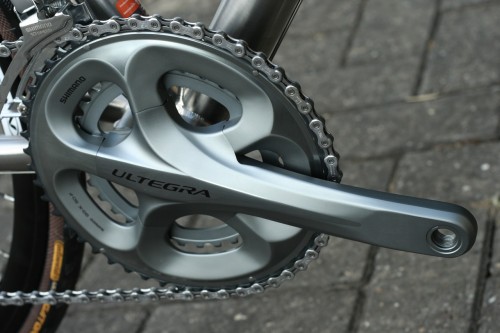 Wheels sport semi-deep section Alex R475 rims, and the disc hubs have 160mm rotors. Deore hydraulic discs take care of stopping duties. The Titanium isn't restricted to the frame, either: the seatpost and the bars are both Ti too. The overall look is very classy: we liked it the first time we saw it and now it's wearing 6700 kit we like it even more. And how deep will your pockets need to be to commute in this kind of style? Well, you're looking at about £2,300, which is a fair bit more than the top-end Carbon commuters from the likes of Trek and Specialized but compares pretty favourably to an Ultegra-specced Ti road machine.

Exactly how many Flight Ti bikes there will be we're not sure. It may well be as few as 25, and we're sure that Ridgeback will shift them...