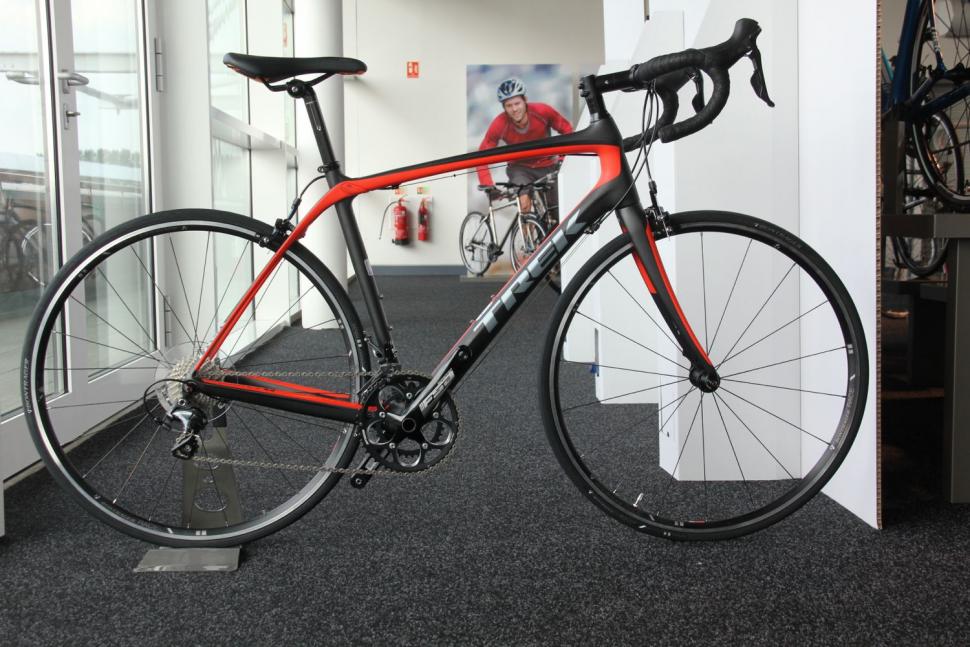 Trek are currently holding their Trek World 2014 product launch at Silverstone and we’ve been along to check out the highlights, including a new entry-level road frame and increased customisation options.

As previously, the 1 Series frame, which is used across the three different models, is made from Trek’s 100 Series Alpha Aluminium, but it has been redesigned. The down tube, for example, now comes with a curved leading edge and a truncated tail. In other words, it’s chopped off square at the back in a similar way to the KVF tubing that Trek use on their Madone and Speed Concept bikes. The 1 Series tube isn’t technically KVF but Trek say that it does improve the aerodynamics.

The 1 Series frame is still built to Trek’s H2 geometry, which is sporty but with a taller front end than with their H1 fit, and they still come with mudguard and rack mounts that make a lot of sense. Many of these bikes are going to be used for commuting.

Trek now use carbon forks across the entire 1 Series, including the £600 1.1. This bike comes with shifters and mechs from Shimano’s Claris 8-speed range with the rest of the groupset coming from other manufacturers. The chainset, for example, is a compact Vuelta Corsa.

Let’s jump much higher in the range next… The 4 Series Madones and Domanes are made from Trek’s 400 Series OCLV (optimum compaction low void, if you’re interested) carbon fibre and these have been added to Trek’s Project One programme for 2014.

Project One allows you to customise your bike, and this is something that Trek believe is going to become ever more popular over future years. Essentially, you can pick the model and the fit that you want, then you style it and spec it according to your taste and budget.

So, you can pick the colour/design, including the colour of the logos for 2014, add your name, choose your drivetrain (options from Shimano, SRAM and Campagnolo), select your wheels, bars, saddle, and so on.

Previously, Project One only covered the very high-end frames. 4 Series Madones and Domanes aren’t cheap, the standard models starting at about £2,000, but Project One is now open to a larger range of options than before.

The 4 Series Madones are essentially very similar to the 5 Series ones, by the way, but with a standard seatpost rather than a seat mast and standard brakes (the 5-Series has Bontrager Speed Limited integrated brakes, the rear one mounted behind the bottom bracket).

The 2-Series aluminium Domane has been redesigned. We recently reviewed the 2.3, the key feature of which is the IsoSpeed Decoupler that allows the seat tube to move independently of the top tube and seatstays to provide more comfort. We mentioned the weld on the seat tube that helped allow that movement. Now Trek have removed that weld, believing it is not necessary. They use a double wall there – effectively a tube within a tube – and it’s a far neater look.

The most affordable Domane is still the 2.0 (pictured) at £1,000, with the same spec as last year. Trek are actually moving away from model years now. Rather than launching new bikes into a particular model year and then updating them in subsequent years, they’ll be launching new bikes whenever they’re ready to go and upgrading as and when new tech and/or components become available.

Sticking with the Domane, this is a version of the bike in a Pro fit, with a shorter head tube and more aggressive ride position than you get with even Trek’s H1 fit. As you can see, it’s in RadioShack team colours with details of the Paris-Roubaix pavé on the top tube.

The price has yet to be announced but expect it to be upwards of £8,000.

As you can see, this bike is equipped with Shimano Dura-Ace Di2 shifting. From now on, all of Trek’s Di2 bikes will have the battery inside the seat post rather than positioned externally.

Over on the cyclocross side of things, Trek have three new aluminium race bikes in their Crockett range. They’re all built around basically the same 200 Series Alpha Aluminium frame with a tapered head tube (1 1/8in to 1 1/2in) and a BB86.5 bottom bracket.

The top-of-the-range model is the Crockett 7 which comes in both disc brake (£2,000) and cantilever brake (£1,750) options. The disc version comes with SRAM S 700 hydraulic brakes operating on 160mm rotors. Rather than being Red or Force 22, the levers are 10-speed operating SRAM Rival mechs, while the wheels are from in-house brand Bontrager.

The canti version is the same except it has SRAM Rival shifters and Avid Shorty 6 brakes.

The other model is the Crockett 5 and that comes in a disc only version at £1,400. Again it’s race-ready with Avid’s BB5 mechanical disc brakes and a mixed groupset based around Shimano 105 shifters and mechs.

The Crossrip bikes fall within the cyclocross category but they’re really road-going bikes designed to handle rough ’n’ tough urban riding, which is why they get a less race-focused geometry and mounts for both mudguards and racks.

Each of the two Crossrip bikes has a frame made from Trek’s 100 Series Alpha Aluminium and carbon disc fork with lowrider mounts. The £1,000 Elite has Shimano’s Sora shifters and brakes and Hayes CX 5 mechanical disc brakes while the £875 Comp has Shimano Claris and Avid BB5s. Both get Bontrager’s puncture-resistant Hard-Case tyres and a Bonty Race Lite IsoZone bar to help dampen vibration.

Trek do a large range of women’s bikes covering pretty much every aspect of cycling. The £550 Lexa looks pretty cool to us in this matt Leopard Blue (don’t say it looks like Bianchi Celeste, Trek are touchy about that – this is their own colour that has come via the race team).

The straight Lexa (without a suffix) is the entry-level model. The frame is 100 Series Alpha Aluminium built to a women’s specific H3 fit. In other words, it’s not simply a standard (men’s) model shrunk down. The shifters and mechs are Shimano Claris although, like many brands at the lower price points, Trek really mix up the rest of the groupset components, and that’s a women’s specific saddle on there.

The Lexa SLX is another neat looking women’s bike. The frame features an IsoSpeed Decoupler (see above) that Trek use on their Domane bikes to add comfort, and the geometry is designed for endurance riding. Your £1,200 gets you a Shimano 105/Tiagra groupset including a compact chainset, and 25mm puncture-resistant tyres on the Bonty rims.

There are a couple more Lexa bikes too and both the Madones and the Domanes are available in women’s specific designs – WSD. The women’s market has increased significantly for Trek in the last year and they’re hoping to grow it even more in the future.

One of Trek’s biggest selling models is the 7.2 recreation bike (£425) and this is the WSD model.

See that head badge? It’s reflective. Trek are also using a Seeglass coating on some of their FX models to catch the light. It’s crushed glass and it shines in headlights, for example. It could be that Trek extend this onto other models in future. 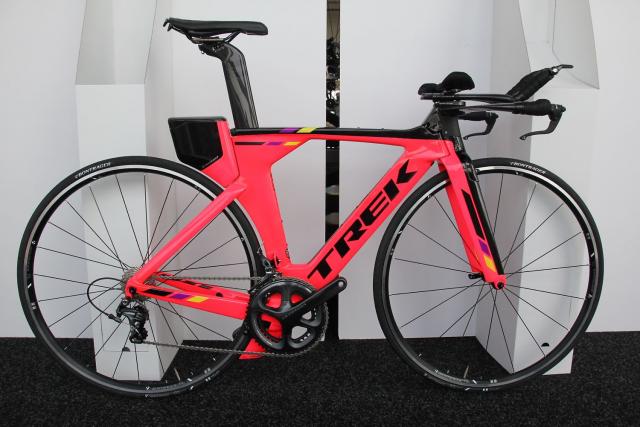 We told you about Trek’s redesigned Speed Concept earlier in the week so flick back to that story for all the info. 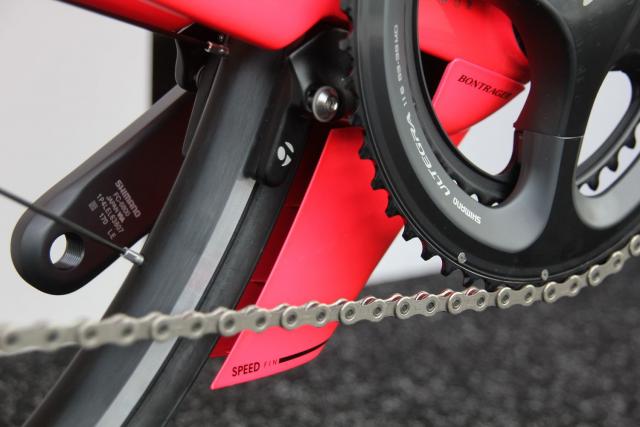 Check out the Speed Fin that manages the airflow over the rear brake and the leading edge of the rear wheel down below the bottom bracket. 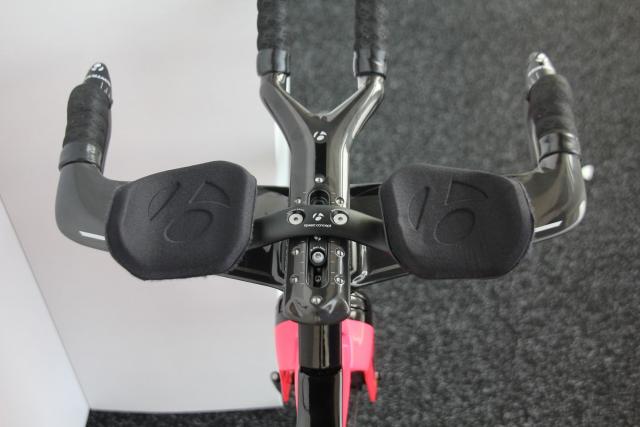 And what do you think of these wishbone style aero bar extensions? They come in four different widths.

Trek say that the new Speed Concept is way easier to set up and adjust than before with much better storage integration for fuel and so on.

Trek World is open to the public this Saturday.