Trek may have launched the next generation version of the Madone 7 Series yesterday, but their main GC contender at the Tour, Andy Schleck won't be riding it - he's on a Domane 6 Series than you very much.

We spotted Schleck's Tour bike racked up amongst a bevy of Leopard Blue Next Genartion Madone's ahead of the race's start in Porto Vecchio last week. His spare bike is a Domane too - logically enough. A Leopard Trek mechanic confirmed that it was indeed the bike eh would be riding for the race. In fact Schleck has been riding the Domane since starting his comeback from  breaking his sacrum in a crash at last year's Dauphine. The Luxemburger is said to favour the Domane's more relaxed geometry and more comfortable ride over the Madone even in the latter's new 25g lighter Next Generation incarnation.

Apparently Schleck feels that the combination of the ride feel and the way the bike handles gives him more confidence - something that has been sadly lacking for the Luxemburger more or less since Leopard Trek  merged with the Radioshack team managed by Johann Bruyneel at the back end of 2011. Schleck has endured a wretched comeback from that Dauphine crash either failing to finish or finishing well down the listings, and although crashing is an everyday part of cycle sport that doesn't mean that all riders are psychologically crash-proof. So, if Andy's confidence needs boosting what is it about the Domane that's likely to do it. Well, to be frank (oops, sorry) that new paint job is only going to confuse the lad (like the rest of us) about which team he's riding for possibly in his case stirring up unwelcome memories of recent team managers. Colour aside though the Domane does have a lot going for it. 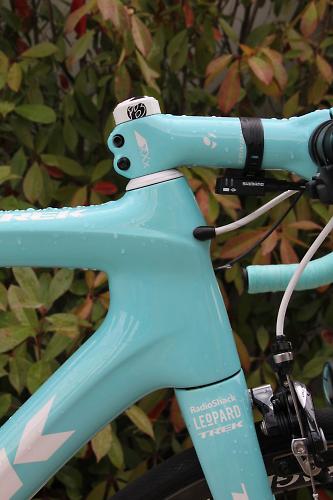 For starters that IsoSpeed decoupler really does work to smooth out imperfections and worse in the road surface - and believe us that will come in handy on occasion in Corsica - making for a more stable ride. Stability is enhanced still further by a longer wheelbase than the Madone and a slightly lower bottom bracket. The top tube is shorter and the head tube slightly taller than the Madone - something Schleck counters by running a negative rise stem - but even so the overall effect is a less extreme position on the bike. Like a lot of other teams Leopard Trek have largely gone for 25mm tyres and that's what Schleck has on his Bontrager Aeolus 3s too. There's one other thing about the Domane that is bound to inspire confidence in any bike rider… it's a winner. Fabian Cancellara has been winning races on it since before it was officially launched. The Domane is Spartacus's bike of choice too, and whisper it not but the Domane 6 Series has chalked up more big race victories than the racier Madone 7 Series. So maybe not such an odd choice after all.