While the racers were busy tackling the third stage individual time trial in the Tour of Belgium last Friday, I had a good look around the team buses trying to spot anything interesting. While Jos Van Emden and Lars Boom were warming up for the time trial on their turbo trainers, I had a closer look at their chosen race bikes for this stage race. Giant have a long association with Blanco (previously Rabobank) with the team fundamental in providing product feedback. For road stages, the team have the choice of the TCR Advanced SL or the brand new Propel, and that choice does appear to be down to rider preference. Giant’s first aero road bike, the Propel, entered the company’s range at the beginning of the year and it has been a regular sight at the races. We had a close look at it during the Tour of Belgium last week, while the owner of this bike, Jos Van Emden, was out on the third stage individual time trial. Aero is the latest buzzword in the cycling industry currently, and most manufacturers now have an aero road bike. Giant took their time to bring theirs to market, and they do so with claims that it’s faster in testing than every other aero road bike on the market. That’s bold stuff. 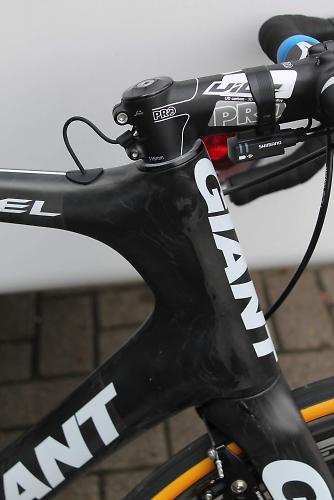 They used Computational Fluid Dynamics (CFD) and wind tunnel tests to shape and validate the Propel’s tube shaping. The down tube is a teardrop shape with an flattened trailing edge halfway down at the point where the bottle cage mounts. The seat tube is teardrop shaped too and wraps closely around the rear wheel. It’s an integrated design, the saddle clamping to a special mount on top. 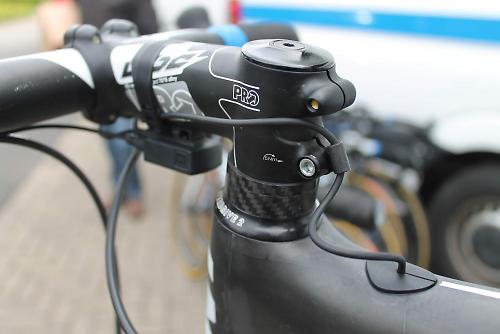 As with most modern road bikes, the cables are all routed internally. It’s been specifically designed with electric groupsets in mind, in this case the Shimano Di2 wiring pops through the top tube just behind the stem. The Blanco mechanics have devised a nifty little loop that fixes to the lower stem steerer bolt, just to keep the wiring from rattling about. The rear brake cable goes through the top tube. 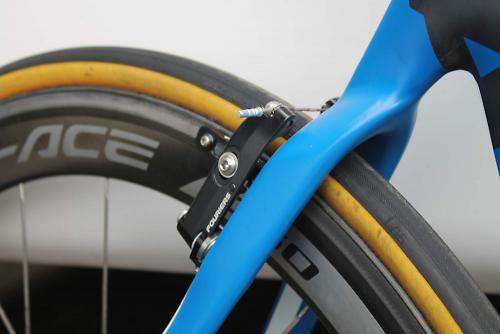 The brakes are interesting. To reduce drag they’ve designed the frame around integrated mini-V brakes rather than traditional calipers. They’re placed at the rear of the fork and in the usual location on the seatstays. Giant have produced their own SpeedControl SLR carbon composite brakes, but here the bike (and the other Propel bikes used by other team riders) had Fourier V-brakes fitted. 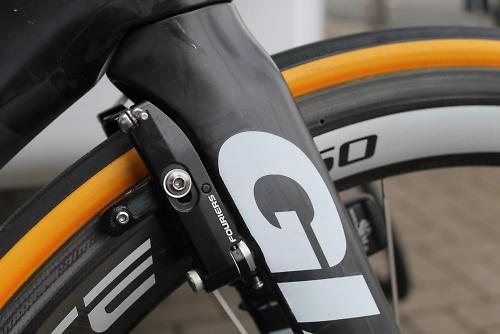 Fourier is a small Swiss company that specialises in brakes and other components like bars and stems. The Blanco team have used Fourier brakes quite a lot, most noticeably on their time trial and cyclo-cross bikes. The brake pictured here isn’t anything that currently features on the company’s website.

There are features carried over from the TCR: the OverDrive 1 1/4-to-1 1/2in tapered head tube with larger top bearing diameter, the PowerCore 88mm wide PressFit bottom bracket and a Duotap-esque RideSense wireless speed sensor incorporated into the non-driveside chainstay. Geometry is also carried over from the TCR, making it easy for riders to swap between bikes. 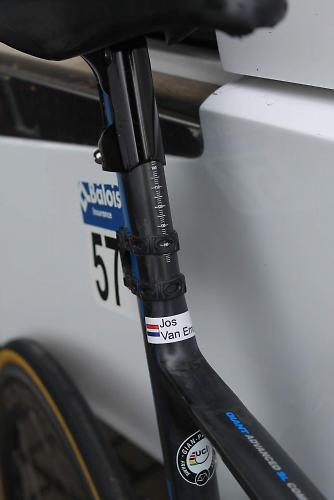 Jos Van Emden, a Dutch-born cyclists, has been with the Rabobank team since his second year as a professional in 2006 and has stayed with Blanco. His bike is decked out with Shimano’s new Dura-Ace 9070 Di2 and he’s using an SRM Powermeter with the older cranks and chainrings. SRM have only just released a version of their power meter that works with the four-arm spider and chainrings of the latest groupset. His contact points are a PRO Vibe 7S handlebar with an anatomical bend and a 116mm custom stem, fitted with absolutely no spacers. Unlike Boom, he races with an SRM Powermeter. His saddle is an interesting choice, a San Marco Regal that has been recovered and carries no identifying branding. You can clearly make out the rivets at the rear of the saddle. We’ve seen racers in the past (such as Tom Boonen) race recovered Regale saddles; it’s a popular shape with many of the peloton. These days there’s more availability from large saddle brands so we’re seeing most riders stay on brand. Interestingly, Lars Boom was racing the TCR Advanced SL, so clearly there’s no pressure from Giant to race the new aero road bike. As well as being aero, Giant designed the Propel to be as light and stiff as their TCR Advanced SL, and one that has done service for several years now. 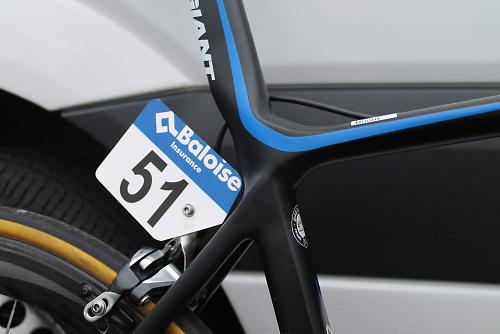 With all the aero benefits and few obvious compromises, it’s easy to imagine the Propel forcing Giant to consider the place of the TCR in the range in the future. So it’s perhaps a little odd that the rest of the team aren’t also on the new bike. 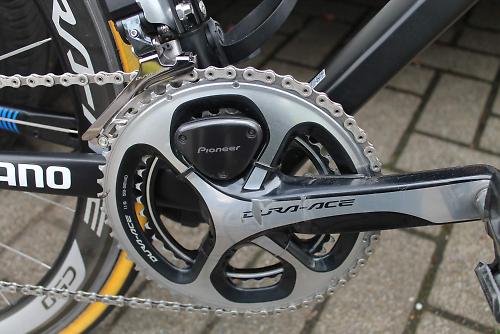 Blanco are sponsored by Shimano and that means the latest Dura-Ace 9070 Di2 groupset, which looks rather battered and is showing plenty of wear and tear. There’s evidence of the high mileage with two horizontal wear marks on the crank arms - part of Boom’s shoe clearly rubbing on the cranks. There’s also plenty of wear on the chainstays, suggesting Boom has a heel-in pedalling style. For the latter Boom has a custom 115m stem and opts for a spacer beneath it to lift the height of the bars a little. And for the handlebars he chooses an anatomic bend-design. His saddle preference is for a Fizik Antares. The team race on Vittoria tyres, in this case Corsa Evo 25mm items. 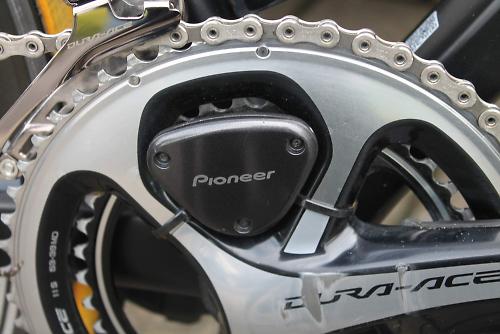 And now the intriguing Pioneer power meter fitted to Boom’s bike, and the bikes of most of the his teammates. That’s Pioneer the company well known for making hi-fi equipment and record decks. Yes, they’re getting into the cycling market. Pioneer describe the move as “part of its activities towards opening up new horizons for innovation in people's lives and culture” and they know a thing or two about electronics. The power measuring market is an expanding one and there’s room for new entrants into the market we reckon especially if it’s the right price. There’s more to come from Pioneer it would appear. This is just the start. 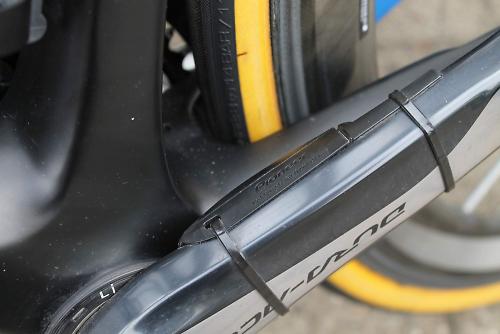 Pioneer are actually sponsoring the Blanco team and they’ve been using the SGX-CA900 Athlete Cyclocomputer and SGY-PM900 Pedalling Monitor Sensor throughout the season. The system comprises two strain sensors individually attached to the inner face of the crank arms. A wireless transmitter is mounted to the cranks to relay the data, via Ant+, to the head unit. The zip ties are far from the tidiest solution, but it’s hard to see how Pioneer could get around this unless they modified cranks, which would incur a cost premium.

The weight of the three modules is a claimed 70g, so you’re not adding much weight to the bike at all. A CR2032 battery powers the sensor and provides somewhere in the region of 200 hours of operating time. The head unit has a 2.2 inch QVGA colour LCD touchscreen that uses a similar mount to the SRM device. It also boasts GPS so it can provide similar routing facilities to the Garmin Edge 800-series. There’s also a barometer and thermometer for elevation data. A Li-ion battery is charged through a mini-USB port and the battery life is a claimed 12-hours. Pioneer have developed their own set of online tools for analysing, tracking and sharing training rides. It’s not yet clear if it will be compatible with Strava and other training websites. 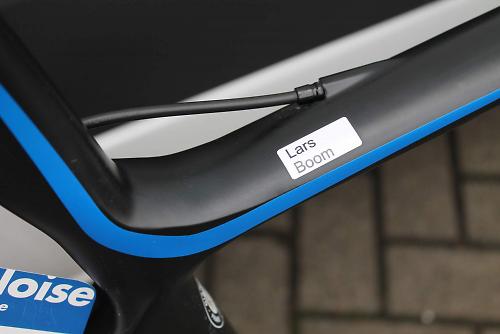 27-year-old Lars Boom is a hugely successful cyclo-cross racer, winning the Dutch national cyclo-cross championships on six occasions, most recently in 2012. In recent years he’s been striking out into the road ranks and won this race, the Tour of Belgium, in 2009. He also won a stage of the Vuelta in the same year.

He’s spent his whole career with the Rabobank outfit, working up through from the junior development squad to the pro team. Rabobank pulled their sponsorship at the end of last year and the team has continued racing under the Blanco moniker while they search for a new title sponsor.