As Tony Martin stormed to victory in the third stage 15km time trial of the Tour of Belgium on rain-soaked roads, I was lurking around the team buses star spotting and taking a closer look at the time trial bikes. At this time of year, most manufacturers are saving new product launches for the Tour de France, so it was little surprise that we spotted nothing earth shatteringly new, but there was still plenty of interesting stuff. So here's a closer look at the bikes form Giant, Specialized, Bianchi, Merckx, Trek, Look, BMC and more...

The Tour of Belgium has, for a race that boasts a heavyweight roster including Tom Boonen, Philippe Gilbert, Fabian Cancellara. André Greipel and many more, an unusually low key atmosphere. This surprising laid back approach was no better displayed in the unrivalled access the public were allowed to the car park that contained the dozens of team buses and the riders warming up before their time trial slot. It's good for fans seeking autographs as it is for journalists photographing the bikes and equipment. Fabian Cancellara was racing, but I only spotted him in the team car as he was being ferrierd to the team bus before the start. He was keeping a low profile. The Trek Speed Concept has been with us for a couple of years and is a proven winner. It uses frame tubes with a Kammtail Virtual Foil shape. The trailing edge has been chopped off but the air is tricked into performing as if there was a trailing edge, with the resulting reduction in weight the significant benefit. Bontrager have pushed the development of their wheels in the past few years, but they don't yet produce a disc. So the team have painted a Zipp disc in team colours. You can clearly make out the dimples, an aero feature the company is well known for, and the Zipp logs around the hub. 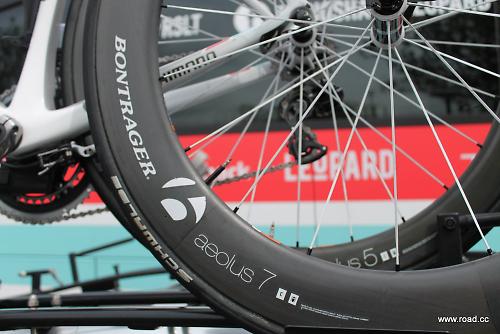 Here's the wheel they ran up front, an Aeolus 7. 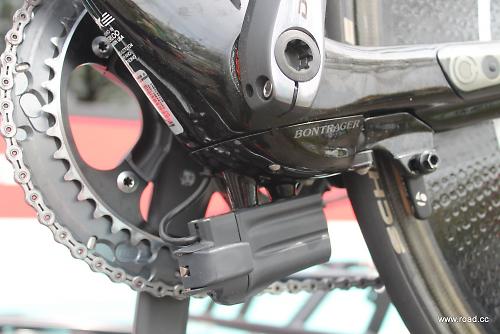 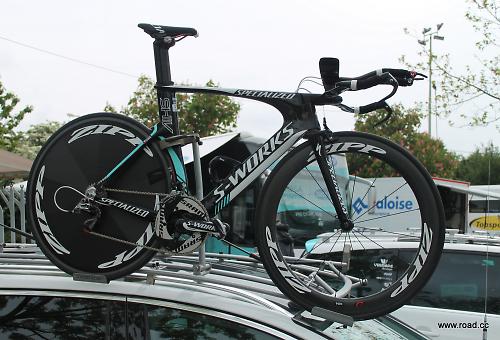 The Trek uses a bayonet hinge-style steering mechanism, while the Specialized Shiv here as a regular steerer tube setup. The Shiv, as most will remember, had a troubled birth with the UCI banning the nose cone that the frame first debuted with. It was removed in the redesign the following year. Unlike the integrated front brake of the Trek, Specialized opt for a regular brake caliper. There's different schools of thought on the aerodynamic impact of a brake caliper mounted on the front of the fork, and we see a split with manufacturers going with one theory or the other. Meanwhile, Specialized have integrated the rear brake into the frame, in the bottom bracket/chainstay location. 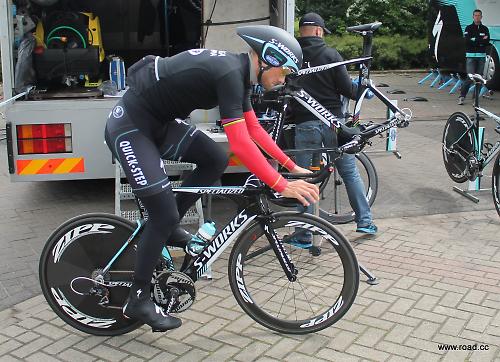 Tom Boonen was drawing a large crowd, as you would expect of a national sporting icon. He didn't look too happy with something on his Shiv after a sighting lap of the time trial course. We couldn't quite overhear what he muttered to the mechanic as he got off the bike and made a beeline for the privacy of the team bus, but the mechanic whisked the bike away and put it to one side for inspection. He went on to finish a respectable 8th. 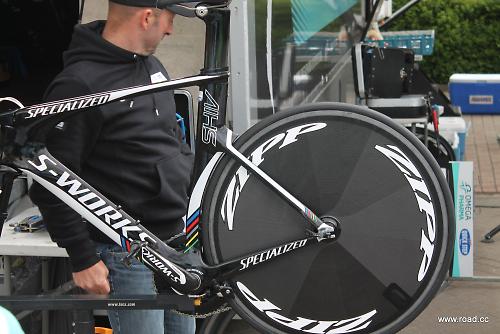 Nearly all riders chose a disc rear wheel and regular deep-section front wheel, such as the setup here. The conditions on this day were typically Belgian; cold, grey, raining and windy. The wind wasn't too strong, a little blustery, but clearly not enough to induce instability in a disc setup. Spot the world championship stripes, this is Tony Martin's bike. The mechanic was spending a lot of time preparing it. The regular Shiv's just had single colour stripes. 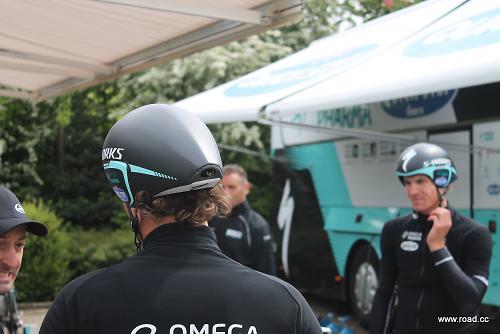 Regular long point time trial helmets for most teams, but Quick Step were using Specialized's McLaren designed lid, which has a shorter design and a cut tail, with an exhaust port at the rear. Break out the big chainrings, 54t was a popular choice but we did see bigger, this 58t bike on Martin's spare bike. So big that SRAM don't produce one, so they've had to go to FSA for it, and because it's not on brand, they've attempted to remove any identifying cues. 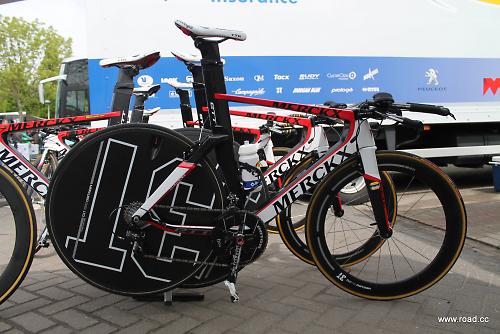 The Merckx ETT is an interesting bike. It launched just before the London 2012 Olympics, we were there there with Eddy Merckx when they whipped the covers off. It's interesting because the downtube has three horizontal slots that allow air to flow. They call it the 'Venturi Powerbox'. The downtube has three slots that funnels air through. As the air passes through the slots, it speeds up in direct proportion to the reduction in area. The result is a reduction in drag and buffeting so Merckx claim. 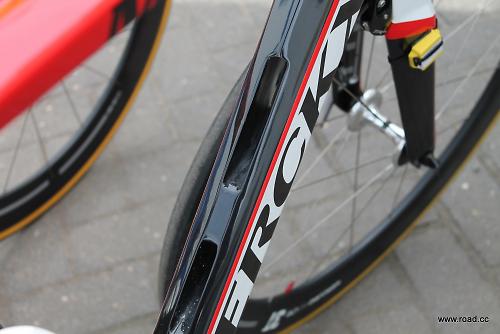 They presented it to the UCI and they rubber stamped it, and immediately amended their rulebook. Merckx were given an exception to keep the bike, but only for the life of this model, they can't use it in future designs - which rather suggests it works - shame the UCI have decided to deny everyone else the benefit. 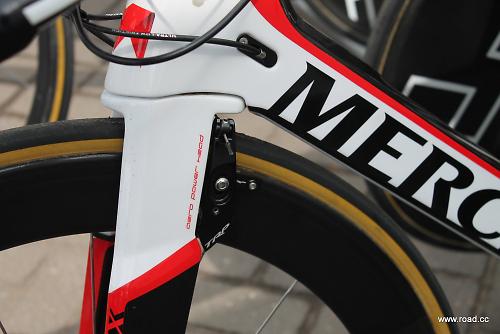 Like several other time trial frames, the ETT has integrated brakes, moulding seamlessly into the rear of the fork and the seat stays. Handlebar setup varies a lot with personal preferences showing through in the many different approaches. Theories about the ideal time trial position are constantly changing and it's clear some riders spend a jolly good deal of time in the windtunnel perfecting their positions, while some just go with whatever setup they're given. 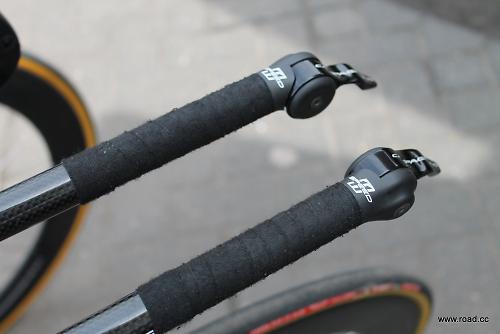 This rider had some soft grippy tape wrapped around the extensions to provide extra purchase when the hands get sweaty and covered in snot. 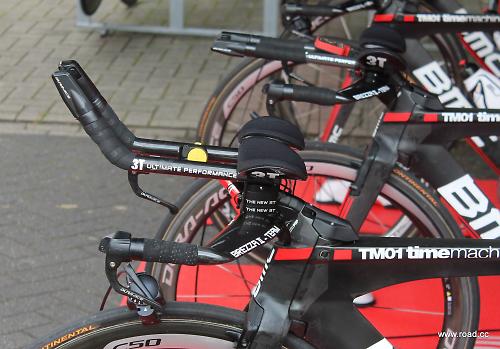 The two schools of thought in time trial handlebar setup seems to be either to go as low as possible, or to raise the stack height and use j-bend bars to position the hands in a near vertical position. Astana also use the Specialized Shiv but dressed with Corima wheels and a Campagnolo drivetrain. 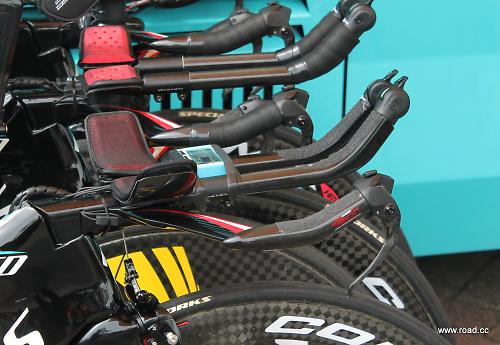 Look inside every cyclists toolbox and there's a roll (or two) of electrical tape. It's versatile stuff, and can be used in just about any application. SRM don't produce a decent mount to attach the PowerControl unit to the extension bars, so the mechanics whip out a roll of leccy tape and get creative. Notice also the textured material applied in strips to the extensions, again to give extra grip. 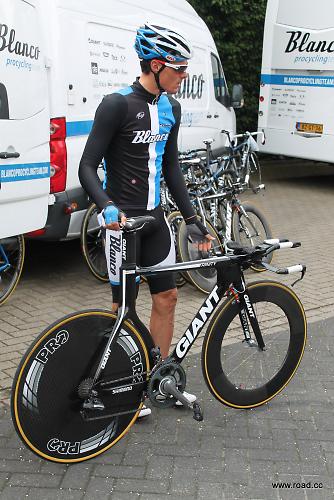 Giant released their Trinity time trial bike a good few years ago, and it followed the trend at the time for a stem intregrated into the top tube of the frame creating a very flat and unobstructed top tube, dramatically curved seat tube and aero downtube. It's a very clean looking design, with internally routed cables and the rear brake hidden behind the bottom bracket. Oh, that's none other than Luis León Sánchez holding the bike for me, nice chap that he is... 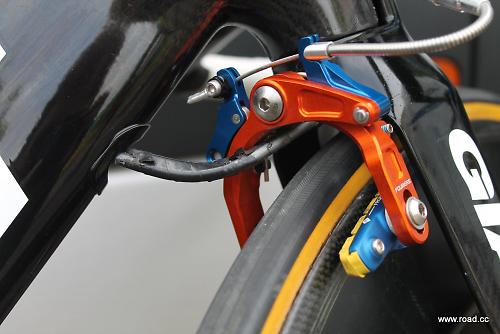 The front brake isn't an integrated type, but is situated at the rear of the fork. The cables route in through the top of the fork and exit at the bottom of the extended stem, in front of the frame, passing through the brake caliper and into the downtube. As this photo shows, it perhaps isn't the neatest solution, the tattiness of the electrical tape securing the two gear cables together showing there's some interference occuring. 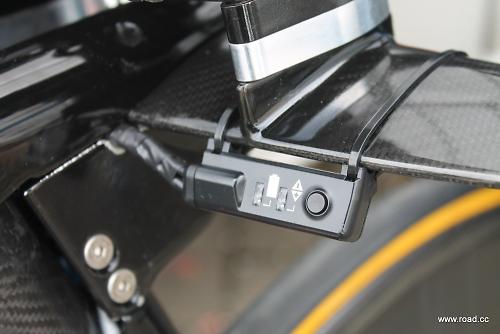 Time trial bikes, concerned as they are with reducing drag and becoming ever more integrated, presents certain problems when building them up. Such as where to fit the Shimano Di2 control box. The enterprising Blanco mechanics had zip tied them to the base bar. Their enterprising ways also resort to the mount for the computer. A piece of curved alloy bridged between the extensions to give a secure place to mount a cycle computer. 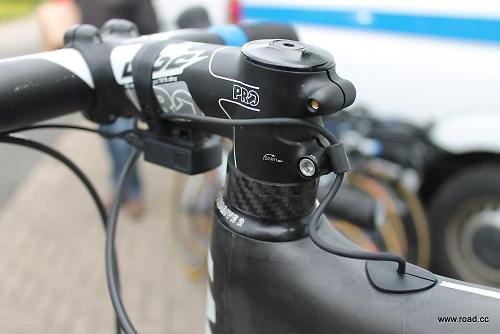 This is a neat trick. A little rubber hoop wraps around the lower steerer tube stem bolt and keeps the Di2 wire from flapping around, as it passes from the control box into the top tube. 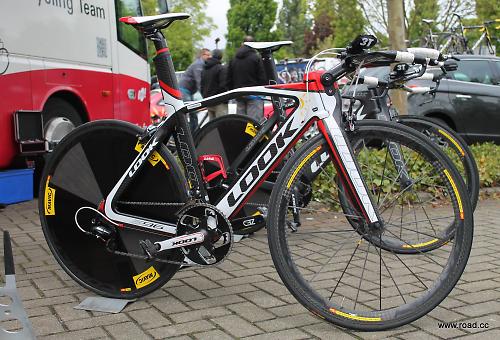 Look's 569 is striking to behold in a way only the French manufacturer seems able to do. Their own stem design offers a wide range of easily adjusted height difference. 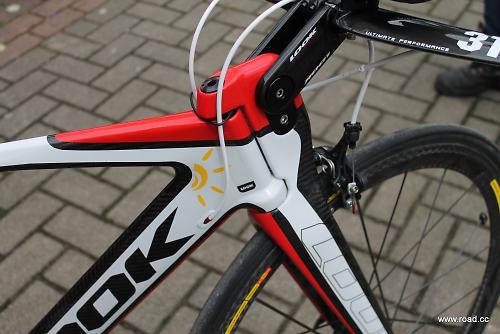 Cable routing is quite clean and simple, passing out the back of the extension bars and dropping straight into the down tube. A small rubber band placed around the stem keeps the cables tidy. Low-tech but effective. 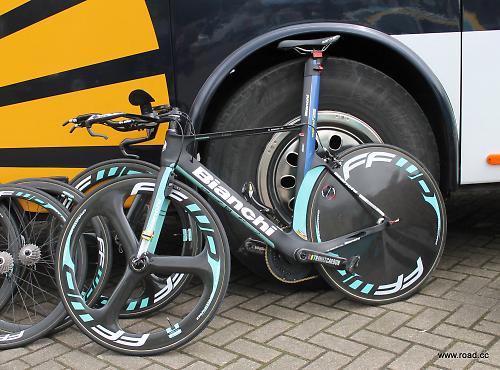 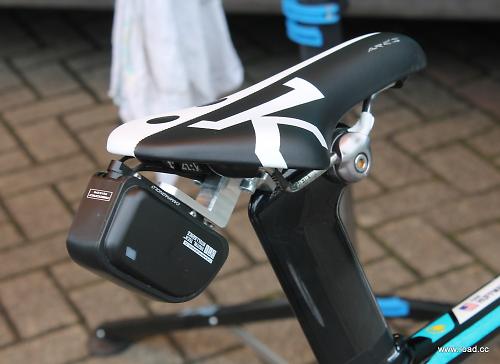 Here's a novel solution for the problem of where to mount the Campagnolo EPS battery, with a custom metal bracket attached to the saddle rails. 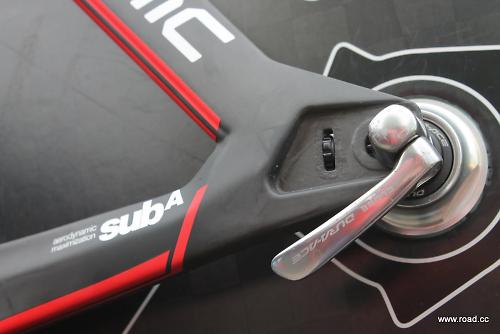 The BMC TimeMachine frame has horizontal track-style dropouts, and they've designed adjustable stops with a knurled dial to wind them in and out. The time trial was only a short stage, with the winning time just 17 minutes 42 seconds. Pretty much every racer was on a time trial bike, with the exception of Sep Vanmarke (runner up to Fabian Cancellara at Paris-Roubaix earlier this year let's not forget) had opted instead to affix some extensions to the handlebars of his TCR. 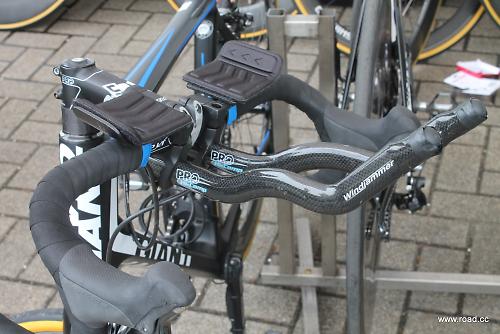 We're not sure on the reason for this, perhaps he wasn't too bothered about the time trial, his time trial bike wasn't available for some reason, or perhaps he felt more comfortable on his road bike and felt the short stage, which did feature a handful of narrow country lanes and tight 90 degree corners in quick succession, didn't require a fully fledged time trial setup.