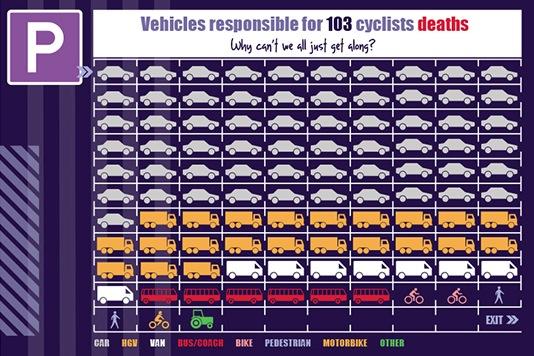 Osbornes Solicitors has produced a video and accompanying infographic focusing on issues associated with cycle safety, as well as highlighting some of the benefits of cycling and providing tips on how to stay safe.

The law firm says that despite the "startling figure" of nearly 3,000 cyclists being killed or seriously injured on the country's roads each year, "we are told that Britain holds one of the best road safety records in the world."

It goes on: "There is clearly much that remains to be done before we have full confidence in the safety of our roads. To highlight the importance of cycling in our society, as well as shine a light on the risks cyclists face on our roads each day."

According to Osbornes, the video has been created using statistics from the Royal Society for the Prevention of Acccidents (RoSPA), although we've double checked the casualty figures which appear in turn to have been taken from the Department for Transport's Reported Road Casualties for Great Britain 2011 Annual Report, and therfore relate to the year 2010.

One thing that jumped out at us there, seeing the fatalities for that year presented in graphic form, was that two of the cyclist fatalities resulted from collisions in which a pedestrian was involved, and two with another cyclist.

The firm of solicitors says that of the total 17,000 cyclist casualty figure, "Most of these occur during the daytime and, shockingly, 20% of those killed are injured are children. It seems strange then, that Britain holds one of the best cycle safety rankings for children in Europe.

"Despite these risks, it adds, "the advantages of cycling must not be overlooked. In fact, the benefits gained from cycling actually far outweigh the dangers. For example, you can burn around 600 calories for every hour of cycling, which is great news for your health. It’s beneficial to environment too, with over 1000km to be travelled on the energy equivalent of a single litre of petrol."

Osbornes concludes: "There are still huge measures that must be implemented before cyclists and motorists can use UK roads safely together. Although the government is taking steps towards improvements it’s essential that road users do what they can to protect themselves from injury."