It was a sodden stage 12 of the Giro d’Italia in which Mark Cavendish clinched his 100th career victory, catapulting him into the records books alongside other legends of the sport. 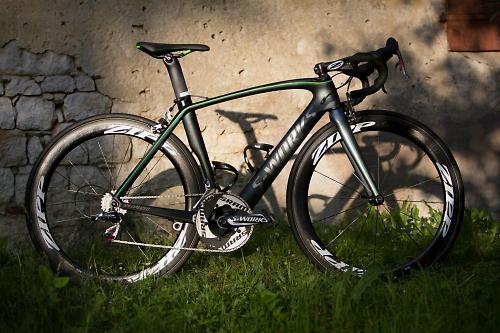 Specialized are marking this occasion with the S-Works Venge Cavendish frameset. it's a limited edition frame to celebrate not just this milestone, but also the green jersey he won at the 2011 Tour de France, plus his many stage wins in the Tour and Giro, and of course the World Championships. A lot of race winning, and all celebrated in this specially painted frame. The frame, available only in limited numbers, is based on the same carbon fibre Venge that Cav races on a regular basis, but with a matte black base colour with a sharp green stripe running the length of the top tube and seat stays. Notable victories and dates, including his 23 stage wins in the Tour de France, are printed across the top of the top tube. His signature is printed on the bottom bracket shell, at the junction with the down tube. The green stripe continues around the head tube and on down the fork. 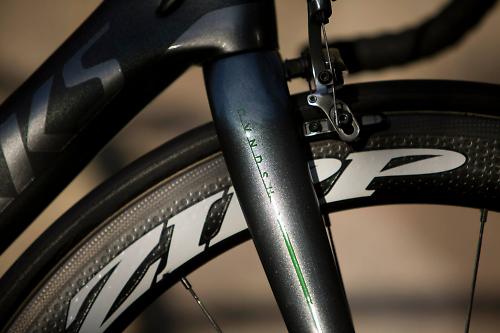 Cav will be racing this bike, built up with some matching green components, for the rest of the Giro d'Italia, so keep any eye out for it. 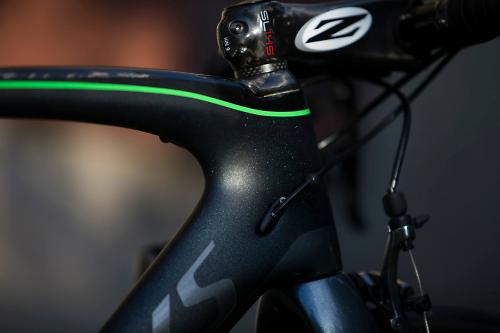 “It’s a bike that I believe is the fastest bike in the world,” says Cav.  “It’s the aerodynamics more than anything,” he continues. “It really is incredibly fast like nothing else you can ever imagine.” And it clearly does the job in the sprint finish, Cav is just about unbeatable in the gallop for the finish line.

The Venge represents Specialized’s first foray into the aero road bike market, and launched in 2011. The profiles of the tubes are shaped to a 3:1 airfoil specification, seen in the head tube, seat tube and most easily in the down tube. The fork blades too are shaped to decrease drag. There’s a tapered head tube up front, but with 1 1/8in-1-3/8in bearing diameters, and beefy chainstays to ensure Cav’s energy goes into propelling the bike forwards, and not sideways.

A UK price hasn't been announced yet, but we do know it'll cost $3,750.00. So it probably won't be far off that once it's converted into Sterling.