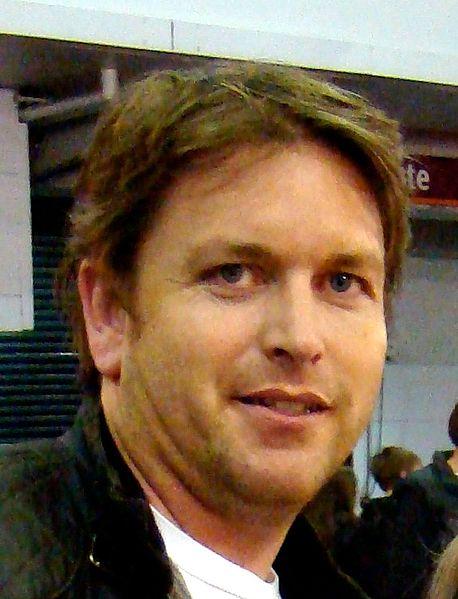 Updated: James Martin puts his foot in it with cyclists and Tesla aren't happy either

Oh dear, oh dear. Taxi for Martin! And preferably one that gets stuck behind 100 cyclists. Celebrity chef and motors writer James Martin served the foot in mouth dish to himself yesterday in an article that appeared in the Live magazine supplement in the Mail on Sunday and the Daily Mail online. So far he's received short shrift from amongst others Bradley Wiggins and the CTC.

In a review article on the Tesla Roadster Martin not only lays into cyclists, but also admits to committing a dangerous driving offence too.

Martin was quoted in his article: “But whenever I drive to London...without fail a cyclist will rap on my window and make some holier-than-thou comment, before zooming off¬ through a red light where he knows I can't get him.

“God, I hate those cyclists. Every last herbal tea-drinking, Harriet Harman-voting one of them. That's one of the reasons I live in the countryside, where birds tweet, horses roam, pigs grunt and Lycra-clad buttocks are miles away. But recently, there's been a disturbing development.

“Each Saturday, a big black truck appears at the bottom of my road, with bikes stuck to the roof and rear. Out of it step a bunch of City-boy ponces in fluorescent Spider-Man outfits, shades, bum bags and stupid cleated shoes, who then pedal around our narrow lanes four abreast with their private parts alarmingly apparent. Do they enjoy it? They never smile. I'm sure they just come here to wind me up.”

After taking the Tesla out for a spin Martin had this gem to report: “Twenty minutes into my test drive I pulled round a leafy bend, enjoying the birdsong - and spotted those damned Spider-Man cyclists. Knowing they wouldn't hear me coming, I stepped on the gas, waited until the split second before I overtook them, then gave them an almighty blast on the horn at the exact same time I passed them at speed.

“The look of sheer terror as they tottered into the hedge was the best thing I've ever seen in my rear-view mirror. I think this could be the car for me."

The article has prompted Bradley Wiggins to tweet about it on social networking site Twitter: “Everyone check out on the web what JAMES MARTIN, TV chef thinks about the thousands of cyclists that enjoy riding bikes around the lanes.”

And the CTC weren't slow to respond either Speaking this afternoon CTC’s Campaigns and Policy Manager Roger Geffen said:

"James Martin’s comments and actions are both offensive and dangerous to cyclists. We urge the group of cyclists, who James Martin attempted to run off the road, to get in touch with CTC’s Accident Helpline. Our legal team would be only too happy to take the matter further.

"Surely, these comments should have been seen as unacceptable, even in the Mail on Sunday. We are appalled that James Martin thought his actions were amusing, when they could easily have caused death or serious injury."

And Mail readers have been quick to post comments on the mail online article and have been less than complimentary about the celebrity chef, calling him a “twit” and a “moron”.

Andy Clayton, from Nottingham, posted: “James Martin you are a moron. I cycle for pleasure and to work (from the countryside I might add). I do so because it keeps me fit, saves money and is environmentally friendly, but mostly because it is fun. I have never wrapped on anyone's window or jumped a red light.

“I cannot believe the last part of this article where you describe wilfully trying to injure cyclists. this might seem a joke to you but many cars do overtake dangerously with no regard to the safety of cyclists. Cyclists are killed every year by people like you driving dangerously, we have spouses and children who you leave without parents. This is not a joke.

“Most drivers thankfully are careful and courteous, the minority do not need further encouragement to drive dangerously from idiots like you.”

Unfortunately for Martin he will be feeling the wrath of cyclists even more now. If you live in the countryside James, why not stay there next time and do us all a favour eh?

UPDATE 14/09/09 A spokesperson for Tesla distanced them from the comments on a US cycle podcast, The Fred Cast, yesterday.

Tesla’s senior communications manager Rachel Konrad, in Germany for an Auto Show, said that she had received numerous emails from UK cyclists for Martin to issue an apology over the review, which gives the car the thumbs up.

Konrad, who takes part in critical mass cycle rides in the US, said: “Tesla has no direct control over James, over the Daily Mail or any critics writing about Tesla. We give them our cars so they can write an independent review. He is not paid by Tesla and we don’t endorse him....No one saw the article as it went out and we had no editorial control over it at all."

But Martin has clearly scored an own goal with the company because not only is the Tesla the greenest car for sale at the moment, but Konrad said the company have a lot of dedicated staff and customers who are environmentalists.

And Konrad said that, while they would always publish such a great review of a Tesla on their website and in promotional material, “in this case we’re not even using it.”

UPDATE 15/09/09 The Daily Mail has bowed under the increasing pressure and removed the final section of the 'review' – as well as all the comments on the story, none of which were very positive about Martin or his stance on cycling. They've kept the bits about hating cyclists though. Meanwhile, the 'I hate James Martin' group on Facebook has swelled its numbers to over 1,500